Village relocated due to climate change

With sea levels rising, the villagers of Vunidogoloa in Fiji have been forced to move to higher lands 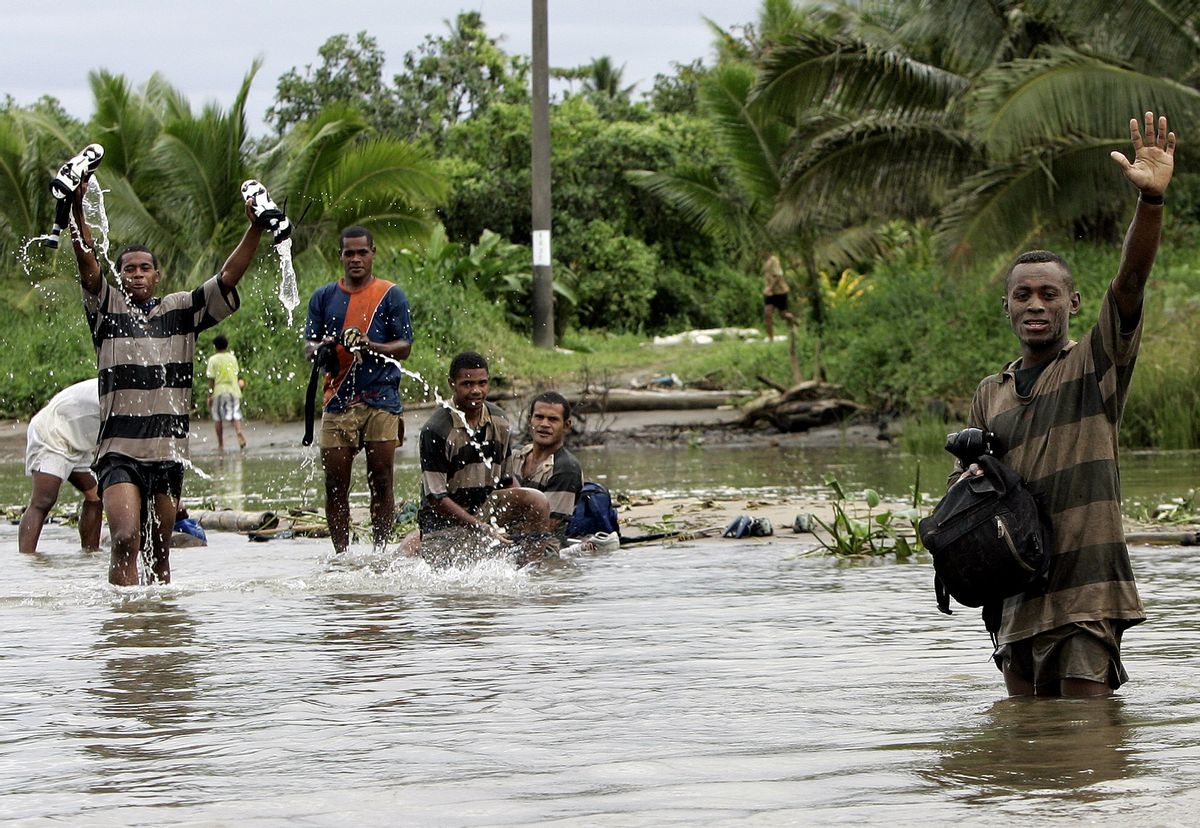 For the most part, many people still experience climate change on an academic rather than a personal level. But for the villagers of Vunidogoloa on Vanua Levu, Fiji’s second largest island, climate change has become a daily intrusion on every day life. The villagers of Vunidogoloa are currently relocating to drier and higher land because of sea level rise, erosion, and intensifying floods. I had the opportunity to visit the village midway through this process – one of the very first village relocation projects in the world – and spoke with people young and old about their upcoming move.

Throughout 2012, these Fijian villagers have been in the process of moving from their current home village – a tract of land overlooking Natawa Bay, the largest bay in the South Pacific, to their new home which they named Kenani, Fijian for Canaan, the biblical “promised land.” Last month, I visited both sites - the seaside village that is now uninhabitable and the mountaintop site of their intended new home. I talked with the villagers about their feelings, hopes, and fears, as they become one of the very first villages in the world to be wholly relocated as a result of the effects of climate change.

An increasing number of coastal communities around the world are faced with the issue of relocation because of sea level rise, among other environmental and climate change related issues. In most cases, these individuals and their communities contribute very little to anthropogenic climate change, yet they are feeling the proverbial heat in a much more profound and potentially devastating way. Some villagers, like those in Vunidogoloa and their promised land, eagerly and proactively participate in the process of relocation. But for others, everything that comes along with relocation, including property rights issues, a lack of finances, the inevitable culture loss, and a host of other complex problems, is a much more traumatic topic. Scientists and academics predict that this phenomenon will worsen as global emissions rise and polar ice continues to melt. There is no time like the present to learn from those villages around the globe that are testing the waters of relocation.

From the cosmopolitan and tourist-friendly city of Nadi on Fiji’s main island of Vitu Levu, I took a short plane flight to Suva, Fiji’s busy and industrial capitol. From there, I caught a plane to the Indio-Fijian sugarcane town of Labasa on the island of Vanua Levu, which is, to my delight, off the radar for most international tourists. It was impossible to find Vunidogoloa village on Google maps (I tried), so I drove to the seaside town of Savusavu on Vanua Levu’s southern coast to pick up Tomasi, a Fiji Ministry of Health official who works with the local villages on climate change issues as they relate to public health and welfare.

Tomasi was well aware of the village of Vunidogoloa and was kind enough to escort me for the hour’s drive down the twisted, potholed, barely marked road. Once we arrived at the village, it was pouring rain - a sobering and very visual reminder to me that this is not a story with a fairytale ending.  Fijian beauty abounded along the drive – tropical yet bucolic scenery of coconut palms, the farmers and their children eagerly grinning and waving down the passing cars, and baby pigs scurrying across the road. But, it was important to remember that my destination was a village that, despite its lack of contribution to global warming, was being forced to move from its ancestral home due to a rising sea level.

However, in typical Fijian fashion, after a wet and bumpy sojourn down a long path towards the water, I was jovially met with smiling friendly faces and warm hugs. The villagers were gathered in a rudimentary open-air hut, where the women were making brightly colored handicrafts for an upcoming wedding. We were beckoned to join, and ran to escape the rain.

After making the rounds of introductions, I settled in next to Tomasi, who agreed to interpret some of the more nuanced aspects of the interview. The mood changed and now matched the weather -- the atmosphere grew solemn as I began asking questions about the upcoming move.

Samuela Banicau, a village elder and one of the masterminds behind the relocation project, took the lead in answering my questions. He explained his sadness about the need to move to higher ground, and those sitting around him nodded in agreement. He talked about how much the children love their beachside location and playing in the water. He told me that decades ago the village was truly an idyllic spot. There were home gardens, breadfruit and coconut trees, and houses that stayed dry most of the year. Now, high tide frequently meant that the plants and crops were bathed in salt water. In fact, the village site was probably the most barren area that I saw during my entire trip. Their homes are now on stilts, and even so, villagers reported frequent flooding into their dwellings.

Samuela also described the new home site, up in the hills, just one kilometer inland from where we were currently sitting. At this point women jumped in to answer my questions, often barely audible through generous giggles. I asked if they were able to choose the orientation of their homes, or in any way direct and design any aspect of the move. Even more giggling ensued, and several women took the time to describe aspects of the move that they were excited about.

The issue of climate change relocation is a topic I broach often with people in low-lying coastal regions around the world. I can safely say that this particular conversation was one of the most cheerful I have ever been a part of. The villagers of Vunidogoloa chose their “promised land” site, which goes a long way in explaining their enthusiasm for their upcoming move. But, considering the fact that the village is relocating close by, and that the move is well supported by the government, their enthusiasm is less surprising.

The Fijian government is contributing two-thirds of the capital for the move, which includes labor, materials, finances, and design work. When the elders of Vunidogoloa asked the government to move them, the government simply asked for the village to cover a third. In the end, the village provided local wood as building material and labor to the cause.

As we made our way to the new village site, the rain subsided. We drove up the sloping hill to the site and walked around the leveled area -- an expansive piece of property. I spoke with Manoa Rokotobitobi, one of the leaders of the building project, a man already living in a house adjacent to the site. He said that the village had been discussing the move for ten years and finally decided to ask for help. There was one house already positioned and ready in the new village site, and the other 29 are anticipated to be completed in approximately six months. He reported that many other village leaders had stopped by to ask questions and seek advice for their own potential moves. (I informally verified this through the village “guest book,” which has signatures from visitors from numerous other villages.)

This project is the first settlement or village in Fiji to have made a formal request to the government to be moved due to climate change impacts, and in fact, one of the first villages to make this formal request, successfully, in the world.

Rokotobitobi told us that he realizes there are low lying communities in the world who face similar impacts that have not received the same support. He goes so far as to call his village “lucky.” Of course, he is right. Yet his village is tragically unlucky in that they have no choice but to move. At the same time, they are also incredibly fortunate in that they have government backing.

The estimated new 30 homes, which will cost about $15,000 each, will house the approximately 150 villagers who are relocating.The village will include improvements such as solar power and a natural water supply system. In the meantime, while waiting for their houses to be finished, the village has conducted workshops that memorialize their history and experience with the land, and also teach about climate change impacts and future projections.

While I was at the village, Samuela Banicau took me down to the water, where several young boys were playing in the bay. Despite the stormy weather, they seemed at ease in their play, running and jumping into the sea, wild and boyish. I spent some time with them in the mushy wet sand, trying to get a sense of their feelings about the upcoming move. It was all giggles though, as school had just let out for a two-week holiday and playing was the only thing on their agenda.

However, as we turned to leave, with our cameras rolling, the boys broke out into an unscripted Maori Haka-like warrior dance. They moved together with synchronicity and command. As I walked away towards the car, I realized that they may have no choice but to move, but it will take a lot more than one kilometer to separate this village from their traditional way of life. Other villages may not be so lucky.