A new ad seeks to "expose" Obama's "cozy ties" with the Islamic group, but won't expose who's funding it 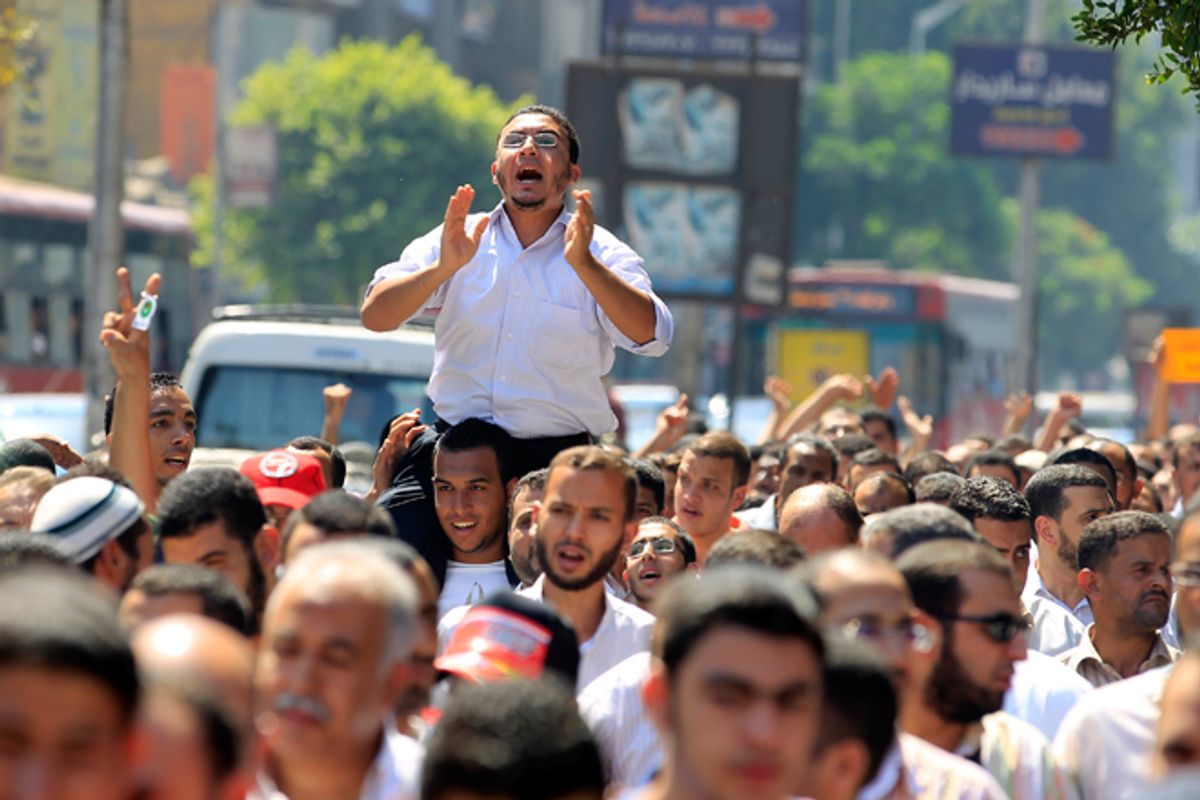 A man cheers during a Muslim Brotherhood protest in Cairo in support of the uprising in Syria. (Reuters/Mohamed Abd El Ghany)
--

Tired of political ads about jobs and the economy and the deficit? The conservative group Let Freedom Ring will break that monotony with a new spot straight out of the Michele Bachmann school of Muslim scaremongering. The new online ad, part of a $7 million campaign targeting swing states, seeks to “expose” President Obama’s “cozy ties with the Muslim Brotherhood,” according to a press release.

The ad features ominous music behind scenes of scary brown people rallying with Egypt's new president, Mohamed Morsi, who is a member of the Muslim Brotherhood party. Another image shows an Islamic crossed-swords seal superimposed on the White House. The female narrator, sounding genuinely hurt and confused, asks Obama, “You invited the Muslim Brotherhood to the White House? Legitimizing a group that wants to undermine America and destroy Israel?”

Indeed, a Muslim Brotherhood delegation was invited to the White House after the party won Egyptian’s elections in the country’s first democratic elections. The ad does not mention Obama distancing himself from the Muslim Brotherhood-led country last week in a minor diplomatic flub that was closer to the hawkish views of the ad’s creators than the apologetic ones it claims Obama holds. “You sent them 1.5 billion of our taxpayer dollars? Why, Mr. President, why?” the narrator continues. The U.S does send billions of dollars in military aid to Egypt, but the practice started under former dictator Hosni Mubarak.

The ad neatly picks up on Mitt Romney’s aborted narrative of the attacks last week on U.S. diplomatic outposts in the Middle East. “After our embassies were stormed, President Obama’s administration offered apologies while the Muslim Brotherhood stood by as we were attacked,” Let Freedom Ring president Colin Hanna said in a statement. “Instead of confronting our enemies such as the Muslim Brotherhood, Obama kowtows to them. We must shine a light on his record that ultimately weakens our image abroad and emboldens our most dangerous enemies.”

Who’s behind the ad? Unfortunately, we will likely never know. Let Freedom Ring is a 501(c)4 “social welfare” organization, meaning it does not have to disclose its donors. Salon's request for more information from the group was not immediately returned. A court ruling in a case brought by Democratic Rep. Chris Van Hollen would have required 501(c)4s to disclose donor information if ads fell within a certain window before an election, but unfortunately, a higher court overturned that ruling yesterday.