Anti-US protests: Was it all politics? 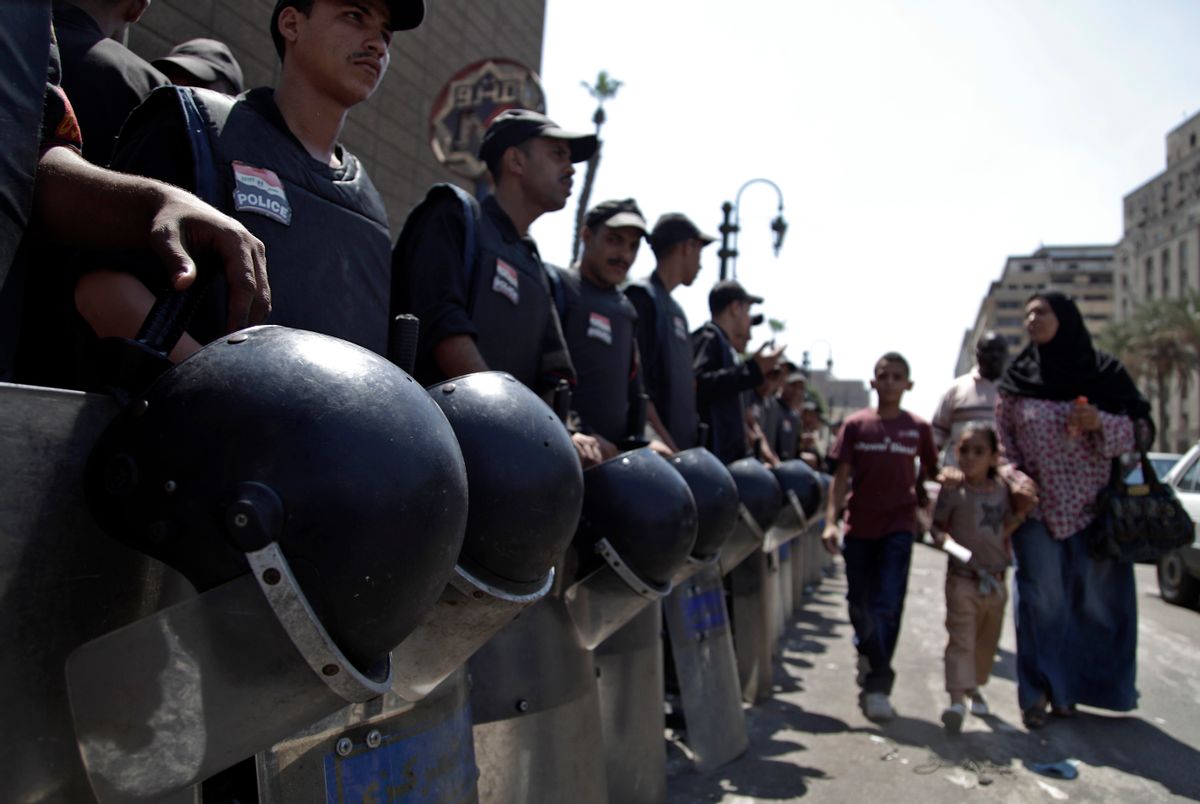 It was Salafi-Islamist groups, more conservative than, and politically at odds with, the ruling Muslim Brotherhood, which made the first calls for protests outside the US Embassy in Cairo last week.

Since then, some of those same groups have openly pressured Egyptian President Mohamed Morsi, a longtime leader of the Brotherhood, to take a more hardline stance against the United States for “allowing” the anti-Islam film — which was used as a rallying point for the unrest — to be produced on its soil.

Morsi’s initial reluctance to condemn the storming at the US Embassy, which provoked the ire of the Obama administration, was largely viewed as a move to appease local, more extreme Islamic political groups.

Protesters outside the mission had chanted: “Morsi, Morsi, why are you silent? Isn’t this your prophet?”

Analysts say the amateur film, which denigrates the Prophet Muhammad, and subsequent melee, gave Salafis the opportunity to shore up their “Islamic” credentials vis-à-vis Morsi, who has sidelined the ultra-orthodox group in his new government.

The events could mark the start of a more fierce rivalry between the two political organizations over who speaks for Islam in Egypt, especially as parties gear up for fresh parliamentary elections later this year. Both the film and US-Egyptian relations may turnout to be a just side note in a local battle for power.

“Today, there is a lot more room for political forces to organize,” including the Islamists, political analyst at Al Ahram Center for Political and Strategic Studies, Ziad Akl, told GlobalPost last week.

“It tells you that there is a radical Islamist stream on the rise,” he said. If Morsi is tougher on the protesters and Muslim critics than he is on the film, “the state will be sucked into a mechanism of political compromise that does not give him any room to suppress radical movements.”

It was, in fact, a Salafi-supported television channel — Al Nas — that first aired the controversial video.

Whether the anchor — the polarizing Sheikh Khaled Abdullah — intended to put Morsi in a tight spot politically, where he would be forced to balance public opinion with international commitments to an unpopular United States, remains unclear.

But Salafi groups, already unhappy with Morsi for political reasons and which would seek the implementation of their interpretation of Islamic law, seized the occasion to push back and chide the president for not being the first to condemn the video.

Jama’a al-Islamiya is one such organization. A former terrorist group brought into the political fray, Jama’a announced several days before the protest that they were considering breaking their political alliance with the Muslim Brotherhood’s Freedom and Justice Party because Jama’a delegates were left out of both ministerial appointments and positions on the National Human Rights Council.

Following the protest at the US Embassy, Jama’a officials first called on Morsi to cancel a planned visit to the United States, and then demanded he sever relations with the Obama administration entirely.

The Salafis will now challenge the Brotherhood at the polls by asking voters to decide, “Which is the more devout party, and which party is more likely to apply Sharia,” said Kamal Habib, a former Egyptian Jama’a leader who is now a political analyst.

“It will affect the Brotherhood negatively,” he said.

The Salafi Al Nour party, already dismayed at having been shut out of cabinet posts despite winning about 25 percent of the seats in a now-dissolved parliament, also hit back at the Brotherhood over the film.

In a recent post on their official Facebook page, Al Nour said that since being elected, Morsi had not officially communicated with or consulted with any of their officials.

“As Salafis, we feel he [Morsi] could do more to defend Islam,” said Sameh Abd Al Hamid, a member of the Al Nour party that backed the US Embassy protest, told GlobalPost. “I don’t think he should officially apologize [to the US].”

Al Nour members of the 100-member constituent assembly, which is drafting Egypt’s new constitution, are pushing hard to include an article that criminalizes blasphemy.

“We want Sharia [law] implemented and part of that includes not blaspheming God,” Al Hamid said.

If Morsi or the Brotherhood, also on the constituent assembly, hesitates throwing their weight behind a blasphemy clause, they run the risk of deepening an already growing rift between them and the Salafis.

“It’s true. Their politics,” Al Hamid said, referring to the Brotherhood, “are becoming increasingly more different than ours.”