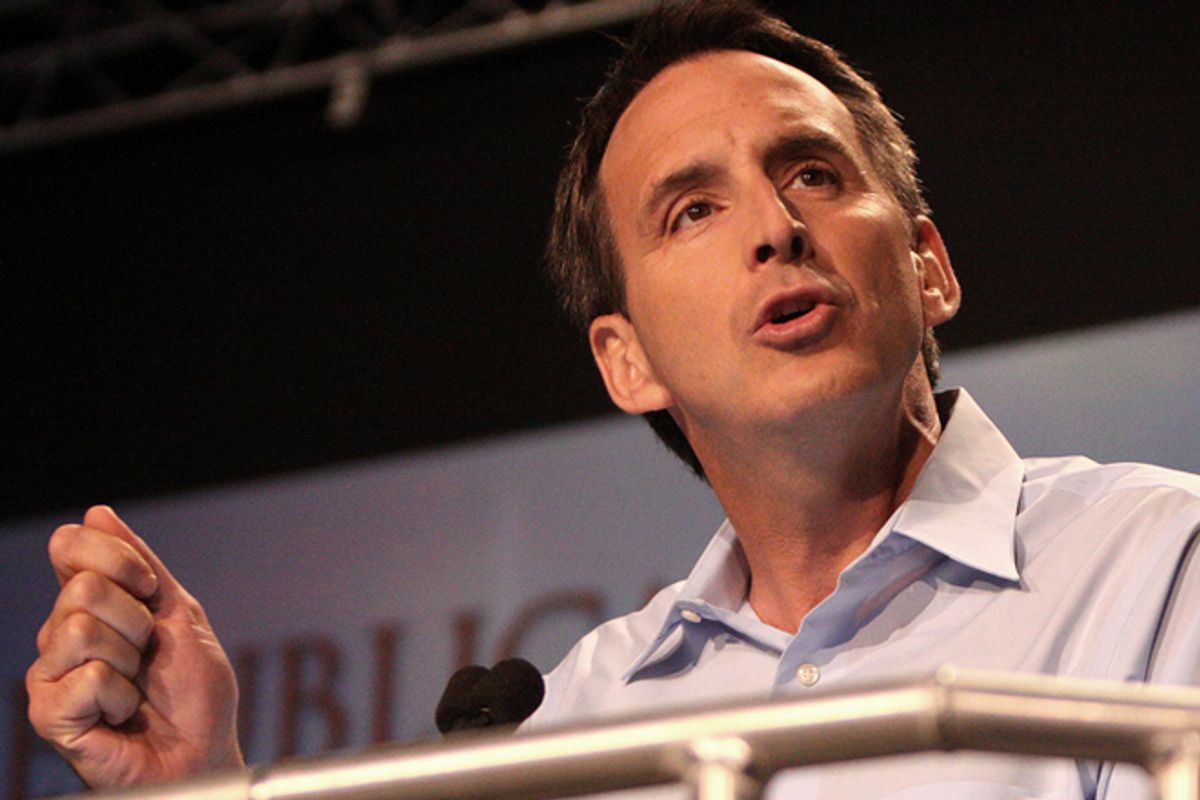 It seems like a lifetime ago, but at one point, Tim Pawlenty, the former governor of Minnesota, seemed to have a decent shot at becoming president. In a field of loons and crazies, Pawlenty's biggest drawback was merely his extraordinary blandness.

But then came the disastrous third-place finish at the Iowa straw poll, and Pawlenty promptly quit the race. It's hard to blame him -- nothing says "loser" quite as much as getting thumped by Michele Bachmann. Not to worry, though, as he emerged not long afterward as a co-chairman of Mitt Romney's campaign, with a potential chance of becoming the vice-presidential nominee or at least getting a juicy Cabinet position.

One thing we know about Tim Pawlenty: He is not afraid to quit! Today, the Financial Services Roundtable, Wall Street's deepest pocketed and most influential lobbying organization, announced that Pawlenty is leaving Romney's campaign to  become its new leader, replacing longtime head Steve Bartlett. See ya later, Romney!

Twitter greeted the news with a million-and-one variations of rats-vacating-sinking-ships metaphors, but Pawlenty's move is meaningful for much more than what it signals about the state of Romney's foundering campaign. Think of it this way: As a consolation prize for not being nominated as president, Pawlenty gets a $2 million-a-year job defending a lobbying group whose fingerprints are all over the great financial crash crime scene. What more do we need to know about the corrupt state of modern American politics? Pawlenty could have been president -- instead, his job will now be to dismantle and obstruct financial sector legislation.

A quick look at the resume of the man Pawlenty is replacing is instructive. Steve Bartlett, a former Texas congressman and mayor of Dallas, was hired by the Roundtable, according to his own account, in large part to lobby for the passage of Gramm-Leach-Bliley, the landmark piece of banking sector deregulation that repealed Glass-Steagall, and paved the way to the excesses that fueled the crash. Bartlett's biography also includes, as his major achievements, the 2001-2003 tax cuts, class action reform, consumer bankruptcy reform and TARP. In the last couple of years, his No. 1 job has been to defang the Dodd-Frank bank reform act -- or, as he likes to put it, to "reform the reform."

In other words, Steve Bartlett was public enemy No. 1. His career as a lobbyist was devoted to loosening restrictions on banks, cutting taxes for corporations and the wealthy, and simultaneously making it more difficult for individuals to sue corporations but  harder for individuals to declare bankruptcy. Steve Bartlett is one of the reasons why you can't discharge your student loan debt in a bankruptcy filing but Citigroup can get $88 billion to avoid bankruptcy. And when everything blew up, not only did Bartlett help push for the biggest bailout Wall Street has ever received, but when Congress set about the crucial task of writing new rules that would restrain Wall Street recklessness, he fought them tooth and nail. That's quite a record of success for him -- if not for the country.

So that's Tim Pawlenty's new job: To be paid millions of dollars a year to fight against burdensome regulation of the banks. To represent the richest and most powerful players in the U.S. economy in their unceasing struggle to maximize their profits at the expense of everyone else.

Guess coming in third in the Iowa straw poll wasn't so bad, after all, for Pawlenty. As for the rest of us, we can only hope that he is as successful in his lobbying efforts as he was running for president.