Can this activist save Arizona? 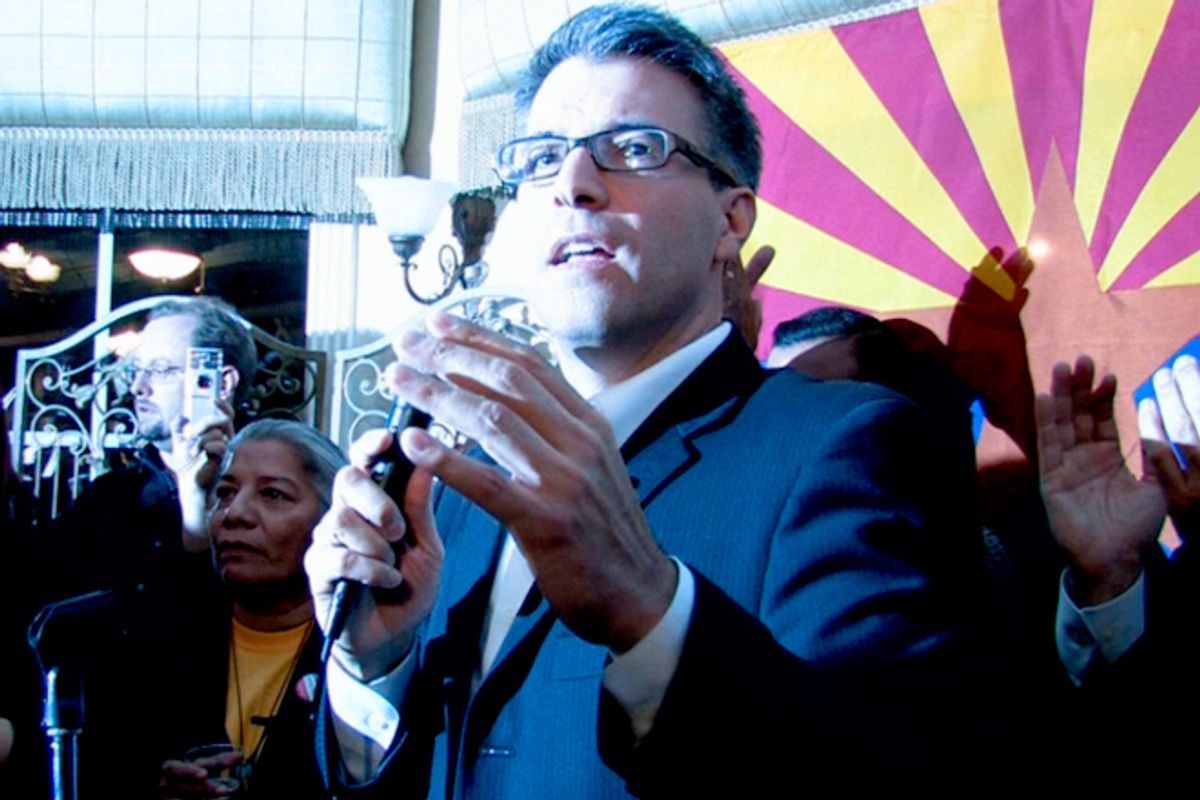 Excerpted from "State Out of the Union: Arizona and the Final Showdown over the American Dream"

In the spring of 2008, after a short period of organizing immigrant construction workers for the Laborers’ International Union, Randy Parraz decided to launch his first battle in the Phoenix area to expose civil rights abuses, including racial profiling. Parraz was not dealing with Russell Pearce’s legislative policies but with the dragnet practices of [Maricopa County] Sheriff [Joe] Arpaio, whose immigrant crime sweeps had been spiraling unchecked in targeted Latino neighborhoods.

Establishing the Maricopa Citizens for Safety and Accountability, Parraz and his supporters appealed to the Maricopa County Board of Supervisors to address Arpaio’s 20-year reign of fear and clampdown. Over several months, Parraz’s group filed petitions and complaints, and turned out in scores at board meetings, but never managed to nudge the equivocating board into action.

And perhaps for good reason. Arpaio had teamed up with disgraced Maricopa County attorney Andrew Thomas to launch a bizarre witch hunt against county employees and supervisors who had questioned his reign of terror. It took years and a few destroyed careers before Thomas was finally called before an ethics hearing and tried for fraud and dishonest conduct in filing frivolous criminal and civil cases to harass his rivals, and disbarred from the courtroom.

When Parraz and others spoke out at a Board of Supervisors meeting on Sept. 26, 2008, knowingly without the permission of the board chairman, they understood that the rules required a warning and then ejection from the meeting. After Parraz delivered a six-second appeal for the board to place the group’s concerns on the agenda for public consideration, he left the chambers.

A moderate Republican attorney, [Chad] Snow had attended the meeting out of curiosity. Arpaio’s antics had perked up his ears; he felt the sheriff had evolved over the years into an increasingly corrupt self-promoter. Snow had never met Parraz; in fact, he could not have identified him in the room without someone’s help. Once the board meeting was adjourned, Snow rose to leave, but he found himself sandwiched between two sheriff deputies. “They grabbed me, grabbed my stuff,” Snow told me, leaning back in his chair at his Phoenix office, where he deals with workmen’s compensation suits. “They threw handcuffs on me, and I’m wondering, What the hell is going on?”

Five minutes of confusion ensued. Snow asked why he was being detained, and if the two deputies knew he was an attorney. It wasn’t until a third deputy came down the hallway, looked at him, and announced, “Oh, that’s not him,” that Snow was released.

These are the perils of being a tall, physically fit attorney in your 40s, with a fashionably clipped haircut. Although Snow may have some passing resemblance in profile to Parraz, they couldn’t have been more different in background.

A lifelong Republican and subscriber to the Rush Limbaugh newsletter, Snow grew up in Glendale, Arizona, in a traditional Mormon family. “As I’m walking out the hallway,” Snow recalls, “I see Randy walking down in handcuffs.” Realizing he had been  mistakenly cuffed in a ploy to silence Parraz, the outraged Snow and his partner immediately hopped in their car, went down to the police station, and offered their legal services to the community organizer.

Snow never looked back. As the conservative Republican to Parraz’s liberal Democrat, the two joined forces in a campaign that arguably owed its birth to Sheriff Joe’s excessive actions.

Even with his charges dropped, Parraz still had no plans to let Arpaio off the hook. He was not alone in this matter. From 2004 to 2007, over 2,700 lawsuits of wrongdoing were filed against Arpaio in county and federal courts—more than the combined total of several cities, including New York City, Los Angeles, Chicago and Houston. Over the next few years, keeping tabs on the lawsuits against Arpaio and his office would be like playing the lottery; the stakes not only grew exponentially but also cost Maricopa County more than $45 million in damages. By the end of 2011, more than $176 million in damages and claims were being pursued in court.

“Our top cop in Maricopa County should not be under investigation for civil rights violations,” Parraz said, chronicling Arpaio’s documented abuses. “He needs to step aside so we can have a real top law enforcement officer who really cares about people’s concerns.”

Three months later, in an extraordinary act of reproach, the Department of Homeland Security stripped Arpaio of his special powers under the 287(g) program, which had effectively granted the sheriff and his county troops unchecked authority (reserved for federal jurisdiction) to target suspected undocumented immigrants.

It didn’t bother Arpaio in the least. He immediately took the stage on the Glenn Beck show and reminded the Obama administration that even though he had signed off on canceling the agreement with the Department of Homeland Security, “Nothing has changed. I’m still going to do the same thing.”

Randy Parraz sat in the meeting room of a local union headquarters in Phoenix, a picture of Martin Luther King Jr. above his head. Preoccupied, as if always in the middle of carrying out an action, he fidgeted in his seat, gazing intensely at the camera.

“It’s not where you come from,” he said, speaking at a machine-gun pace, “but what you dedicate your life to.”

Parraz had dedicated his life to his two little girls, which brought him back to Arizona in 2007 after a divorce. He had first arrived in Arizona in 2002, signing on as the state director for the national AFL-CIO, but a career in the labor movement had left him dissatisfied with its effectiveness for change.

“Labor is so beat-up,” he went on, shaking his head. “Lack of vision, lack of leadership, afraid to deal with immigration.”

This frankness about Parraz, his brash take-no-prisoners approach to community organizing, had set him apart from the entrenched but paralytic Democratic establishment in Arizona. He remained the ultimate outsider who riled insiders with his indifference to protocol. Yet his passion and sense of purpose, and his brilliant organizing tactics, had attracted a growing following of young Latinos and liberal baby boomers that inspired a rebirth of activism in the state.

“We have to create our own story,” Parraz offered.

Parraz’s own story was impressive. Raised in Sacramento, Calif., he had earned a law degree from Boalt Hall at the University of California, Berkeley, then pursued a Masters in Public Administration at Harvard’s Kennedy School. Inspired by Ernesto Cortés of the Industrial Areas Foundation and the teachings of Harvard’s Marshall Ganz, a legendary community organizer and colleague of United Farm Workers leader Cesar Chavez, Parraz found himself easing into the stream of community organizing jobs in Texas, Washington, D.C., and then Arizona.

When he witnessed the faltering pushback on SB 1070 -- the "show us your papers" law -- he shifted from his behind-the-scenes community organizer role to that of a public figure. “There are certain roles you have to take when no one else is ready to take it on,” he said.

Parraz was outraged by the Democratic Party’s failure to “rise to the challenge” in Arizona and confront the misinformation over SB 1070. “They saw it as a burden and walked away. I said, ‘Hey, let’s use this as an opportunity to organize.’ There were a lot of good people in the state who stayed quiet.”

“The signing of SB 1070 was the turning point for Randy Parraz,” the Three Sonorans blog noted, introducing him to Tucson voters in the summer of 2010. “As he said during his interview with Arizona Illustrated, his own personal threshold of injustice had been assed, and there was no strong voice against the bill from the Democratic candidate against John McCain, a supporter of the bill, so Randy decided to enter the race.”

Parraz failed to win the [2010] Democratic nomination for the Senate; but as he predicted, the state Democratic Party lost every statewide race. In the meantime, Parraz had awakened the interests of a new generation of activists in the state.

“I’m trying to get people to behave differently,” he went on. “To take risks. To protest. To tell the police to back off if they threaten your right to speech. I almost got arrested today for bringing people into the Arizona Capitol lobby. That’s how insane it is here. We were just bringing people in to educate about the jobs bill. This place is on lockdown, and we have to change that.”

For Parraz, that change came with the ascendancy of Russell Pearce to the State Senate presidency in the fall of 2010. Once the Tea Party president made it clear that he planned to pursue his radical agenda in the spring of 2011, Parraz and Chad Snow mobilized their supporters in the area to launch a recall. Citing “insurmountable odds,” the Democratic Party leadership and established media gave Parraz and his Citizens for a Better Arizona hardly any support or a sporting chance to take down the most powerful politician in Arizona. They didn’t realize Parraz had done his homework. With the Republican Party increasingly in disarray, he saw that the Tea Party’s grip on the conservative ranks was slipping; his early canvass teams reported back the surprising discovery that one out of every three or four voters in the district didn’t even know Pearce.

“It takes a lot of work,” Parraz admonished, especially to assemble a bipartisan effort. “What issue will drive them? How do you engage people in the act of politics? How do you create opportunities for people to act on their values?”

Parraz and Snow and their increasing ranks of volunteers mulled over these questions as they set up their tables in front of the Mesa Public Library to collect signatures, and then launched a door-to-door campaign. They set up a Facebook page that soon exploded with participants. Suddenly, they found themselves joined by a regular crew of retired educators and business people who were outraged by the toll that Pearce’s ideological stance was taking on the economy and greater community, including disgruntled Republicans who found his Tea Party leadership out of step with traditional conservatism as well as Latino activists and younger voters anxious to take down the architect of SB 1070.

Excerpted with permission from "State Out of the Union: Arizona and the Final Showdown Over the American Dream," by Jeff Biggers.  Available from Nation Books, a member of The Perseus Books Group.  Copyright © 2012.