Invasion of the faux cities

Shiny new cities, set in the suburbs: It's the hot development trend. Is it real urbanity, or the new white flight? 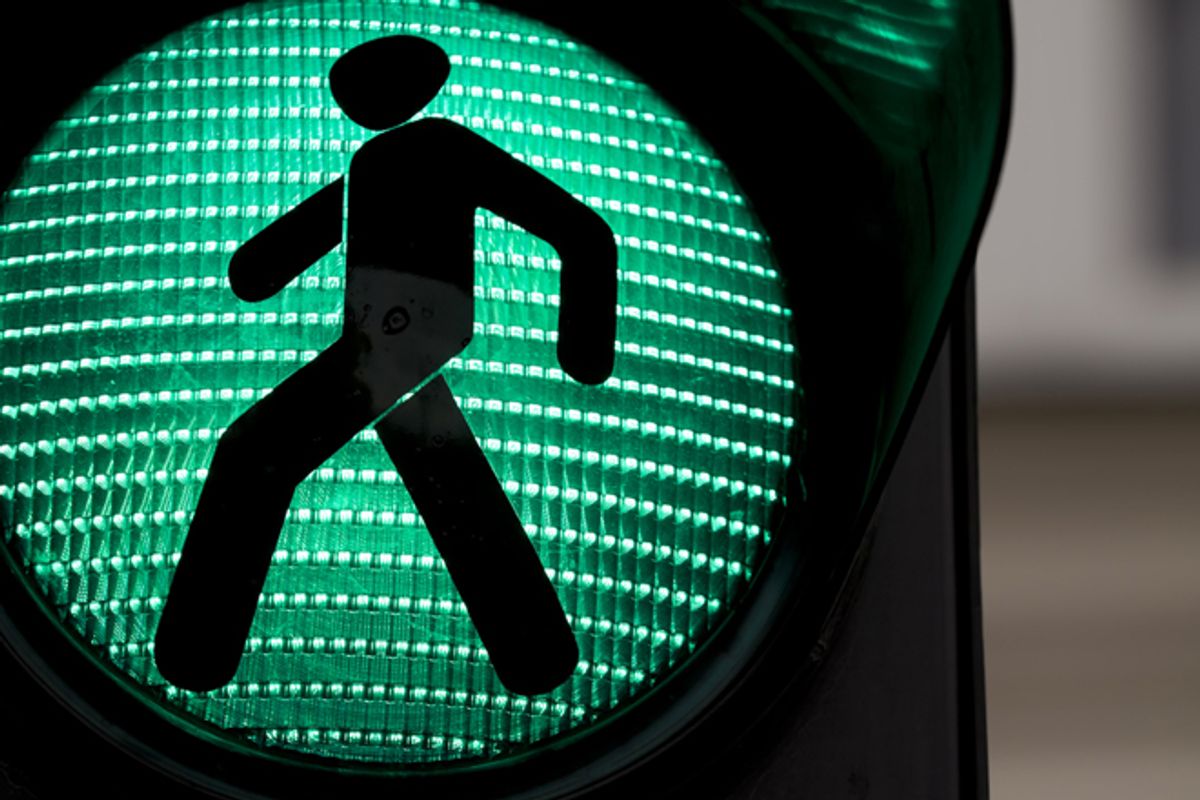 This is the essential formula proposed in a new study by renowned urbanist Christopher Leinberger, a professor at the George Washington University School of Business. Using the Washington, D.C., area as a model, Leinberger finds tremendous pent-up demand for more housing in denser, mixed-use, Walkable Urban Places -- or WalkUPs, as he dubs them.

So far, that's nothing that the average home hunter couldn't have figured out by noting that a Dupont Circle two-bedroom costs more than whole house in Woodbridge, Va., right? Except here's the rub: These WalkUPs don't have to be urban at all. They can be waaay out in cul-de-sac country -- and most of them are. "Only 42 percent of the WalkUPs are in the District of Columbia," finds Leinberger. "A surprising 58 percent are in the suburbs."

Some of them are in places like Rosslyn and Bethesda -- close-in suburbs that developed an organic urban physicality over time, in part due to Washington's anti-density height limits. But the newer ones are in towns as far away as Reston and Tysons Corner in Virginia -- urban-lifestyle villages built into the center of very low-density suburbs. They function as destinations, used by people who live in the surrounding sprawl, and contain a mix of apartment-style homes, offices and retail. They have restaurants and cafes, maybe a movie theater or bowling alley, and even lampposts and benches designed to mimic those in a historic metropolitan core.

According to the Washington Post, upward of 400 "city replicas" now exist in suburban America, some retrofitted into older towns, others built from scratch into exurban greenfield. And they're commercially successful. Homes in Washington-area WalkUPs are priced 71 percent higher per square foot than those in the rest of the metro region. "Just like the suburbs kicked [the city's] butt on retail in the 1980s, that's exactly what's going to happen with these transit-oriented urban neighborhoods that are coming up now" in the suburbs, a D.C. developer told the Post. (By transit-oriented, he means that many of them are linked to Washington, or soon will be, by the city's Metro system, not that they're transit-oriented within their own walls.)

But as much as these urban simulacra might be an improvement over the sprawl they're  jury-rigged into, you don't have to be Jane Jacobs to see that many are not what we've always thought of us "urban." If anything, they reflect suburban ideals contorted (sometimes painfully) into vaguely urbanish form, a Frankenstein of supermarkets, outdoor dining, parking lots and mock-cobblestone sidewalks.

Is there anything wrong with that? Not necessarily. The suburbs are changing -- fewer than one-third of suburban homes now have children, and empty nesters are looking for more shared spaces. "Suburban life has always been oriented around school, but now you've got people who want more social connectivity in their lives and they're finding that urban places give them that opportunity," says Ellen Dunham-Jones, a professor of architecture and urban design at Georgia Tech, who is working with Leinberger on replicating his D.C. study in Atlanta. She also points out that some of these WalkUPs are replacing obsolete shopping malls, and that the outdoor-mall quality of them could itself be an adaptation to a societal change: the ubiquitousness of air-conditioning. "When malls first started, nothing was air-conditioned," she says. "That's part of why you went to them. Today it's reversed. Most of us spend all our time in air-conditioning, and we want to spend our leisure time shopping or dining outdoors."

Then again, malls didn't purport to offer an urban experience -- they didn't have condos or office space, and only later did they add amenities like bowling alleys and movie theaters. That's why Daniel Malouff, editor of the blog BeyondDC, sees these WalkUPs as more like "starter cities" for suburbanites. "A place like Reston can introduce people who have grown up with suburbia to the idea of urbanism," he says.

The question is, what kind of urbanism is it introducing them to? Density is great for the suburbs -- especially when connected to transit that links to the city -- and Washington's suburbs are adding it quickly. Malouff recently blogged about the skyscraper boom taking place in these areas, with planned buildings towering as tall as 400 feet. Thanks to the District's age-old height restrictions, in fact, Washington, D.C., is starting to resemble Paris with its low-slung urban core surrounded by a high-rise fringe.

But does density and walkability alone make something urban? Though these outer-ring WalkUPs display many of the technical metrics of a city, most have an unmistakable suburban flavor. "When you go to Tysons Corner and you don't mistake it for a real downtown, there are two reasons," says Nathan Norris, director of implementation for the planning firm Placemakers. "One is the nature of the blocks -- they're what we call super-suburban blocks," meaning they're many times larger than your average city block, which has a perimeter of around 1,800 feet. Why does that matter? "Because humans, we bore easily," says Norris. "If I have to walk too far without seeing something different, I'm going to be bored. A bit part of urbanity is not boring the humans."

Which leads to the second problem: transparency. Many city codes dictate that as much as 75 percent of buildings' ground floors must be non-tinted, non-mirrored windows. Parts of these suburban WalkUPs have that -- especially the mall-like sections -- but many do not, leaving long stretches of shrubbery-adorned blank walls facing the sidewalks (and the parking lots). "No windows has the effect of killing street life," says Norris. Creating an urban place is about more than simply adding mixed-use density and places to stroll.

They're also often exceedingly tidy, sometimes because they're controlled by a single developer who manages a private maintenance crew and sets rules about behavior. And WalkUPs that are built from scratch usually have few mom-and-pop stores, thanks to high rents and contracts offered to tenants promising no competition.

For all of these reasons, many of these far-flung suburban WalkUPs resemble a suburban version of a city. You can see the identity crisis at work: The WalkUP in Reston "is ringed by parking garages," says Malouff. "There are buses that go there, but they're not used very widely. People drive to get there." Even the suburban skyscrapers Malouff blogged about have flummoxed the car-oriented community. The 23-story Reston high-rise is being built about a 10-minute walk from the Metro station -- leaving locals worried about the daily traffic jams that will ensue when everyone drives there.

The disconnect is cultural, as well. Every iconic urban establishment shipped to the suburbs only seems to highlight how un-citylike these environments really are. The aforementioned Washington Post article mentions the trendy D.C. establishments that are being exported: U Street's CakeLove to Silver Spring, the lefty bookstore/cafe Busboys & Poets to Hyattsville. Nothing wrong with expansion, except that it's often a one-way street -- WalkUPs incorporating "urban cool" as a marketing tool, rather than fostering their own personalities. Will Tysons Corner cultivate the type of scrappy entrepreneurialism and creativity that produces a Busboys & Poets? Or will it just be ... walkable?

Maybe it's unreasonable to expect so much of these places. (Maybe I'm just offended that the study gives Columbia Heights, my old D.C. neighborhood, the same "silver" ranking as dreary Ballston, Va.) Densifying the suburbs is a good thing, and WalkUPs never claimed to be just like the real city -- only to mimic some of its physical attributes. And Leinberger makes it clear in his study that he's merely tracking the market trends, not advocating a specific type of urbanism. "Chris is looking at it as a developer," says Dunham-Jones, "not as an urban planner."

But if WalkUPs promise an urban experience, it's fair to ask what kind of urban experience they're offering. "Any definition of urban you can think of, these places would qualify," says Malouff. "But there's clearly a difference." So without getting into the elusive, irritating question of "urban authenticity," perhaps it is time to broaden the definition of cities to recognize those differences. It's been broadened before, most recently in 1991 by Joel Garreau with his book "Edge City," which recognized the spread of urbanism beyond central city borders, and the trends he detailed have only become more pronounced since. "Increasingly, metros are starting to look polycentric," says Dunham-Jones.

The line between city and suburb might be blurring. There are skyscrapers rising in Reston and Wal-Marts going up in D.C. But it's less an urban spirit than a lifestyle destination.