Where are the brave athletes?

Ayanbadejo and Kluwe stand out as players taking a stand, and hearken back to sports stars who stood for something 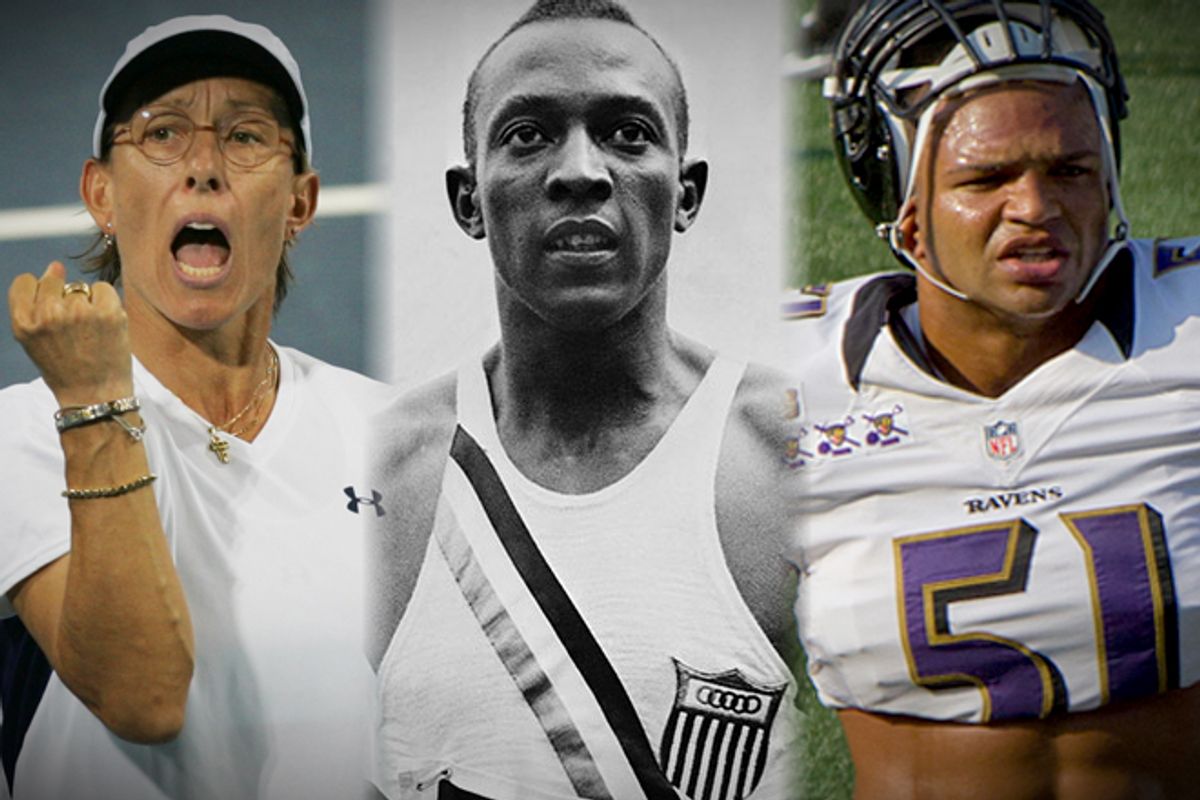 Pardon me, but did professional football players suddenly take a giant leap into maturity?

In an event so remarkable that most of the sports press still doesn’t seem to know what to make of it, Baltimore Ravens linebacker Brendon Ayanbadejo spoke out a few weeks ago in support of a Maryland ballot initiative that would legalize gay marriage. To quickly recap what happened next: Maryland State delegate Emmett C. Burns Jr. wrote to Ravens owner Steve Bisciotti requesting “that you take the necessary action, as a National Football League Owner, to inhibit such expressions” and that Ayanbadejo “be ordered to cease and desist such injurious actions." Minnesota Vikings punter Chris Kluwe responded to Burns in a scathing open letter that quickly went viral: “I find it inconceivable that you are an elected official of Maryland’s state government. Your vitriolic hatred and bigotry make me ashamed and disgusted to think that you are in any way responsible for shaping policy at any level.”

Ayanbadejo’s stand would have been notable coming from any professional athlete. But in this case, coming from a player at the most macho position --linebacker -- on pro football’s most macho team -- the Ravens -- in America’s most macho sport, it was positively courageous. And not only did it not elicit a negative reaction from other NFL players, but one of them, Kluwe, stood up with Ayanbadejo.

Every week, some professional athlete is lauded in the press for having courage and for showing “grace under pressure,” as Hemingway coined the phrase for Joe DiMaggio. This is almost always in connection with taking a bone-jarring hit and getting back in the game, taking a baseball in the ribs at 90 mph and shaking it off, or getting up off the canvas after a fierce left hook.

Scarcely, though, do we see examples of real courage in sports, such as an athlete daring to take the right stand on an issue that might be unpopular with the writers who control his or her image in the media, the fans who pay his or her salary and buy the products he or she endorses, or the owners who can make life very difficult for him or her, even if the owners can’t openly prohibit their right to free speech as Burns seems to think they can.

But the real legends in American sports are usually those athletes who stand for something besides personal achievement. When I was young, I would get goosebumps when my father described for me what it was like to be sitting in a movie theater full of white people cheering as they watched newsreels of Jessie Owens demolishing Hitler’s Aryan race myth in the 1936 Olympics.

For two weeks during the London games this summer, I listened to commentators talking about the “courage” displayed by Jessica Ennis or Michael Phelps. While I enjoyed Phelps' and Ennis' performances and appreciated what they achieved, I couldn’t help but think that what they had done was admirable but not necessarily courageous.

Winning in a stadium filled with 60,000 people who have told that you were of an inferior race, that takes courage.

I was equally thrilled by my father’s story of standing at the bar in Jack Dempsey’s restaurant on Broadway in 1938 for the rematch of Joe Louis and Max Schmeling. He spoke of how a hush fell over the crowd when Louis stepped into the ring and of the euphoria when, two minutes into the fight, Louis KO’ed Schmeling. A former heavyweight champion, Schmeling was Hitler’s hero (though we did not know at the time that Schmeling despised Hitler). But what Joe Louis showed that night -- carrying the burden of his race and his country into the ring against a man who had knocked him unconscious two years before – was courage.

I grew up expecting more from my sports heroes than a good performance. Jackie Robinson, who carried the burden of every black ballplayer, and Roberto Clemente, who took it on himself to represent latino ballplayers of all ages, were among my big favorites. The reason was simple: They stood for something larger than themselves. It was easy for me to get behind Cassius Clay/Muhammad Ali. In fact, while I had just been an admirer of Clay, I really didn’t get behind him until he became Muhammad Ali. I couldn’t pretend to understand the Black Muslims or why Ali had sworn his allegiance to them, but I could understand someone who stood up to the U.S. government and risked his livelihood to oppose the war in Vietnam.

The most intriguing athletes of the late 1960s and early 1970s were Bill Russell in basketball, Jim Brown in football and Curt Flood in baseball -- men who spoke against injustices in their sport and took their lumps from the press and the public for exercising their right to free speech.

Flood was the first athlete in any team sport to risk his career defending the principle that players had a right to be free agents and choose the teams they wanted to play for instead of, as he put it, "being a high-priced piece of property.” He lost his case in the Supreme Court by one vote, as well as a couple of years of his career. His fight was eventually won, but not until Flood had been retired for more than four years. How many baseball players -- or players in any sport, for that matter -- even think of Curt Flood when they sign their multi-million dollar contracts?

Martina Navratilova stands out as the only major star in any professional sport to come out while still in their prime. In 1981, after winning her first Australian Open and her second of nine Wimbledons, she told the world about her sexuality. In fact, endorsements be damned, she did it relatively early in her career and never backed down. In 1992, she filed a lawsuit against a Colorado amendment which denied gays and lesbians protection from discrimination, and in 2000, she was honored by the Human Rights campaign, the country’s largest gay-lesbian lobbying group, with their National Equality Award.

What, I wonder, has happened since then to make professional athletes so complacent? Have all the battles been won? Are there no more principles worth defending?

Black athletes such as Michael Jordan and Tiger Woods were socially significant only from a marketing perspective. They walked right through the doors opened for them by by others and never acknowledged that barriers had ever existed – or still existed. Jordan, once the most famous and richest athlete in the world, used his fame and influence to waltz right into an all-white country club in my hometown of Birmingham, Alabama, without bothering to mention that other blacks without his power were still kept out.

During this year's Summer Olympics, I thrilled for the exploits of Carmelita Jeter, Serena Williams and Gabby Douglas. But wouldn’t it have been satisfying if one of them -- if any of our medal winners -- had spoke up for John Carlos and Tommie Smith, two gold medal–winning sprinters in the 1968 Olympics who were expelled from the Olympic village and barred for life because they raised their fists in a black power salute at their medal ceremony? Do any of our athletes have an opinion about the 44-year-old injustice to Smith and Carlos? Do they even know about it?

There’s an issue out there now that could use some high-level attention from high-profile athletes, and Brendon Ayanbadejo and Chris Kluwe have taken the lead. It may prove to be the toughest cause that any professional athlete will ever take up because the misunderstanding, hatred and prejudice lined up against it are so powerful.

Only a handful of NFL players have ever admitted to being gay, and there’s little doubt that the backlash for anyone who stands up with Ayanbadejo and Kluwe is going to be nasty and that some players will be risking endorsements and card show money if they speak out. They will, however, have the satisfaction of knowing that they did the right thing and that they are aspiring to heroism – real heroism.

In turn, can we, the fans, show our solidarity with them? Well, if you’re going to buy a football jerseys this season, let me suggest a Ravens’ shirt with “Ayanbadejo” on the back or a Vikings jersey with “Kluwe.” Many fans will know why you’re wearing them, and the ones who don’t need to be told.