A great color printer you can afford

Looking for a color inkjet printer that’s reasonably priced and fast and cheap to use? Look no further 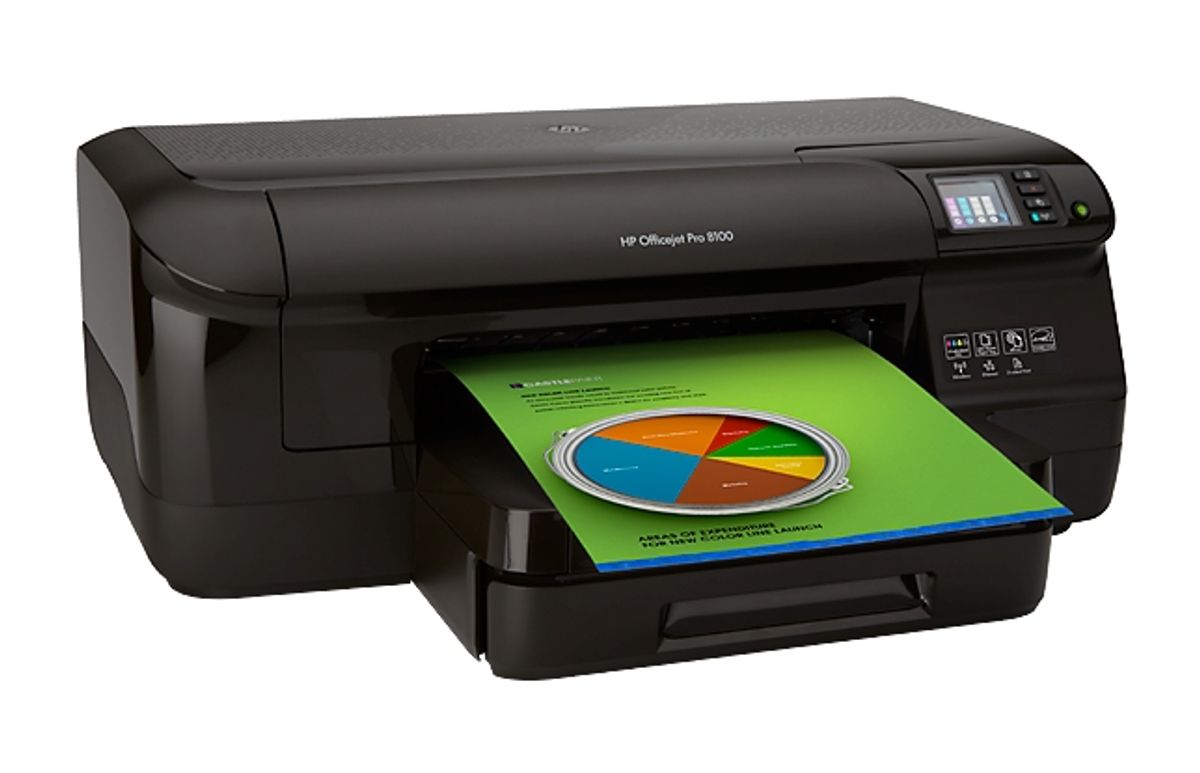 If you don’t care about printing photos but still need a color printer, the HP OfficeJet Pro 8100 ePrinter is a good choice. For as little as $107, you’ll get a color inkjet printer with a lower per-page cost and faster print speed than many other color laser printers.

While searching for a great color inkjet printer, my goal was to figure out which brand and technology offered the most value for people looking to print a report for school, a PowerPoint presentation for work, or some colored letterhead. These are all jobs that can be done using a color photo printer without entailing the higher costs of a photo printer, color laser printer or color LED printer (although I gave all technologies a fair shake in my 11-hour search). I also figured out that cheapo printers end up costing you a lot more in ink fairly quickly.

As it turns out, I was able to track down a reasonably priced inkjet printer that offers a lower per-page cost than many other color laser printers and has a print speed that leaves just about every color inkjet printer out there eating its dust: the HP OfficeJet Pro 8100 ePrinter.

Priced as low as $107 on Amazon, the Pro 8100 is an inkjet printer designed for use in a medium-sized office environment, but it's compact enough to use in a dorm room or your home office. Replacement ink cartridges for the Pro 8100 can be purchased in a value pack for as little as $50-$70 pop. From that, you’ll get a page yield of 700 color pages. At their most expensive, the cartridges still manage a per-page cost of roughly 2.6 cents for every black-and-white page you print and 2.9 cents for a color page. That’s well below the average 20-cents-per-page cost that you’ll get when using most photo-quality inkjet printers to print a color page. It beats the average 6-cents-per-page color printing cost of many mono laser/LED printers, too.

In addition to printing as inexpensively as many laser printers, it’s just as fast as one, too. According to Hewlett Packard, the Pro 8100 can print laser-quality black-and-white pages at a rate of 20 pages per minute. Color? 16 pages per minute. At those speeds, you’ll get black-and-white pages printed at a resolution of 1200 x 600 dpi, and color at 1200 x 1200. What does this mean? Not much. Manufacturers all have different ways of measuring the number of dots per square-inch that their printers are capable of producing. All you need to know is that everything you print is going to look sharp as hell. Oh, and if you're a Linux user, according to one Amazon shopper, the Pro 8100 will work with your hardware without having to hunt the backwaters of the Internet to track down any drivers.

In addition to being crazy cheap and crazy fast, the Pro 8100 has a 250-sheet input tray, features USB 2.0/wired ethernet and Wi-Fi connectivity, a full color LED display and auto duplexing. Thanks to HP's ePrint technology, you can even send jobs to the Pro 8100 via email from any Web-connected computer, tablet or smartphone.

When Consumer Reports (subscription required) reviewed it, they pitted the Pro 8100 against 25 other color inkjet and color laser printers.  It was given a 65 out of 100 — only five points below their highest-ranked single-function inkjet printer and color laser printer, both of which cost $50 and $100 more, respectively. I'd love to be able to provide you with some more editorial reviews, but I wasn't able to find any.

Of course, the 8100 has a few drawbacks. Macworld, which is owned by the same company as PC World, published Jacobi and Riofrio's review, too, but added a warning for Apple computer owners that they'd do well to let OS X install the printer's drivers for them, as HP's Mac installation software was faulty. Just about everyone who reviewed it said that it wasn’t the greatest device for printing pictures; the Pro 8100 tends to produce over-saturated images. But like I said at the top of this piece, I’m not talking about a photo printer here. This is a piece of gear designed for occasional color printing. If you’re in the market for a photo printer, we’ll have a fresh recommendation for one ready to go in the near future.

I mentioned earlier that I looked at a lot of printers from a lot of different companies before deciding on the HP Pro 8100. There are alternatives to what HP's cooked up here, but they can't provide the same amount of value as my pick.

Dell doesn't make a single-purpose color printer other than its $200 1250c Color LED Laser-Class Printer, which although occasionally on sale, typically costs close to $100 more than the HP 8100. Canon's PIXMA iP4920 is priced similarly to the 8100, but it's marketed as a photo printer, and its per page printing cost is significantly higher: 4.7 cents per black-and-white page and an eye-watering 13 cents per page for full-color pages. Epson doesn't do cheap printers. Its lowest priced mono-function inkjet printer is the $200 WorkForce WF-7010, and it only comes equipped with USB 2.0 or Ethernet connectivity.

Samsung? They're only making hardcore office hardware. One of Samsung's CLP-315 color laser printers sells for $430, so it's not a contender here. The same goes for Brother. Their HL-3045CN is the lowest-priced color printer they offer, and it costs close to $150 more than the HP 8100. Kodak? They've had a reputation for producing some of the cheapest inkjet cartridges for a number of years now, but they're bleeding money. They haven't thrown in the towel yet, but man, it's got to be close. (I'll be sticking with hardware made by companies with survival plans that don't include winning patent lawsuits.)

HP has other options than the 8100. The 8100's the least expensive mono-function color inkjet printer they make, but for $100 more, you could step up to the OfficeJet Pro 8600 e-All-in-One Printer. For $200 more, you'll get a modestly sized color printer, scanner/copier with the same connectivity options as the HP 8100. But if you were after a multifunction printer, you'd be looking at our recommendation for a multifunction printer, right? Moving on.

There are a lot of low-priced inkjet printers out there, as well. It might be tempting to buy one and save $50 or $60. But their per-page printing cost is high enough to negate the savings you get from buying one. That's about the same number of color prints as many color inkjet replacement cartridges can provide. Take the HP 1000–J110A. It's the cheapest well-reviewed inkjet printer I could find that was reviewed by people that actually own the hardware. It costs a mere $24 at Walmart – that's less than a night at the movies! But its per-page printing cost can't match the HP 8100. Look: A high-capacity black ink cartridge for this thing costs $28 and yields about 440 pages. A replacement color cartridge costs $30 and will give you 330 pages. That means that you'll get a per-page cost of 6 cents per page for black-and-white printing and 9 cents per page for color printing. While we're only talking cents per page, the HP 1000–J110A's printing costs are steep.

Basically, once you're past your third ream of paper, you've spent more on the junk printer than you would have on our pick. Three reams!

So, if you’re looking for a color inkjet printer that’s reasonably priced and fast and cheap to use, forgo cheap printers, forget about high-priced color laser or LED printers, and pick up the HP OfficeJet Pro 8100 ePrinter. For most people, it's the way to go.