"The Scientists": A family curse 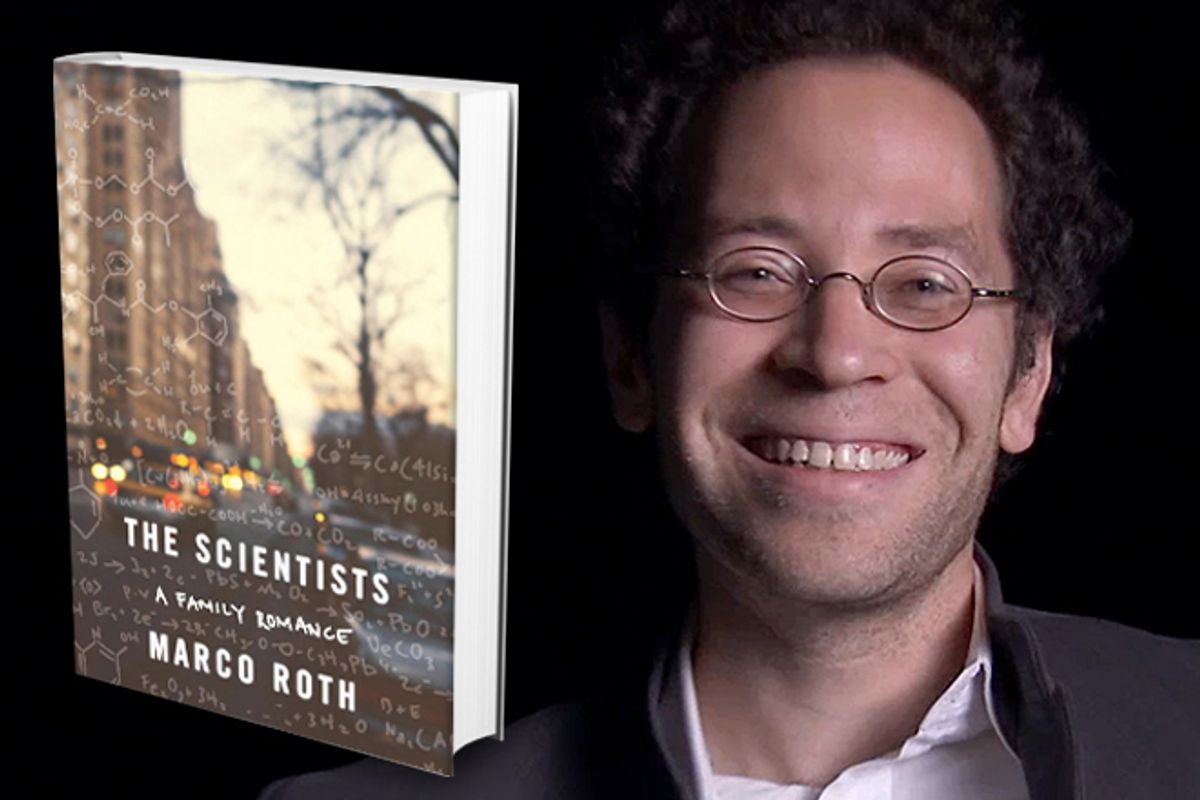 There are readers who, due to demographically-rooted prejudice, will dismiss certain kinds of autobiographical writing out of hand. Here's why "The Scientists," Marco Roth's memoir of growing up in 1980s Manhattan might meet with their disapproval: Roth came from a wealthy family whose fortune originated in the Philips Van Heusen shirt company -- although his father repudiated the class he was raised in as a pack of "phonies, vulgarians and frauds." He spent his childhood in a spacious apartment on the Upper West Side -- although his parents bought the place in 1969, when the neighborhood was what we now call "transitional." He was brought up never to worry about money -- although his father imperiously threatened to disinherit him if he went to Oberlin rather than Columbia University. Finally, Roth devoted much of his early adulthood to studying esoteric poststructuralist theory at assorted high-end colleges -- although he characterizes this as largely an effort to avoid thinking about the central problems of his life.

Most of those problems surrounded his father's long, slow death from AIDS. At the age of 14, Roth's parents explained that his father, a physician who supervised a sickle-cell-anemia clinic, had contracted HIV via an accidental needle stick at work. Marco, just starting high school, was admonished to keep his father's illness a strict secret. His father died during Roth's junior year of college, while their relationship was still clouded by their quarrel over Oberlin. The son was haunted for years afterwards by what he felt to be the "thwartedness that clung to my parents' lives," and the persistent sense that his own life had also been stunted or failed in some maddeningly undefinable manner.

"The Scientists" describes Roth's circuitous investigation of this shortfall, and it is in the telling that this autobiography defies every uninformed summary judgement likely to be leveled against it. It is an exquisitely written and intensely interior book, one that eschews the contemporary memoir's penchant for epiphanies, redemption and tidy resolutions. This ranks as quite an accomplishment, given that Roth's family story involves secrets, lies and sex -- catnip for the most egregious specimens of the form. "The Scientists," in fact, began as a sort of countermemoir, a response to a book that Roth's aunt, the noted novelist Anne Roiphe, wrote about her childhood with his father in the posh yet emotionally arid enclave of Park Avenue. In that book, Roiphe suggested that her brother might have been exposed to HIV not by accident and while engaged in the noble and rational enterprise of science, but rather "in the more usual way." Roth thought she had little justification for the insinuation and vowed to write a better, truer book about the man.

Well, that didn't work out quite the way Roth planned it, a development in perfect accord with how he depicts his life generally. He portrays himself as the sort of guy whose love goes unrequited, whose intellectual projects peter out, whose dreams get derailed. He relocates to Paris "to learn how to live, which was why people like me went to Paris," and ends up as the sidekick in a friend's epic romance, a not unfamiliar role. An inkling of the nature of the "curse" that afflicts him can be glimpsed when he scolds his aunt for not writing "something more like Henry James, like 'The Beast in the Jungle,'" a novella about a man who squanders his opportunity for ordinary happiness because he's holding out for a more momentous destiny. "The Scientists" itself has a Jamesian propensity for choosing to orbit complex feelings rather than risk the flattening, simplifying effect of nailing them down. (Although Roth's prose, I should add, is not especially like James').

But perhaps the most extraordinary thing about this memoir is how free it is of self-importance, particularly when you consider that Roth is a co-founder of the literary journal n+1, something of an epicenter for that vice. Although sincerity and authenticity were surely virtues regarded with skepticism in the graduate schools where Roth whiled away his 20s, they are also qualities "The Scientists" possesses in spades. It refuses even to lord Roth's present-day understanding over his clueless past self -- that is, to indulge in the egotism of autobiographical irony. "I was lost then, and I'm probably still lost," he seems to be saying, "but this is the story of how I fumbled, and am fumbling, a bit closer to the truth."

Much of "The Scientists" is about reading: Turgenev, Mann, Goncharov. Besides science, Roth's father founded his identity in the superiority of his taste in literature and music -- always and only the well-established, traditional classics; even the young Marco's liking for baseball was regarded as failure or betrayal. Trying to get to the bottom of the dead man's character, Roth spent years poring over the books his father has pushed on him, searching for clues to what he might have responded in that "canon of disappointment." An indirect route, perhaps, but Roth learned indirection from his earliest years as the only child in his family's "museumlike" home. In an environment where nobody acknowledges certain crucial realities, even to themselves, the only way to track those realities is obliquely.

"Nothing changes right away, at least not dramatically," Roth writes toward the end of "The Scientists" and after a critical conversation with his mother. Half against his will, he comes to a conventional insight and then goes a little beyond it, to a less comfortable one. "The Scientists" closes with a scene of him still at sea, starting all over again, beginning to write what you suddenly realize is the book you're holding in your hands. He hasn't quite arrived, but it's good know that at last he can see the shore.