It's just a movie!

After the recent violence in the Middle East, it's time to reevaluate our understanding of free speech 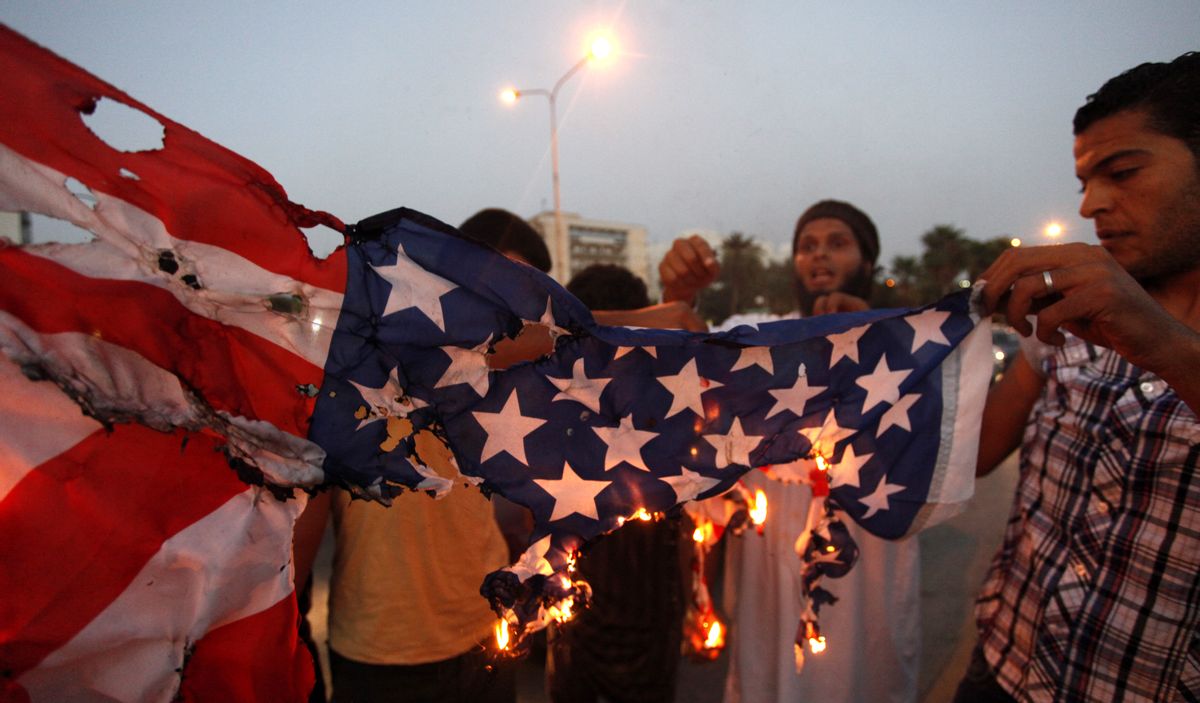 Libyan followers of Ansar al-Shariah Brigades burn the U.S. flag during a protest in front of the Tibesti Hotel, in Benghazi, Libya (AP/ Mohammad Hannon)
--

On Saturday, Ghulam Ahmad Bilour, Pakistan’s railways minister, held a press conference and declared that he would pay $100,000 of his own money to anyone who could capture the maker of a now-infamous YouTube movie trailer that depicts the Prophet Muhammad killing innocent men and juggling underage girls in his desert tent. The clip has careened around the Internet, inspiring violent protests and attacks in some Muslim-majority countries and cities. But it has also inspired bewilderment in the West—how could a trailer so farcically bad be construed by millions of Muslims as representative of the feelings of the majority of Americans toward Islam? Don’t they understand that the video doesn’t speak for the U.S. government? Can’t they lighten up? Don’t they understand freedom of speech?

The short answer is, no, not in the same way that we in the West do.

North American democracy is built upon the ideas of Enlightenment Europe; the sanctity of secularism in government and the free flow of ideas, whether we agree with them or not, is what defines our particular brand. But Western republics can’t expect to see reflections of themselves when they stare, Narcissus-like, into the roiling pool of Middle Eastern governments, still in the infancy of their democracies—at least not yet.

To the West, democracy has strange bedfellows in today’s Middle East, coming in the form of the Muslim Brotherhood and other Islamist parties elected to office democratically but who don’t represent the liberal values we associate with our own system of rule. The reality in many places throughout the Muslim world is that free speech ends where religion begins. For reasons of both history and culture, Muslim-majority nations aren’t as willing to see the humor in such subversive speech, especially that which is directed squarely at the Prophet Muhammad.

That’s because in these countries, people live their lives by the words of the Prophet. The Koran is believed to be not just a retelling of important stories by eyewitnesses, as Christians understand the Bible; it is the unmitigated word of God put to the page by the chosen hand of Muhammad—quite literally a work of holy stenography. The hadiths, sayings and teachings from the life of the Prophet, provide another crucial daily guide. Speech is a serious thing in these places because it is how one comes to know God—he wrote down his rules, and his prophet recorded his own best advice; if you try to live by these teachings, then you’re on a good path. The written word is itself considered a high art form; calligraphy is a common theme in Islamic art, where depictions of people are considered graven images—one of the reasons the Danish cartoons of Muhammad from 2005 and 2006 caused such a stir.

Even everyday speech related to religion is treated differently—in newspapers and books published in Muslim countries, mentions of the Prophet Muhammad are followed by the acronym “PBUH” (peace be upon him). Subtle manifestations of religiosity come through ordinary speech. Inshallah, “God willing,” is inserted after most declarations of action, to indicate that all things, ultimately, are in the hands of the almighty. Mashallah, “as God wills,” signifies sincere admiration for a thing and can be used after anything from telling a mother what a beautiful child she has to complimenting someone on a new hairdo. Both terms are used ubiquitously.

It is from the mind-set of reverence for God through the written and spoken word that Muslims around the world saw the offending YouTube clip of recent fame. The disconnect was profound. The Prophet Muhammad venerated so routinely in daily life is portrayed in the clumsy tan equivalent of blackface, acting like the villain from a Chaplain film. The man through which God spoke was being made a fool, and so, transitively, the Muslim way of life was being sneered at.

I lived in the Persian Gulf country of Qatar for two years, working at an American university where our students—bright and well-spoken, often from wealthy families who had afforded them the opportunity to travel the world, and many of whom had attended American, British, and French schools since childhood—struggled to have open classroom discussions about religious teachings and the existence of God, even in a university setting where we had been promised by the government that there would be no interference with classroom instruction or university life. All the same, lines were drawn in the sand, and sometimes, students who crossed these lines were ostracized. One, who vocalized his atheist beliefs during classroom debate, was made the object of ridicule by his more orthodox contemporaries for months.

Not being a democracy, Qatar doesn’t have laws protecting free speech, and every expatriate (in a country whose population is 75 percent expatriate) heard horror stories about someone saying the wrong thing to the wrong person and being deported. So imagine my surprise when, a few days ago, I saw pictures of protesters carrying signs and walking en masse in a demonstration against the controversial YouTube video through the typically orderly streets of Doha, Qatar’s capital. A peaceful protest—the foundation upon which free speech rests—against the exercise of free speech itself.

In Qatar and throughout the Muslim world, free speech still applies only to the dirty human things of this world, the problems of our own making, namely politics and politicians. God is off limits, above criticism. Certain lines cannot be crossed or else society will fall in on itself—if only from a practical point of view, government cannot scrub the Almighty from the public sphere because most of civic society is organized around religion. But perhaps more significantly, if we can step back, these protests, like the one in Qatar, are a shoot of liberalism springing out of the mulch of autocracy, proof positive of the trickle-down effect of the Arab Spring. Without having seen images of fired-up Egyptians in Tahrir Square, it’s unlikely that the protesters would have even considered a march as a course of action for their anger.

We in the West wonder why the Muslim democracies aren’t catching on to our own attitudes toward the dissemination of information and speech. They did the yeoman’s work of overthrowing tyrants, so why can’t they take the next step on the people-power path? It’s easy to forget that it’s not just access to a website or Twitter that makes for an understanding and appreciation of free speech. It’s a mind-set that develops over the time, one that must be taught and protected—we’d probably be shocked at what counted for free speech in the U.S. back in the 19th century. Free speech—true and unadulterated speech—may just be the third rail of Middle Eastern democracies at this moment in time. Will it ever be as robust a concept as it is in the West? Perhaps not, but Socrates, in the court of the legendary Athenian republic, was sentenced to drink from the hemlock cup for religious sedition. The course of democracy never did run smooth.