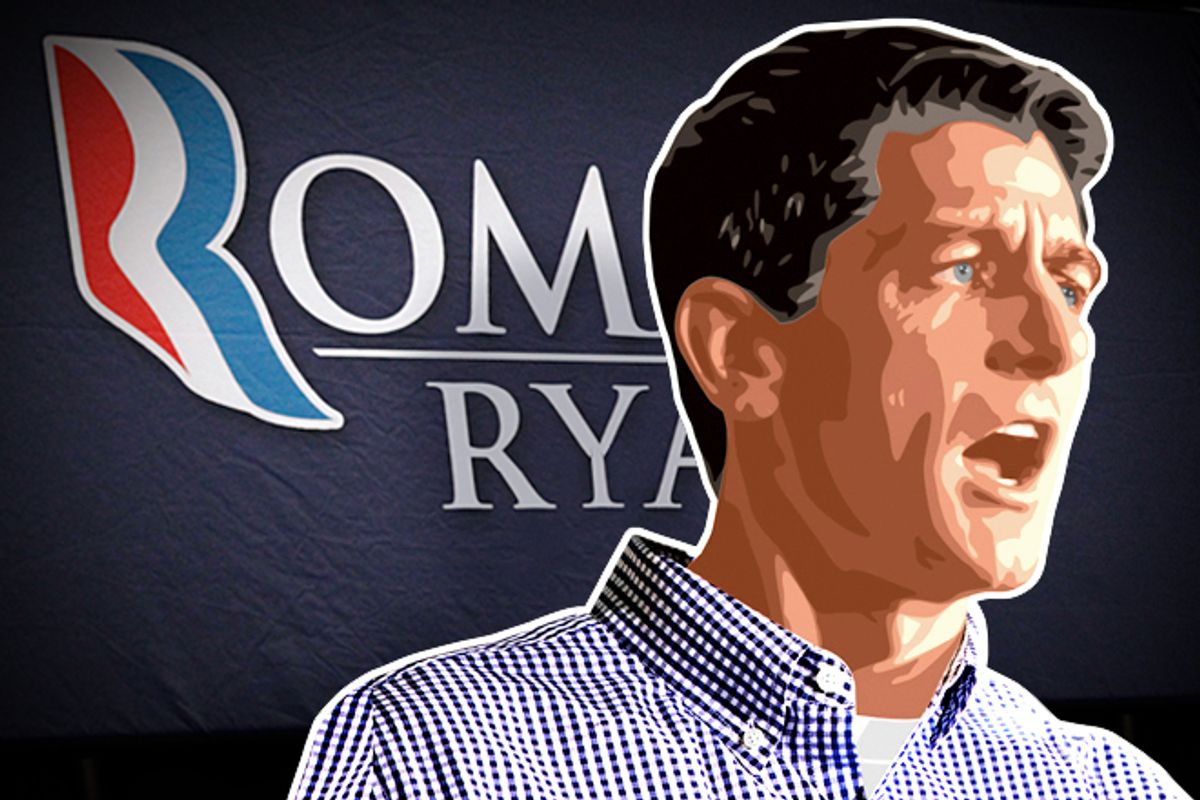 Paul Ryan may not be quite ready to go rogue, but his supporters wish Mitt Romney would give him permission to at least be himself – the hard-right ideologue the Tea Party folks love. They hoped the Ryan pick would signal Romney's turn right for the fall, and it did, but then it didn't, as Romney spins like a weathervane. Certainly, though, the Romney team changed Ryan's tune on Medicare, and he hasn't talked up his old dreams of privatizing Social Security or gutting the welfare state entirely.

As Romney drops in the polls, those hard right folks are calling on him to let Ryan be Ryan – to liberate the V.P. pick to be free to be as conservative as he wants to be.

“I was enthused when Mitt Romney picked Paul Ryan because I thought it was a signal that this guy was getting serious, he was getting bold,” Wisconsin Gov. Scott Walker told a Milwaukee radio host Friday. "I just haven’t seen that kind of passion I know that Paul has transferred over to our nominee, and I think it’s a little bit of some pushback from some of the folks in the national campaign.”

“If someone says you’re going to change Medicare as we know it, you say, ‘You’re damned right,'" the Club for Growth president Chris Chocola told the New York Times. "Paul Ryan can give that answer. The Romney ticket would be well served to let Paul Ryan be Paul Ryan.”

Really? Does the Romney team honestly think it's a good thing that Ryan got booed by seniors when he spoke to the powerful AARP last week? Maybe some of them see it as comparable to Romney himself being booed by the NAACP for deriding "Obamacare," but it's not. Romney has written off black voters and may even have welcomed the boos as a signal to his right-wing white base that he'll stand up to "those people." But the GOP can't write off seniors – white seniors are too crucial to their base.

A new Reuters/Ipsos poll shows that during the two weeks since the Democratic National Convention, Romney's support among voters 60 and over has collapsed, from a 20 point lead to less than 4 points. His double-digit lead over Obama on the issues of healthcare and Medicare is gone. Reuters credits or blames Ryan for at least some of that decline.

Of course Romney didn't help his own case by denouncing the 47 percent of Americans who pay no federal income taxes as people who "won't take responsibility and care for their lives." Almost a quarter of that group are seniors, most of them white.

Ryan has mostly been a good soldier, agreeing to play down his plan to scrap Medicare for a voucher system. He even did a (perhaps temporary) about-face on cutting the same $716 billion out of the system that Obama did. He did slip and call his boss "obviously inarticulate" for his remarks about the 47 percent made at a Boca Raton fundraiser. Ryan no doubt perceives himself as far more articulate on that issue, when he divides the electorate into "makers" and "takers."

A "Congressional official with ties to the Ryan camp" told the New York Times the V.P. nominee already "has a Plan B: Return to Congress, use his positions on both the Budget and the Ways and Means Committees to seize a prominent role in a sweeping overhaul of the tax code, and use that as a springboard back into presidential politics on his own record."

But that will be hard: No losing V.P. nominee has ever won the presidency except for the exceptional FDR. (There's also no guarantee Ryan will win back his congressional seat, since his lead over Rob Zerban is slipping, too.) Ryan's political capital will also drop if the Romney-Ryan ticket loses Ryan's home state of Wisconsin, which is looking increasingly likely. The far right may see Ryan as its version of FDR, the man who will finally scrap the New Deal, but the older white voters they need to mount an anti-New Deal coalition aren't likely to want any part of it.

I'll be on "Hardball" at 5 ET to discuss Ryan's troubles.

I'll also be at the Commonwealth Club in San Francisco tonight at 6 PT to discuss my book. I hope to see some of you there.