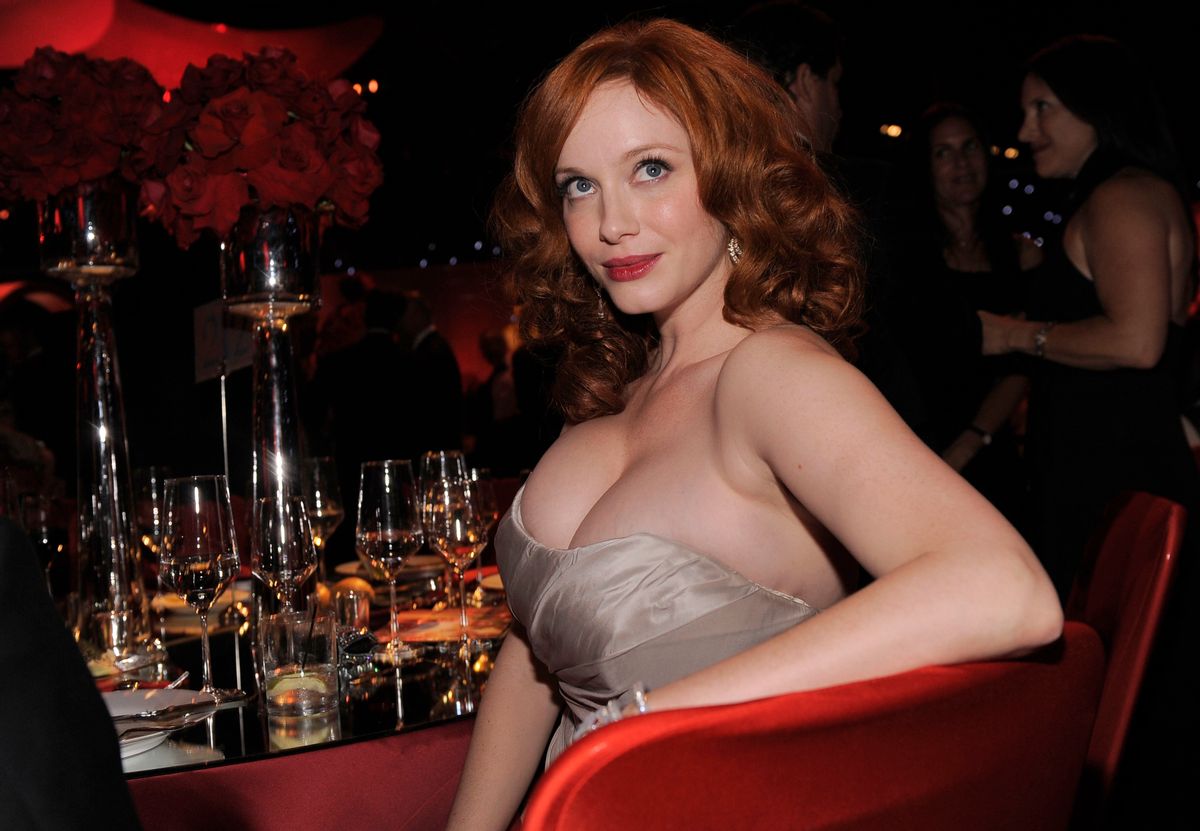 There was a distinct trend in women's fashion on the red carpet at the Emmy Awards Sunday night, and it was not pixie cuts or gowns with trains. It was cleavage. Not your average demure decolletage, either. Some of the night's most famous attendees had their breasts fully out on front street. Obviously there's the factor of breast objectification, but this was not entirely about that. The amount of cleavage on display was not just a sexual statement but some kind of dare, an act of confrontational femininity that challenged viewers to reevaluate any preconceived notions they might have about large breasts and their impropriety. As a chesty woman who has often been on the receiving end of sneers simply for wearing tank tops in the summer (can I live?), let me just say: thank you, ladies of television, for putting it out there.

Christina Hendricks, goddess of curves, led the pack: the full-figured "Mad Men" beauty has been instrumental in challenging the impossibly thin beauty standard that has reigned for at least a few decades. And while her hourglass figure is constantly objectified (and has made an excellent plot point on her show), Hendricks is never reserved about wearing low necklines—and it's hard not to think about her goth past and not imbue her dress choices with a sense of determined agency. That for every dis from the Fashion Police, she clocks another strapless dress into her wardrobe to floss her cleavage as defiantly as two middle fingers up. It might sound absurd, particularly for an award-winning actress, but for every Esquire piece talking about how she is the most beautiful woman in America, there's another piece shaming her for her cleavage. In 2010, three years after she became famous for her role as Joan on "Mad Men," she told a Daily Record reporter that "no designer in town will loan me a dress" because she is a size 14. This time around, Hendricks wore a design by Christian Siriano, the "Project Runway" winner made good, and she didn't seem shy at all about its neckline. On the red carpet, she was poised as ever, being who she wants to be.

It's a little different for Sofia Vergara, the Colombian star of "Modern Family," because while her curves are celebrated, they're also often tied to her Latin background. The way the Emmy writers played the comedic siren's presence was typical of the "spicy" tropes that get tossed on any woman with Latin American roots. (The mocking of her accent on a pre-shot skit with the "Modern Family" cast was particularly egregious.) So maybe she gets more of a pass from the critical masses since there's a subconscious expectation of Latinas to be more sexualized. The same went for Morena Baccarin ("Homeland"), the Brazilian-American whose architectural neckline called to mind J Lo at her most showstopping, and garnered just as much post-show "hubba hubba" hullabaloo. But Vergara also wore a revealing gown with self-confident impunity—and even better, when she had a wardrobe malfunction, she tweeted about it before anyone could dominate the conversation. She seems to feel good enough about her body not to react with humiliation; when her zipper split and revealed her rear, she tweeted a photo and said, "Yes!!!! This happend 20 min before we won!!!! Jajajajja. I luv my life!!!!" (Even more amazing than her easygoing attitude about the open zipper: she wasn't wearing Spanx!)

One difficulty for the naturally large-breasted is the double standard; even in an asexual tank top, they are looked upon as more sexual than women with smaller chests, both objectified and shamed for their genetics (which, by the way, they have no control over). This reaction involves a mixed-up cocktail of evolutionary biology and Victorian standards, complicated by weird media expectations. Ever hear the rumor that Anna Wintour doesn't like breasts? Ever seen a runway model? Messages operate at two extremes, telling large-breasted women they're the most desirable women ever because of their mammary glands, and also that they're wrong and gross freaks who will never, ever be able to fit into designer clothing.

That's why the ballsy, breast-proud exposure of the likes of Hendricks and Vergara feels like non-conformity, rather than over-sexualization. They're representing for those of us stuck in the middle, who have been made to feel like we have something to hide, or that we're only our chests. They're representing for those of us who got sent to the principle's office in seventh grade just for wearing a tank top, or who were doused with water in eighth grade for making the mistake of wearing a white T-shirt.

Maybe it sounds ridiculous, taking a concept so simple and banal as dressing for an awards show in 1-percenter Hollywood, and turning it into a righteous reclamation of body politic. But it does a lot for those of us who've struggled with this our whole lives. And when anyone in the public eye wears their chests with confidence—whether it's Kat Dennings, Zooey Deschanel, Tina Fey, or Padma Lakshmi, all of whom let their necklines go free—it's a welcome bit of encouragement. Don't call it a comeback. We've been here for years.