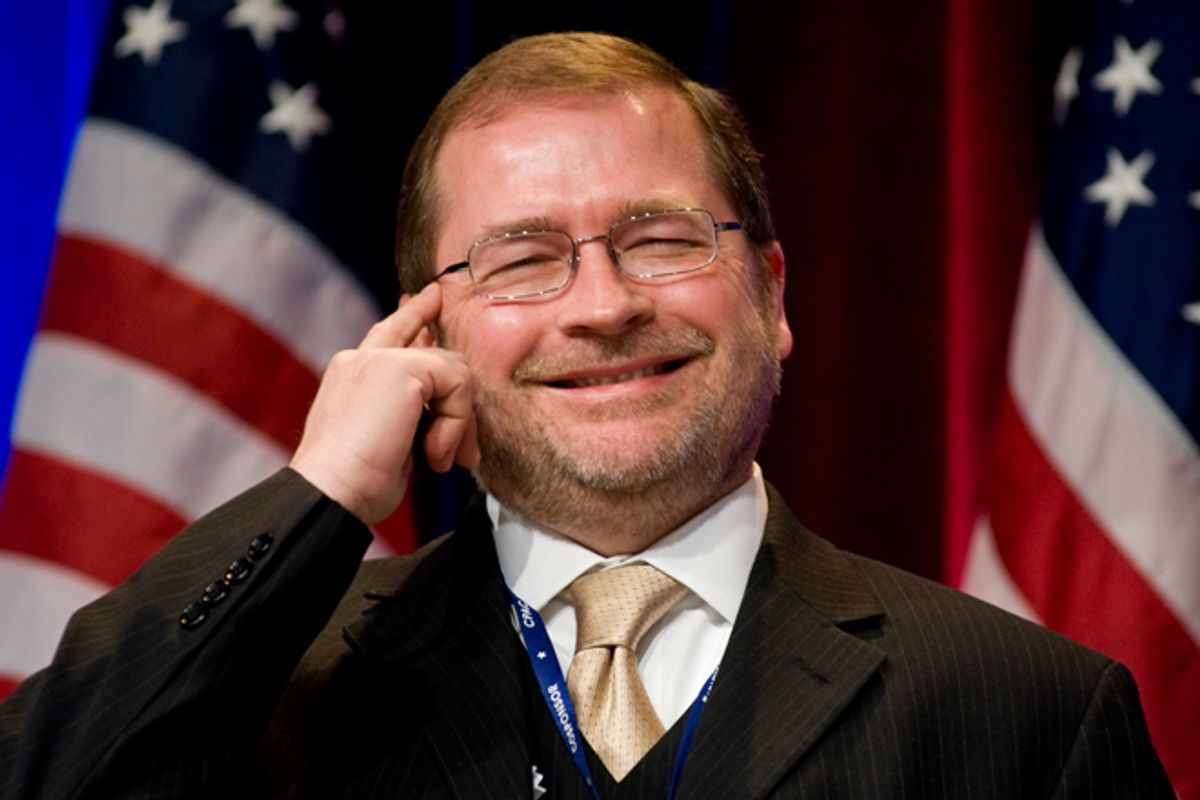 Exhibit A in how the fading fortunes of Mitt Romney are befuddling Republicans: Grover Norquist is losing it.

Norquist has a new opinion piece in Politico, and the problems begin with the headline: "W.H. talks wind energy but won’t support it."

Norquist's headline falls into a special category of click-bait -- it's so obviously untrue that you are forced to read the piece, just to figure out how something so ridiculous could have been published. Obama supports extending the production tax credit that is crucial to nurturing the wind energy industry. Romney opposes it. You could argue that government shouldn't be picking winners and losers, but you can't argue that Obama isn't supporting wind energy. Go ask an Iowa voter, where wind energy is responsible for thousands of jobs -- they know who backs wind energy and who doesn't.

Ah, but Norquist is wily. Here's the nut of his argument:

...[I]n another example of the schizophrenic nature of this administration’s energy policies, at the same time that it is promoting wind energy, the Obama White House and its environmentalist allies are seeking to scuttle the development of a crucial component in wind turbines: copper.

Obama, argues Norquist, is trying to stop Pebble Mine, a massive open pit mining project in Alaska. The mine is believed to be capable of producing 2-6.5 billion tons of copper, gold and molybdenum ore. Wind turbines use a lot of copper. Q.E.D: Obama is not supporting wind power.

Of course, just about all forms of electrical generation and transmission use a lot of copper. So one could just as easily argue that Obama is not supporting coal-fired electricity or natural-gas-fired electricity, or heck, Duracell "copper-top" batteries. Obama opposes the industrial revolution! Back to your caves, everyone!

Or, conversely, you could argue that Obama is trying to support the ecological integrity of one of the largest salmon fisheries in the world.

The word "salmon" is never mentioned in Norquist's column. But it's a crucial part of the story. The proposed Pebble Mine is located in the watershed that feeds Bristol Bay, home to half the world's sockeye salmon. In May, the EPA released a draft report, "An Assessment of the Potential Mining Impacts on Salmon Ecosystems of Bristol Bay, Alaska." The gist: A mining project of the size and scope of Pebble Mine poses serious threats to the sustainability of the salmon fishery.

Can we have our sockeye salmon and wind power too, without Pebble Mine? That's a great question, one that invites discussion of the tradeoffs that are inherent to every balancing act between industrial development and environmental protection. In a perfect world, our legislators and regulators would be seeking to ensure that mining projects adequately conformed to the strictures of laws like the Clean Water Act and Clean Air Act so that we could extract and exploit resources without wiping out fisheries.

But that's not the kind of debate that Norquist is interested in. He's created an entirely specious thesis -- that Obama isn't supporting wind energy because the EPA is taking a hard look at the environmental impact of a massive mining project that could possibly affect the marginal price of one component of a wind turbine.

Meanwhile, the candidate Norquist supports, Mitt Romney, backs a policy change that would stifle wind industry's growth altogether. If this is the kind of argument that a leading ideological light of the Republican Party is willing to make, is there any reason to trust that party to be responsible when balancing the livelihoods of salmon (and the salmon fishing industry) against copper miners?