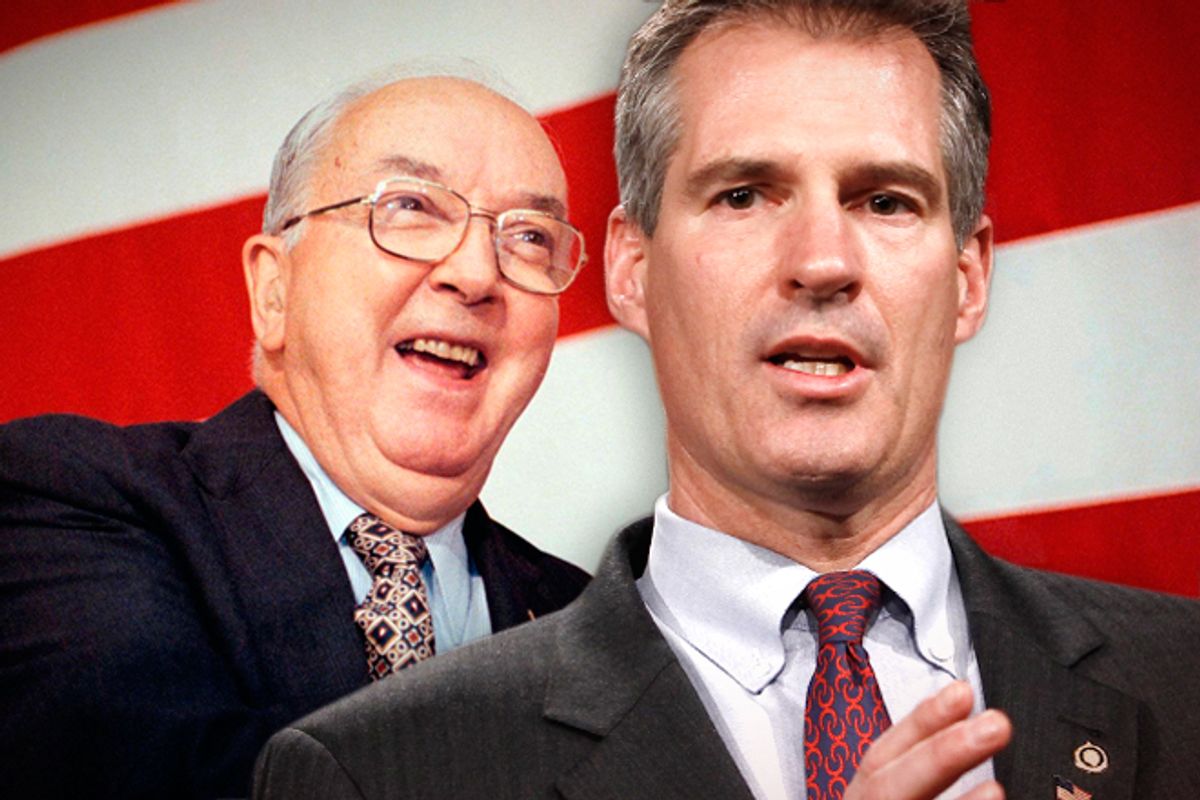 Those frat-boy conservatives are at it again. Today Sen. Scott Brown's staff had a good time doing the tomahawk chop and war-whooping during an Elizabeth Warren rally in Boston, to mock her claims to Native American ancestry. Asked about it by reporters, Brown wouldn't apologize for his boyos:

"The apologies that need to be made and the offensiveness here is the fact that professor Warren took advantage of a claim, to be somebody -- a Native American -- and using that for an advantage, a tactical advantage."

Clearly Brown is sticking to his Jesse Helms strategy, updated for the 21st century.

North Carolina Sen. Jesse Helms was infamous for his racism, but even he had to tone it down and code it for the modern era. In 1990, running against North Carolina Gov. Harvey Gantt, an African-American, Helms ran the infamous "white hands" ad, written by Romney advisor Alex Castellanos. It opened with a white man's hands crumpling a job-rejection letter, and the voice-over went like this:

"You needed that job, and you were the best qualified, but they had to give it to a minority, because of a racial quota. Is that really fair? Harvey Gantt says it is. Gantt supports Ted Kennedy's racial quota law that makes the color of your skin more important than your qualifications. Your vote on this issue next Tuesday. For racial quotas, Harvey Gantt. Against racial quotas, Jesse Helms."

Of course, there was no "racial quota law" making "the color of your skin more important than your qualifications." But the "white hands" ad reached out to every white male voter who blamed his problems in a changing economy on affirmative action, and Helms defeated Gantt that November.

In last week's debate, Brown channeled Helms when he attacked Warren. "Professor Warren claimed that she was a Native American, a person of color, and as you can see, she’s not,” he said. “When she applied to Penn and Harvard, she checked the box claiming she was a Native American. Clearly she’s not. That being said, I don’t know, and neither do the viewers know whether she got ahead as a result of checking that box.”

There are so many things wrong with Brown's take on Warren's heritage it's hard to know where to start. For one thing, "as you can see" isn't the way we classify people racially. Given our nation's history of racial mixing, it's a dangerous and insensitive place to go. It showed Brown up as cosseted in his own white world, unaware of the complexities of diversity – that people can wind up looking like one ethnicity when they are actually from another.

Most important, it showed Brown is willing to play on the anxieties of white men that women and minorities are using affirmative action to take jobs they should have. He came right out and said we don't know "whether she got ahead as a result of checking that box." It was astonishing. Watching the debate at the time, I tweeted, "I cannot believe Scott Brown talked about Warren's racial background so stridently. It's like the old 'white hands' ad."

I'm not denying there are reasonable questions about Warren's racial heritage and how she has identified herself over the years. Earlier in the campaign, she took too long to answer some of those questions. But her story that she was told she had Native American heritage by her family – in fact, that her parents had to elope because her father's family disdained her mother's family's Cherokee and Delaware background -- and that she never questioned it, has the ring of truth to those of us who've grown up on complicated family stories about ethnicity and secrets.  In a Boston Globe story this weekend, some of Warren's cousins corroborated her story, saying they too were told of ancestors who hid their Native American ancestry, while others said they'd never heard that (Warren's siblings backed her up right away).

For Scott Brown to decide he's going to be the arbiter of Warren's complicated racial heritage is the height of white male privilege and arrogance.

The suggestion that this accomplished lawyer and consumer advocate only "got ahead" because of affirmative action comes straight from the Jesse Helms playbook. And the derisive high jinks of Brown's staffers are of a piece with other outbreaks of frat-boy conservatism during the campaign, going back to the Romney team sending campaign supporters to heckle Obama adviser David Axelrod during a press conference, sending its bus to circle and disrupt an Obama event, honking its horn, and the Daily Caller lunkhead Neil Munro heckling President Obama in the Rose Garden.

But mocking someone's racial heritage reaches a new low. The war-whooping tomahawk-choppers weren't just random campaign volunteers; they included Brown’s deputy chief of staff Greg Casey, his constituent service counsel Jack Richard, and GOP operative Brad Garrett. Down in recent polls, the desperate Scott Brown won't apologize, but Elizabeth Warren is out with a classy ad fighting back. In it she says "Scott Brown can continue to attack my family, but I'm going to continue fighting for yours." My bet is Massachusetts voters are going to be more sympathetic to Warren's approach than Brown's nasty race-baiting. It's not Jesse Helms' North Carolina in 1990; in fact, North Carolina, which voted for Obama in 2008 and where Obama now leads, is no longer Jesse Helms' North Carolina.

I'll be on MSNBC's "The Ed Show" at 8 ET tonight talking about Scott Brown's new low.