Smoke in the cabin? Just open the window

After Ann Romney's plane made an emergency landing, the pilot explains to Mitt the mysteries of pressurization 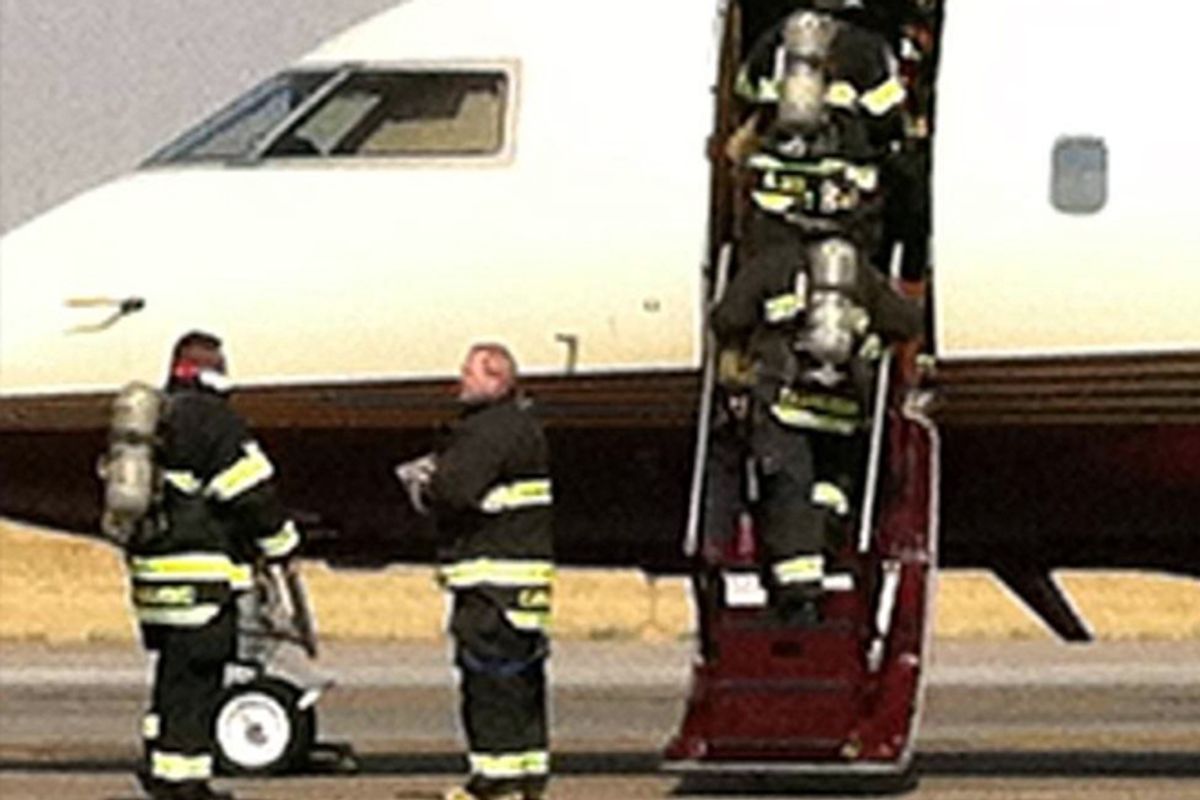 Firemen enter the plane carrying Ann Romney after the plane made an emergency landing in Denver on Friday. (AP/Romney for President)
--

Last Friday, the plane carrying Ann Romney, the wife of presidential hopeful Mitt Romney, made an emergency landing in Denver after an apparent electrical malfunction caused smoke to fill the cabin.

Afterward, Romney said the following to the Los Angeles Times:

“I appreciate the fact that she is on the ground, safe and sound. And I don’t think she knows just how worried some of us were,” Romney said. “When you have a fire in an aircraft, there’s no place to go, exactly, there’s no -- and you can’t find any oxygen from outside the aircraft to get in the aircraft, because the windows don’t open. I don’t know why they don’t do that. It’s a real problem. So it’s very dangerous. And she was choking and rubbing her eyes. Fortunately, there was enough oxygen for the pilot and copilot to make a safe landing in Denver. But she’s safe and sound.”

The remarks have touched off a storm of snarky commentary from those in the blogosphere who have a slightly better grasp of things aeronautical. Should I join the chorus?

Considering how much time he has surely spent airborne thus far in his lifetime, presumably Mr. Romney would have at least a vague understanding of where the oxygen in a plane's cabin comes from, and why the windows don't open. Indeed, when you look more closely at what he said, he may well have been joking. Even if he hadn't been kidding around, mocking him is a little unsportsmanlike. Sources tell me that Romney is a white-knuckle flier, and pressurization is one of those things that few folks understand.

Instead, here’s a primer:

As most of you understand, the air at high altitudes is thin and oxygen levels are very low. Using air drawn from the compressors in the engines, and regulated through valves in the fuselage, pressurization effectively squeezes this rarefied, high-altitude air back together, re-creating the dense, oxygen-rich conditions at sea level. (Or close to it. Pressurizing all the way to sea level is unnecessary and would put undue stress on the airframe, so the atmosphere in a jet is actually kept at the equivalent of 5,000-8,000 feet, meaning that you're breathing as you would in Denver or Mexico City -- minus the pollution.)

Something about the word "pressurization" causes people to picture the upper altitudes as a kind of barometric hell. I've been asked, "If the plane wasn't pressurized, would my eyes pop out?" Cruising in an airplane is not the same as dropping to the Marianas Trench in a deep-sea diving bell. The cabin is pressurized not to keep your eyes in, but to allow you to able breathe normally.

Really, that's all there is to it.

Great, you’re thinking. But what about a loss of pressurization, the plastic masks dropping, people screaming …

Yes, a cabin decompression is potentially dangerous. During cruise, depending on the altitude, there’s a differential of somewhere between five and eight pounds per square inch between the pressure inside the plane (high) and the pressure outside (lower). You can think of the fuselage as a sort of balloon, with up to eight pounds of force pushing against every inch of the fuselage. Introduce a hole or leak into the picture, and you've got a problem. Loss of pressure means loss of oxygen, and if this happens explosively, such as from a bomb, the resultant forces can damage or outright destroy the plane.

However, the vast majority of decompressions are not the explosive kind, and they are fairly easy for a crew to handle. Odd things have happened, such as the bizarre Helios Airways accident in 2005, but crashes or fatalities from pressure problems are extremely uncommon, even with a fairly rapid decompression brought on by a hole or puncture.

If cabin pressure falls below a certain threshold, the supplemental masks will deploy from the ceiling, exposing everybody to the so-called rubber jungle. This is the point where people begin shrieking and scribbling farewell notes to their loved ones. Instead, put on your mask and try to relax. The plane will be at a safe altitude shortly. There are several minutes of backup oxygen for everybody.

Up front, the pilots will don their own masks (we have a separate oxygen supply), and begin a rapid descent to an altitude no higher than 10,000 feet. If the descent feels perilously fast, this isn't because the plane is crashing, it’s because the crew is doing what it’s supposed to do. It might be jarring, but a high-speed emergency descent is well within the capabilities of any aircraft and not unsafe by itself.

(Should a pressure loss occur over mountains, pilots will follow predetermined routes, sometimes referred to as “escape routes,” that allow for a more gradual descent, in stages. Even if crossing the Andes or the Himalayas, there is, by regulation, always the opportunity to reach a safe breathing altitude before supplemental oxygen is used up.)

So, Mr. Romney, this is why the windows in an airplane don't conveniently roll down like those in your Mustang. Introducing a suddenly opened window into a pressurized cabin would be somewhere between extremely inconvenient and downright dangerous -- though it’s not liable to bring on the Hollywood-style scene you’re imagining, with people being torpedoed through the opening head-first. It’d be noisy as hell, but chances are you wouldn’t be sucked away, and the plane is not going to crash.

From what we know, the situation aboard Mrs. Romney’s regional jet involved smoke from an electrical problem, and using supplemental oxygen in such a scenario can make a bad situation worse. Supplemental systems mix fresh oxygen with ambient cabin air, which would recirculate some of the smoke. And, the last thing you want in the presence of an on-board fire is an extra-rich oxygen environment. So, in most smoke or fire scenarios, the cabin masks won’t be deployed.

For the crew, the task instead is to isolate the source of the smoke or fire and deal with it directly, and/or to ventilate the cabin via the pressurization outflow valves or other plumbing. How this is done varies from aircraft to aircraft, situation to situation. We have checklists to guide us, and they can be quite long and involved.

Without more details, I can’t say for certain what happened to Mrs. Romney’s plane, or how serious the situation was or was not. I can tell you for sure, though, that the windows stay closed for a good reason. As the Romneys may or may not find out, this is true even on Air Force One.