With my first kid, I needed to do everything myself. Then I discovered the power and freedom of hiring someone else 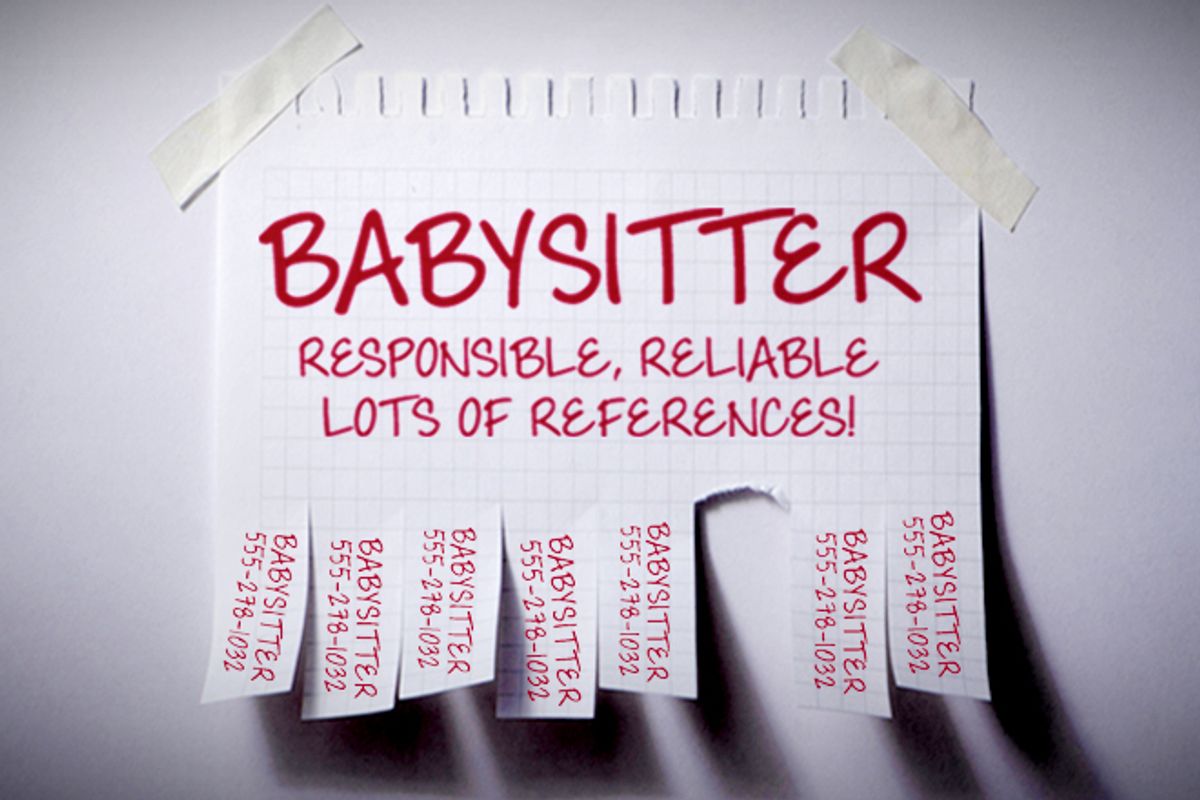 I have already cuddled my 3-year-old daughter through a tantrum. I battled my son over homework. My husband is at a class that he attends twice a week. Tornado threats strangle the news, but my husband won’t be home until 10:30 p.m. (He’s in night school getting a degree in leadership; he’s also a New York City-based special education teacher and saving the world.) Downstairs, my baby sitter is making dinner for the kids and entertaining them. It is 5:30 p.m., probably past the time most parents hire a baby sitter unless they are going out for the night, which I am not.

But I am paying someone to watch my children so I can have the night off from the dinnertime power struggle. My best friend said, “I don’t understand. Why not get a sitter when the kids are asleep so you can go out for a drink? Blow off some steam.”

Oh, and I do that too. Hiring baby sitters while the kids are awake offers freedom from playing the role of miserable domestic goddess. I don’t want to fill the dishwasher yet another night. I don’t want to tidy up after their sweet little messes — all the Legos and Pokemon cards and miniature dogs and dolls. I am calm and not so frazzled because for $15 an hour — sometimes $7 an hour or $10 depending on which sitter I can secure — I pay someone to watch my children.

I have a wide variety of sitters. Daytime sitters. Nighttime sitters. A 20-year-old male college student. Ten-year-old mother’s helpers. Fifteen-year-olds and 18-year-olds. There are sitters who help with the laundry. There are sitters who pull out the arts and crafts. I have such an arsenal of baby sitters that when a friend steals someone from my crew away, I have no problem finding someone else. Call it shirking my responsibilities as a mother if you must, but I think there is no shame in hiring someone who is going to help you delegate, divide and conquer.

I wasn’t always like this. With my first child, I felt guilty about asking others for the smallest favors (e.g., I’m going to the doctor, would you mind watching him for 45 minutes?). I was more attached and worried about him at the time.

I divorced my first husband when my son was 18 months. There was some lingering fear that if I left him anyplace or with anyone too long, he’d somehow come home not only detached or resentful, but he’d also turn up with some disfiguring childhood disease like Coxsackie virus. I hired baby sitters, but only if I was in the house. Why? I worried about separation anxiety. I took business conference calls while he played (not always so silently) in the background. Once I abruptly hung up on an editor because my son, who had been climbing on top of a toy that wasn’t meant for climbing, knocked himself upside down and split his lip. When a sitter did come, I’d direct her every move, micromanaging her like a factory worker. It was a mess. And I was a mess trying to be the ever-perfect, all-encompassing mother.

This horrible push/pull of motherhood guilt while trying to find enough time for myself went on until my son was about 3. My friend and I had taken our children to ice-skate for the afternoon and my I’m-the-perfect-mommy-and-the-only-one-who-can-take-care-or-teach-my-child-anything had taken its toll. My son was giving me the He’s not that into you treatment and refused to let me teach him how to ice-skate. He plopped himself on the ice like a stubborn rock.

“Not going,” he said. His pants sagged in a puddle and his little cheeks burned red from the cold.

“Let me try,” my friend said and skated over to my child while I stood with my nose pressed against the Plexiglas of the rink. With one lesson in “Step, step, glide,” she had him ice-skating in all of three minutes.

“OK, how did you do that?” I asked her as I watched my kid clamber around the rink.

“Because he’s not my child,” she said.

And it was at that moment that I started seeing that while, yes, of course my influence and love was crucial, it wasn’t the only influence my son should be exposed to. Friends. Family. Baby sitters. I needed them all.

Yet, once my daughter was born a few years later, I fed back into that strange guilt even though writing assignments were piling up and I was in the last semester of working toward my MFA. Maybe there were too many sitters? Maybe I was supposed to be doing more — or, better, doing everything, as many of the bloggers and perfect parents on Facebook appeared to be doing.

“Where did you get this ‘I must do it all’ from?” my therapist finally said during a session one day about a year later.

Where did I get it from? Society. Uber-mom culture. Built-in guilt. I thought back to my grandmother Nana, who started her own travel agency at 40. She was so impassioned by travel that she worked up to four months before her death at 89. A typical night with Nana looked like this: her making beef barley stew for my demanding grandfather who planted himself at the table head with a dripping cigarette, yelling at her five grandchildren (including me) to sit down in our seats, stretching a 20-foot phone cord across hot plates of food and doling out dinner while talking to an unhappy client about how their hotel room in China wasn’t the suite they'd asked for.

“That’s ridiculous. No one likes to do it all,” my therapist said. “She was doing it all because no one else was helping. She didn’t enjoy it. You can’t tell me she enjoyed it.”

And though I didn’t witness Nana complain about the banal tasks of cooking, cleaning, parenting (or grandparenting, as you will) and working, I did remember her shuffling off to bed following dinner. Robe on. Kitchen closed. Nana was done. If you wanted to chat with her, you’d have to curl up in bed and watch old black-and-white movies or listen to her low, and sort of slurry, bedside voice via phone. She had no more in her — and while she was easily in her late 70s at the time, I couldn’t just blame her age. She was exhausted because of the never-ending tasks she was responsible for throughout the day. The woman never stopped. She never asked anyone for help — and my grandfather never offered. That was her generation. My grandfather was evolved enough to help her start her own business — but don’t dodge your domestic duties, Alice. No way.

It never occurred to me that she didn’t like it. Or, more, that she could have used a few mother’s helpers. And what an outrageous, yet modern concept that has carried over from the 1950s when women glamorously vacuumed the house in poodle skirts and heels. Why haven’t we shelved this concept and taken on a healthier one: You can love your kids up to the moon and back, but you don’t have to like all of the duties that surround parenting.

Not everyone can afford childcare all the time. And we certainly don’t have tons of expendable income. But I found that the faster I spent all of the money we did have on baby sitters (which my husband fully agrees is a great way to go broke), the quicker the martyrdom monologue disappeared. Sitters help me be a better mom. The less anxious, stressed — and stretched — I am, the more pleasant, calm, empathetic and helpful I am to my kids.

“I do too much” magically morphed into “I can’t do it all.” I can’t. And more, I choose not to. I need help. It's that simple. Fifty years ago women had access to a “village” of family members, neighbors, friends to help them raise children.

Feminist writer Jessica Valenti writes about this in her book “Why Have Kids?” She points out how strongly Americans feel that children should “be with their parents,” yet all the studies — including a huge one by the University of California  tracking more than 1,300 kids — show that kids do better when they’re surrounded and influenced by multiple people. Not just Mommy.

Valenti writes: “The days of ‘it takes a village’ are gone — because even if taking care of our children does require the help of other people, parents are likely to feel badly about it rather than seeing it as a natural part of raising a child as part of a community.”

I’m not suggesting that my neighborhood or family don’t pitch in to help — oh, they absolutely do. But being able to dictate when someone watches my child without banking on a favor is also a beautiful thing. My baby-sitting Rolodex is my village.