Robots are coming (for your job)

Get ready: Automation could wipe out whole categories of employment, and not even 1 percenters are safe 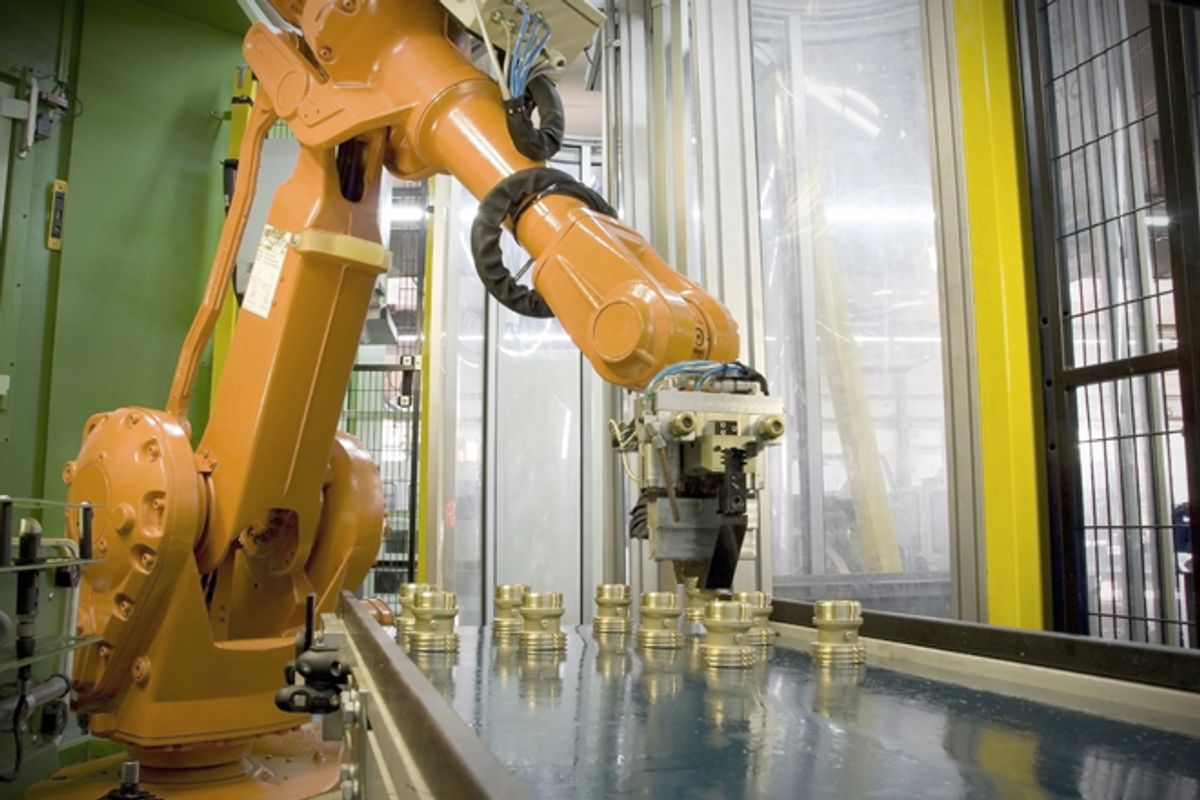 During this year’s political campaigns, politicians of both parties have neglected one increasingly important constituency of American workers.  I refer, of course, to robots.

The complaint “It’s the twenty-first century, so where are the robots?” is receiving an answer.  Robots are being used in advanced manufacturing. Support is building for allowing drones, developed in warfare, to be used for commercial purposes inside the U.S. Google’s robocars have logged more than 300,000 miles on American roads and Las Vegas has legalized self-driving vehicles. Robot vacuum cleaners chase dust bunnies across the floors of many homes.

Oh, and phones can now talk back.

Just when many people had resigned themselves to an age of innovation limited to social media, technology in its iconic science fiction incarnation, the robot, is on the verge of transforming the economy and society.  Few if any robots will take the form of silvery humanoids, and they are unlikely to revolt and try to exterminate their makers. But the effect of their evolution, if less dramatic than "Terminator" movies, could be profound.

Among other things, the rise of the robots may force a restructuring of the class system in the U.S. and similar advanced industrial countries.  From an earlier stage in technological society, we have inherited a five-tier class system, based on functions in the economy circa 1950, which itself replaced an earlier agrarian class system.

At the top of the class structure is a tiny number of capitalists and well-paid money managers, who invest their own or other people’s money in businesses or government debt.  Below the capitalists is a class of professionals, including many CEOs and other corporate executives as well as doctors, lawyers and professors, generally with graduate or professional degrees.  Beneath this layer is a lower middle class of white-collar managers and office workers, whose educations often end with a B.A.  They are frequently the front-line bosses of members of the working class, who nowadays are found chiefly in the nontraded domestic service sector jobs like retail and construction and repair and, increasingly, in healthcare.  Working-class education usually ends with high school, supplemented sometimes by vocational training or community college.  At the bottom of the 21st century American class system are found personal servants — nannies, maids, gardeners, janitors — who are disproportionately immigrants and are paid so badly that many full-time workers in this sector belong to “the working poor.”  Ironically, it is the working poor whose menial domestic jobs are least likely to be threatened by robot competition.  Everybody else has to worry about being displaced by increasingly sophisticated machines.

Working-class people whose jobs require general skills and versatility, like plumbers and other repair workers, are probably safe for the foreseeable future.  But a lot of working-class jobs are slated for annihilation by our new mechanical overlords.  In the coming age of self-driving vehicles, taxi, bus and truck drivers will be known only from e-histories.  Logistics jobs in general that involve moving items from warehouse to store to customer will be done by robots.  And even if manufacturing in the U.S. expands as a share of the economy, production jobs will shrink as a result of automation.

With these working-class jobs in transportation, distribution and sales will go many of the white-collar jobs of the people who manage working class Americans — the taxi dispatcher, the supermarket store manager.  An entire layer of lower-middle-class supervisory jobs, one step up from the working class in remuneration and gentility, will be decimated.

The healthcare sector will continue to expand, as a result of aging and gradually increasing affluence.  But a well-equipped bathroom medical station might be able to communicate with central hospital computers, eliminating the need for throngs of nurses who draw blood, measure pulses and fill out reams of insurance paperwork.  Nor will MDs necessarily be spared.  Diagnostic software will replace the expensive doctor who is paid to look up a patient’s symptoms online.  Robot surgeons may eventually be more accurate than tired or careless humans.

All of the learned professions are in for a shock.  In the 21st century United States, the elite professions of law, medicine and university teaching remain what they were in the colonial era and early modern Britain — self-policing guilds of mostly solo practitioners who can charge high fees because of their mastery of arcane knowledge.  Legal software and teaching programs will undermine the rents that lawyers and professors can extract from society, while the cost-lowering industrialization of higher education and medicine will replace independent individuals who are good at looking things up with computer-assisted teams.

Even those at the top of the class system, independently wealthy investors and the people who manage their money, will be challenged in the new robotic order.  Much stock market trading is already done at superhuman speeds by software -- hence the “flash crashes” of recent years.

The role of capitalists in industrial societies has been to determine which productive enterprises could do better for themselves and the community if they received an infusion of capital.  This essential task of allocating investment funds has been assigned to the private sector, in most cases, on the theory that people risking their own money or their own bonuses are likely to make better decisions than public sector bureaucrats who will not lose their jobs even if they throw money away on lemons.

But what if software programs eventually are better able to do the task of capitalists than the majority of fallible, partly-rational investors and money managers?  There would still be room for the creativity of the entrepreneur, who envisions a new company or a new industry and needs to raise money for it.   But we can imagine a time when the competing proposals of entrepreneurs might be evaluated more objectively by highly developed credit allocation software than by people.  In that case the tiny minority of rich investors and money managers might find themselves victims of technological progress like John Henry.  Software doesn’t need multimillion-dollar bonuses or multiple vacation houses and won’t be corrupted by kickbacks from companies that pay mutual fund managers to tout their stocks.  “Welcome to Skynet, your personal investment advisor …”

Among the robot-era rich, the big winners might be landlords and resource owners, whose income does not depend on doing things that computer programs might do better, but merely on ownership of particular parcels of property.  Mineral rights owners might be tomorrow’s answer to today’s hedge fund tycoons.  Of all forms of wealth, passive income from the ownership of property is the least justified in terms of personal merit or effort.  Look for anti-landlord campaigns like that of Henry George in the 19th century to make a comeback in the 21st.

Paradoxically, the jobs least likely to be affected by automation are those at the bottom of the contemporary American class structure:  childcare and elder care and domestic help and the less-skilled forms of medical care like that provided by home health aides.  Eventually, these too might be partly automated, but there is likely to be a permanent demand for human beings in these occupations.

Today conservatives, centrists and progressives tend to support policies that ensure that many of these jobs will be bad jobs with low pay.  These bipartisan policies include mass unskilled immigration, legal as well as illegal, and a low minimum wage supplemented by the earned income tax credit (an indirect subsidy to low-wage employers and the servant-hiring professional and investor classes).

With the right combination of wage and employment laws and social insurance reforms, many of today’s despised and poorly paid “servant jobs” could become the decently paid, respectable middle-class “service jobs” of tomorrow.  That had better happen, if America is to remain a middle-class society, because many other decent jobs are doomed to be wiped out in the coming robot invasion.