So many books, so little time 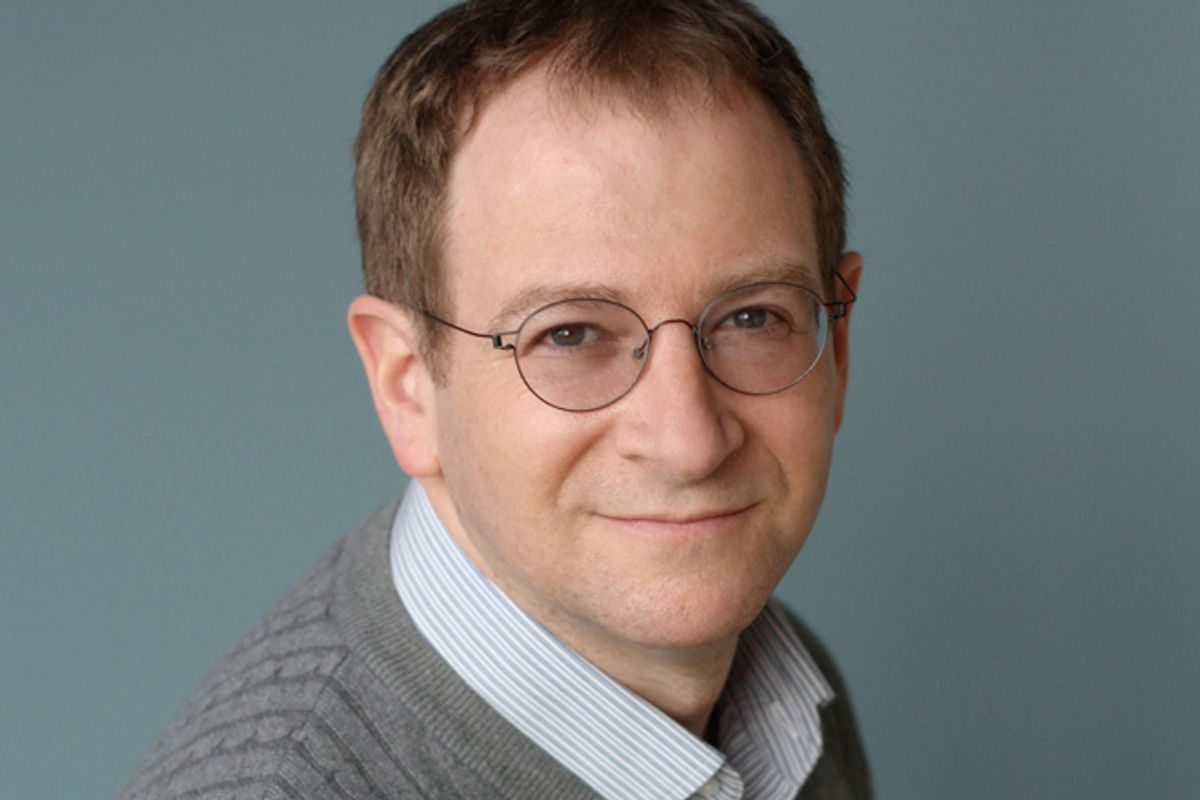 At some point, most avid readers experience a sobering realization: There's a limited number of books you can get to in the time you have left. For Will Schwalbe's mother, Mary Anne, a diagnosis of pancreatic cancer made this arithmetic even more stark. At 73, after a lifetime spent as a teacher, college-admissions administrator, refugee advocate, wife, mother and passionate reader, she learned that she had somewhere between two months and two years to live. As it turned out, she made it to the longer end of the spectrum, but — when not raising money to found a library in Afghanistan — she spent much of the time sitting in doctors' offices and waiting rooms, and receiving chemotherapy.

Will, a book editor and author, was one of the relatives and friends who accompanied Mary Anne during these sessions. Often, the conversation between mother and son would turn to what each one was reading. To make these discussions more interesting, they decided to read the same books, beginning with Wallace Stegner's "Crossing to Safety," a novel that let them address, obliquely, Will's worries about how his father would get by once his mother was gone. Will and Mary Anne's two-person experiment in communal reading is the focal point of Will's memoir, "The End of Your Life Book Club," a tribute to a remarkable woman and an exemplary reader. I met with Schwalbe recently to talk about it.

I was struck by the fact that in your family reading is often a group activity. At one point you describe you and your mom reading Colm Toibin's "Brooklyn" at the same time, literally sitting next to each other at the hospital.

On Saturdays when we were growing up in Cambridge, Mass., very often Mom and Dad would spend the afternoon reading together in the living room — different books, but at the same time. So you had two choices: You could sit quietly and read with them or go outside and get lost until dinner. It was a nice place to be. They were there, and enjoying themselves and you wanted to be there, too. My parents talked about books a lot. If you wanted to join the conversation, you could if you had a book to discuss.

Mom, as an educator, often had parents say to her, "I'm worried my kid isn't reading enough." She'd say, "Does your child ever see you read? Do you ever sit somewhere other than your bedroom and just read a book for a couple of hours?"

I can't help thinking that if I knew I had a very limited amount of time left, the pressure to pick the "right" books to spend that precious time on would be kind of unbearable.

Weirdly enough, we didn't have that problem. That's the thing I most want to convey with this book and the reason why I gave it that title. We're all in the End of Your Life Book Club. None of us knows how many more books we have left to read. The book I'm reading today, if I go out and get hit by the proverbial bus, that's the last book I ever read.

We really didn't feel that pressure, though. We read the way normal people do. We read what we'd heard about, what friends recommended to us, books we'd always wanted to read. When Mom saw a good review, she really wanted to read that book, which is how we stumbled on "The Big Machine" by Victor LaValle.

There were two exceptions to that. Mom did want to choose some books that she had read and loved and wanted to read again. They were "Gilead," by Marilynne Robinson, and T.S. Eliot's "Murder in the Cathedral." The same with some poetry. And one other thing: Her tolerance for what she called "silly books" completely evaporated.

I was curious about how she defined silly books, because her taste was so wide-ranging. She was very high on "Joseph and His Brothers," this incredibly long Thomas Mann novel, but she did not include, say, P.G. Wodehouse and "The Girl With the Dragon Tattoo," among "silly" books that were not worth her time. She loved them. And I love that her taste was so unself-consciously omnivorous. To me that makes her a truly unspoiled reader. She was not interested in impressing anyone, but she had a hungry mind. So can you tell me what, to her, constituted an unworthy book?

She thought that "Brat Farrar" — a Josephine Tey crime novel that I loved and urged on her — was silly. She didn't care about the people. She thought it was a gimmick. She didn't see any real purpose behind it.

I'm betting this stemmed from her extraordinary habit of always reading the ends of books first. She really didn't care about clever plot twists or the fever of finding out what happens next.

No, it wasn't about the twists for her. She felt that if a book had been written to set up a twist, that's not a very interesting reason for writing a book. She loved people. She wanted to meet interesting people in the books she read.

She loved the Stieg Larsson novel. She loved the character of Lisbeth Salander. (Who doesn't?) That was a person she was fascinated by. And she saw values there. She saw that Larsson wanted to make a real statement about violence against women.

She obviously didn't require what literary arbiters would call "beautiful prose." Larsson doesn't have that.

She did love beautiful writing. She loved Marilynne Robinson. My theory is that her priorities came from all the interactions she had with people for whom English was their second language. She spent so much time in refugee camps and traveling around the world. In those situations, story and what people have to say is the thing you focus on, not how they say it. When you work with refugees you meet amazing people who have extraordinary stories but trouble telling you about it because you don't speak the same language. Then you come back to New York and at a dinner party you may sit next to someone who speaks flawlessly beautiful, elegant English, but who has no values and nothing to say.

Yes. That doesn't mean that when someone brings it all together it's not the best of all possible worlds, but she had a different perspective on what matters most about a book.

Perhaps that was also because she wasn't a writer herself.

Yes. And had no desire to write, whatsoever.

That made her less preoccupied with the technical aspects. But I have to note that she loved "Gone With the Wind," and the values of that book are problematic to say the least!

That's just a book that if you encounter it at a certain age, you fall in love with reading, and that's what she remembered. I don't think she ever went back to reexamine its values.

So she didn't decide to reread that one?

No, but when I asked her to think back on her great reading loves, and to recall her earliest experiences of being completely enraptured by a book, it was "Gone With the Wind" and "Marjorie Morningstar," by Herman Wouk.

Were there any major differences between your two reading styles?

My mother was actually a more serious reader than I was or am. To the extent to which I'd attempt a book like "Joseph and His Brothers," my mind would be wandering. I'm counting the pages. It's not that I don't appreciate it, but it's a bit of a chore. It was work.

Were there idiosyncratic reading tastes you had in common?

We both loved the real estate of fiction and nonfiction. We liked to imagine living in fictional places, houses or apartments. That was something we both really liked about "The Elegance of the Hedgehog," by Muriel Barbery — the Parisian apartment building and especially the apartment of the Japanese character. It's a fascination that can be incredibly tangential, and it was a sort of game. It's almost like the way you'd read with a child, like when you're reading a picture book and you stop to say, "Who do you think lives in that house?" "Which of the three beds would you sleep on?" It's a sort of expansion.

It's an opening up of the world of the story so the reader can actually imagine stepping into it. I like that, too. What about the fact that she was a devout Christian — one of those rare, genuinely Christ-like Christians, I should add. Not the intolerant, overbearing kind.

She came from a great intellectual, compassionate tradition of Christianity. She loved her conversations with God. She loved going to church, the sermons, the music, the fellowship — where you greet everyone around you. And she loved reading about Christianity and religion in books. She loved "People of the Book" by Geraldine Brooks. That would be a case where she and I took away very different things. I read that more as a thriller or mystery and she was very interested in the religion. She thought, what could be more important to write about? "Gilead," of the books we read, was really her favorite.

That sounds like a potential for strain, if she wanted you to think about religion and you didn't want to.

Not since I was a kid and she made me go to Sunday school did she in any way, shape or form pressure me. She was really sincere when she said that it had given her such joy and comfort and she wanted the same for me. And since she had extremely liberal social values, there wasn't any kind of culture clash.

As wonderful it is when you discover that someone you're close to loves the same book or books that you do, I often feel quite sad when they don't. It makes me feel the distance between us more, and that gives me a kind of pang. It's one reason why I am very hesitant sometimes to act on a close friend's reading recommendations.

My mom wasn't fazed when she learned that you hadn't loved a book the way she did or didn't like it the same way. Her attitude was that you hadn't seen the thing in it that she had. It was as if you'd gone to the same restaurant, but you left talking about the decor while she talked about the food.

Did you have a favorite of the books you read together?

"Crossing to Safety." It got us started, and it was a book I'd never read and always intended to. It has all the reasons I love reading a novel, and it's everything a novel should be.