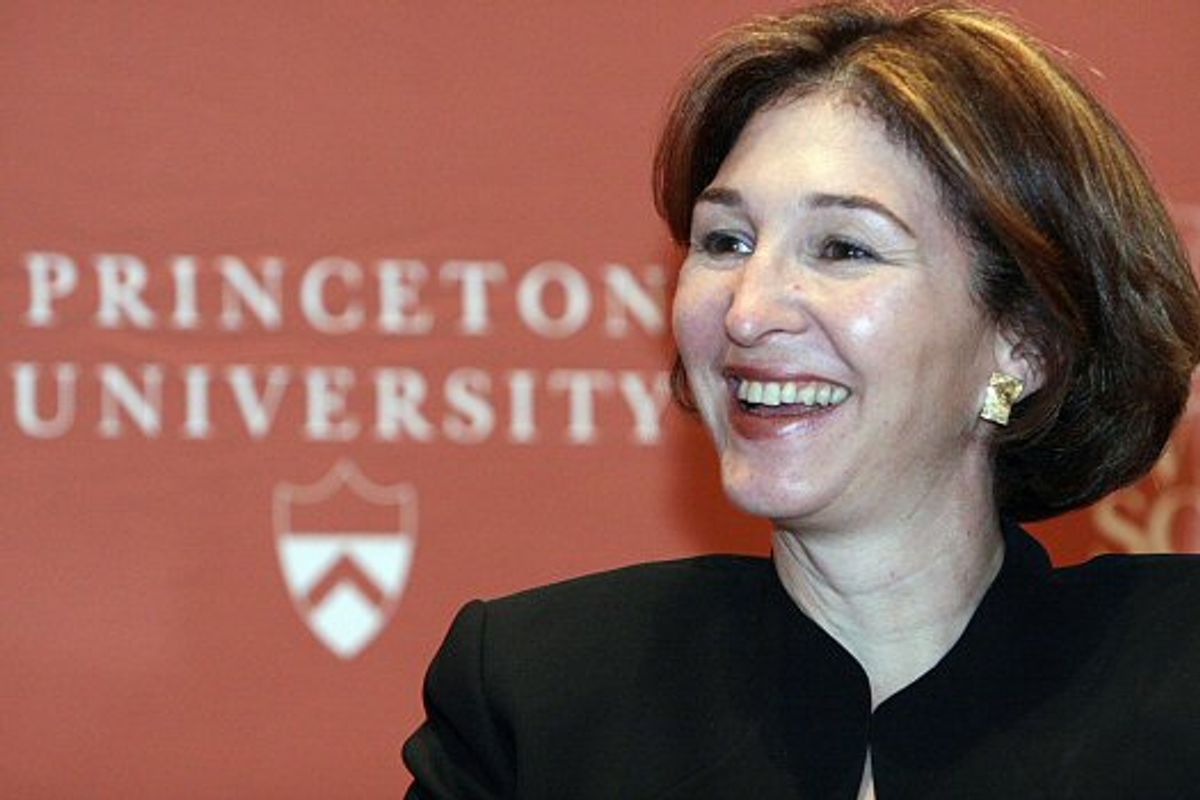 Anne Marie Slaughter is, of course, the author of that now famous (or infamous, depending whom you talk to) article  “Why Women Still Can’t Have It All” published in the Atlantic a few months ago to great hullabaloo.

If you’re a follower of online feminism, you’re most likely familiar with the conversation around the article. It dominated conversations both online and off for weeks, sparking debate and dialogue about a number of issues including work-life balance, maternity and paternity leave, privilege in feminism, and the direction of our movement for equality. If you need a refresher, you can read a roundup of responses to the article here.

This weekend I attended the Women in Enterprise Symposium, where I was privileged to hear Slaughter address an intimate crowd on a number of issues related to her article. Hearing her speak about the article and its fallout, I was struck by how bright, passionate, committed, and down to earth she came off. It occurred to me that while online spaces are crucially important to raising consciousness and sharing ideas, nothing can quite take the place of face-to-face interactions. It reminded me that behind this much-talked-about article that had made such a big splash and become almost bigger than the sum of its parts in the Internet consciousness, there was one woman who was thoughtful and committed and trying. It humanized her for me.

Opening the interview by laughing about how “distressing” it felt for her to have worked 20 years in foreign policy and find that google results for her name show she is known almost exclusively for writing about work – family balance, she went on to delve right into one of the most contentious and provocative parts of the article: its title. Slaughter:

“I went back and forth with the Atlantic about the title. I originally wanted ‘Why Women Can’t Have it All Yet’ but there was some push back on that.”

She also elaborated on what the nebulous ‘having it all’ means to her:

“Having it all means having the same work and family choices that men do. It doesn’t mean having everything you want -- no one has that. But I wanted to say that this is really hard and here’s what has to change so we can change that. I did not realize that ‘having it all’ to a younger generation wouldn’t mean the same thing as it does to me.

On the reactions to the piece, Slaughter said that they fall into three main categories:

“Many women have reached out to me to say they cried when they read the article, that it meant a lot to them. They describe what a day is like for them – maybe if I wake up at 4am instead of 5am I’ll have time to get everything done—and say that if they have to compromise on something they end up feeling like they’ve failed.”

A second category was criticism. Mentioning Rebecca Traister’s piece in Salon by name, she acknowledged that work-life balance could be considered an issue of privilege, but sort of hedged the question and didn’t delve into some of the ways she could work for a more intersectional and inclusive approach into her analysis of the issue as much as I would have hoped.

The third category of criticism Slaughter named could be summed up thusly: what about men!? She said that she’s heard from countless men who’ve faced taunts, criticism, or even retaliation for taking paternity leave or other measures to be good, involved fathers. They need a change in how the world views them as well, she argued.

Slaughter wants to write a book focusing on the actual solutions she started to outline in her article. She also plans to use the book to do a better job of telling these men’s stories and how they fit into the equation, as well as bringing in her foreign policy experience to tie the conversation to a larger one on America’s place in the world. In the midst of all this, she has a day job teaching and writing about foreign policy in the US, and is, of course, raising her children.

Perhaps most personally exciting were Slaughter’s views on feminism. When I asked if she identified as feminist, she answered in the most swoon-worthy way possible.

“I am so glad you asked this. I am a proud card carrying feminist,” she said with a wide smile.

“We’ve come a long way but that’s precisely it- we have come so far we have to keep going.”

She also acknowledged that she has only seen success because of the work of feminists that came before her, and that she “stands on their shoulders”.

“We haven’t gotten to the place that having a family is the same for a woman as it is for a man,” she said. “I saw writing this article as a deeply feminist move...I wrote this article as the next step towards equality.”

One of the most enjoyable parts of the interview was how candid she was about her own hesitations and insecurities, even as she was embarking on this brave and bold mission.

Speaking out on a topic that was so explicitly personal and feminist and apparently provocative, “I was worried I destroyed my professional identity,” she confessed. And so was her mom! “My mom’s upbringing was that women don’t put themselves forward. The sense that I was out there, exposed, was controversial. So some of her reaction was what we have to fight against even though she is 100% supportive.”

In closing, Slaughter acknowledged that “being a mother for me is the most important thing in my life” even as she admitted “it was hard for her” because it’s not a popular thing for a high-powered feminist woman to say. She nevertheless maintained “That’s my real life. And there’s something wrong when somehow that’s less valued. I am a much better leader because I’m a mother.  We have tipped maybe too far in the direction of career as the source of value -- and that’s for both men and women.”