Hey, Romney: Show us your numbers

Mitt's campaign claims they have strong internal polls -- why not release them? 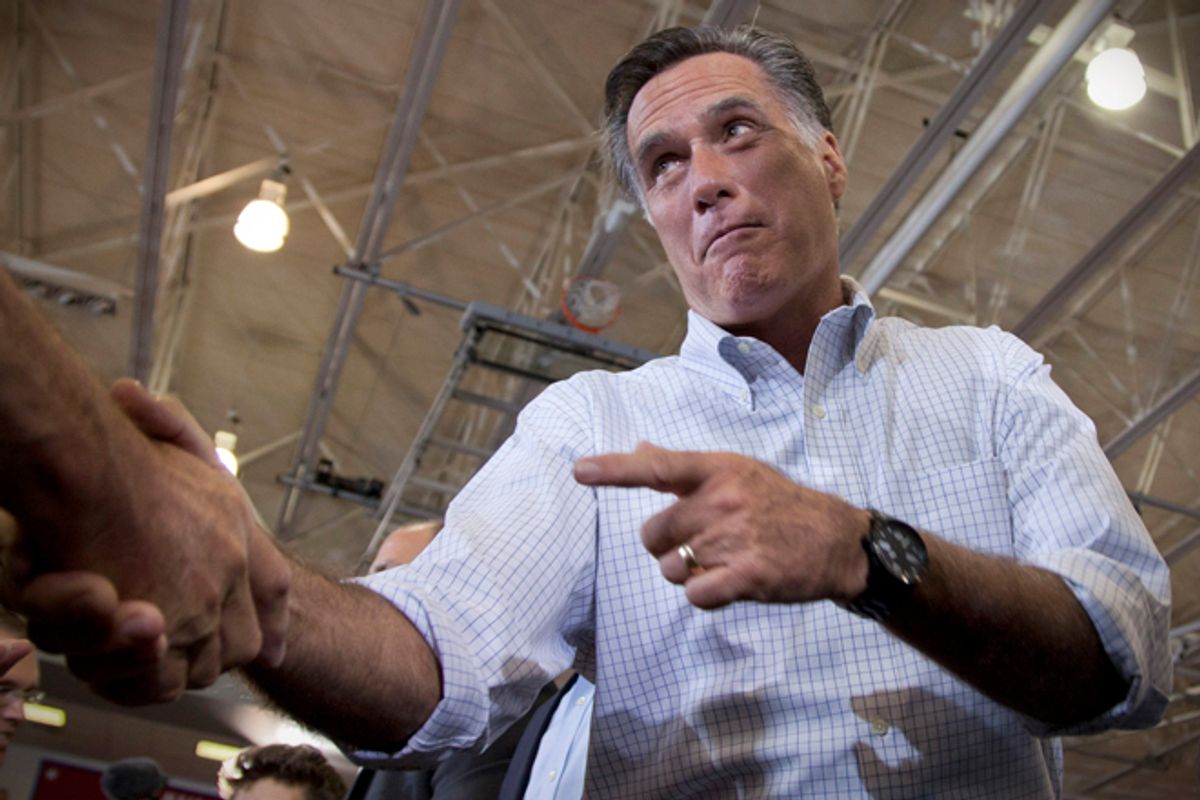 By now, we all know polls showing Obama winning the election are biased liberal media hogwash intended to embolden Democrats and dispirit Republicans. At least that's what the hackier reaches of the conservative media, and some on the Romney campaign, want us to believe. If only someone had other, unskewed polls that haven't been compromised by the mainstream media's Obama apologetics. There’s the right-leaning Rasmussen, but its surveys have been found to be "biased and inaccurate" and it's just one outfit. Even Fox News’ polling unit has apparently been compromised by the left-wing media conspiracy.

Actually, someone does have numbers showing Romney doing better than in the mainstream polls -- the Romney campaign. Rich Beeson, Romney’s political director, told reporters on the campaign bus that they have internal polls showing Romney in good shape: “The only point I want to make is that we trust our internal polls.” “I kind of hope the Obama campaign is basing their campaign on what the public polls say,” Beeson said, suggesting the public polls are wrong. So what do the internals say? “I’m not going to get into the specifics of what our polls say or don’t say,” Beeson said.

You'd think Mitt Romney would have learned the lesson of his tax returns. For months, as he avoided releasing more than two years' worth of returns, Romney essentially asked people to trust him that the returns contained nothing compromising. By merely releasing his returns, Romney could have immediately shamed Harry Reid for alleging that Romney paid no taxes for 10 years. But he kept them private. (On Friday, the campaign released a letter from Romney's accountant summarizing 20 years' worth of returns, but not the returns themselves.)

Now, Romney could easily dispel the media narrative that he’s losing, or at least put an asterisk next it, by releasing the internal polls. There’s a long precedent for this. Candidates often make a big splash about their surprising internals, such as the release today from Democrat Christie Vilsack’s campaign showing her within just 2 points of Tea Party Rep. Steve King. But in the absence of that data from the Romney campaign, it's easy to assume the worst.

Meanwhile, Michael Kinsley noted in Bloomberg View that Romney has a lot in common with another former Massachusetts governor, Michael Dukakis, who lost his 1988 presidential bid by an embarrassingly lopsided margin. In addition to his patrician bearing and hapless campaign-management style, Romney is like Dukakis in another way that Kinsley doesn’t mention.

When they were down in the polls, both blamed the polls instead of themselves. “The business of polls is really having a terrible effect [on the election process],” Dukakis told reporters weeks before the election. “Now we’ve got a new set of numbers that has absolutely no relationship to anything that we have or other people have ...  You do a debate and you’re going to have a poll on it. It really drives the process and everybody’s doing it.” In fact, Beeson is taking a page directly out of Dukakis campaign chairman Paul Brountas’ playbook, almost word for word. As the Chicago Tribune reported on Oct. 18, 1988:

“If there is an increase in the gap,” commented campaign chairman Paul Brountas, “it may be attributable to some of the stories about the debate.”

It was the first time senior campaign officials blamed the media for Dukakis’ slide in the polls. Brountas said the campaign`s own poll numbers show “nothing like that.” But when asked if their numbers also show a widening gap, he replied, “I don’t want to talk about our numbers.”

In the end, George H.W. Bush captured almost four times the number of electoral votes as Dukakis, who won just 10 states and the District of Columbia. The polls weren't wrong then and they're probably not now. But if they are, there's a very easy way for Romney to convince us: Release the internals.