In Romneyland, the line separating reality from satire is growing increasingly blurred. Does it even matter? 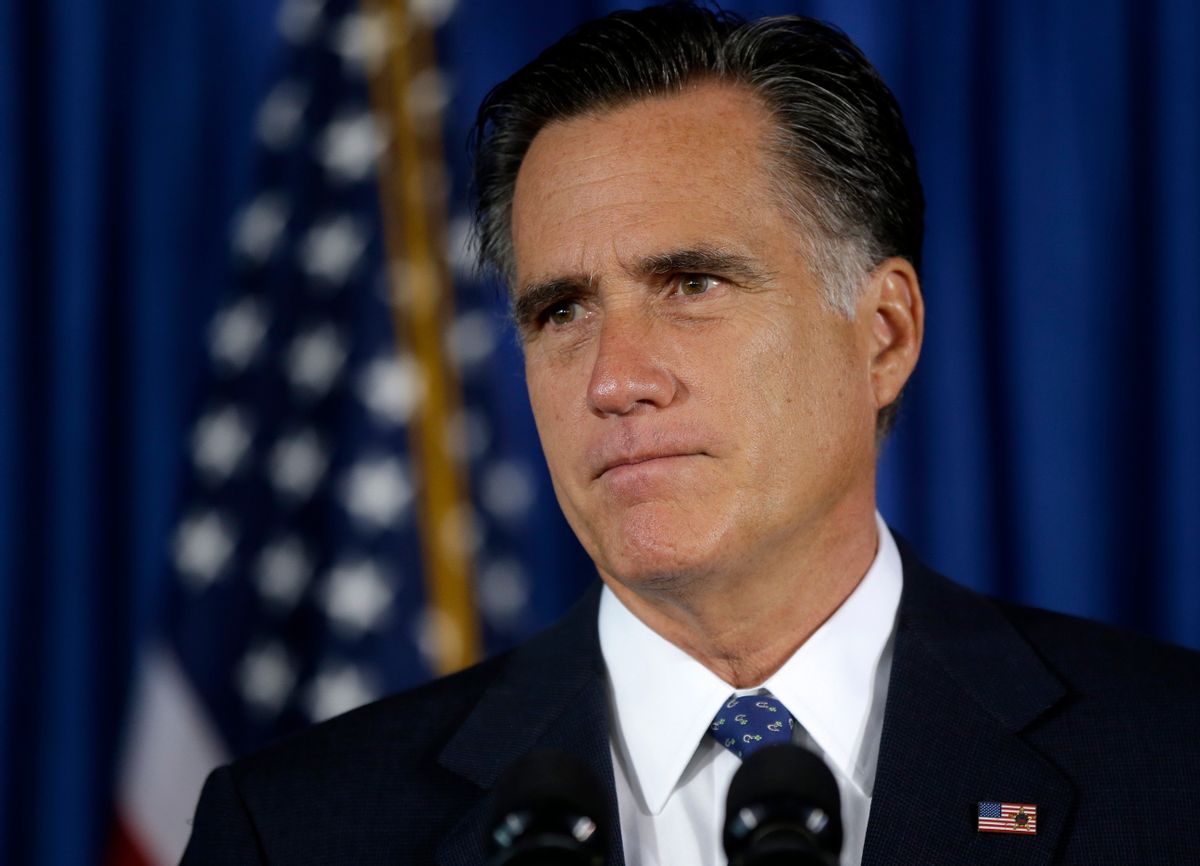 Certainly Romney has had a bad few weeks.

His remarks at a Florida fundraiser in May painted him in a disastrous light — as a hard-hearted, cold-blooded elitist who could simply write off more than 47 percent of the population as irresponsible moochers, just for having the temerity to receive hard-earned pensions or other benefits from Uncle Sam.

The surreptitious video of that ill-fated talk, released by Mother Jones, now serves as a backdrop for a doubtless effective attack ad for President Barack Obama.

But just as Romney’s “47 percent” remarks was fading into the mists of time, his offhanded comment about airplane windows will haunt him.

At a media event on Tuesday, Romney was talking about a recent scare his wife, Ann, had had aboard an airplane. The plane had filled with smoke and had to make an emergency landing.

“You can’t find any oxygen ‘cause the windows don’t open, I don’t know why they don’t do that,” he said, to general laughter.

His wife Ann Romney told Jay Leno that night that Mitt was kidding. “It was his way of making light of how worried he was about me,” she said.

Reporters and commentators, even those critical of the former Massachusetts governor, who heard the remarks are convinced he was speaking in jest.

But the pundits and Twitterati have been having a field day.

“Romney promises to turn Air Force One into the world’s first convertible airplane if elected,” was a typical offering.

We expect this from Stephen Colbert, who very effectively lampooned Romney’s remarks in his Burger King fly-through segment Tuesday night.

But the rest of us maybe need to chuckle and move on. There are many reasons that Romney is having a hard time these days, but his understanding of aerodynamics is not one of them.

Romney is awkward, yes. He is twitchy and uncomfortable. He simply cannot tell a joke without seeming mean-spirited – witness his comments in August in Michigan.

"I love being home in this place where Ann and I were raised, where both of us were born,” he said. “Ann was born in Henry Ford Hospital. I was born in Harper Hospital … No one's ever asked to see my birth certificate.”

Okay, it was in bad taste. It was poorly delivered. But even Romney’s harshest critics must have known that he was not signing on to the “birther” movement, which purports to believe that Obama was not born in the United States.

That is not the problem. The real difficulty is that, in the growing snowball of missteps, gaffes, and general catastrophe that is the Romney campaign, no one can tell any longer when the critics are kidding.

He details how Romney’s running mate, Paul Ryan, is running so hard to get away from the candidate-in-chief that he calls him "The Stench," and refuses to take his phone calls. Ryan also delivers endless presentations on PowerPoint, which as the writer slyly states, “was released by Microsoft in 1990 as a way to euthanize cattle using a method less cruel than hitting them over the head with iron mallets. After PETA successfully argued in court that PowerPoint actually was more cruel than iron mallets, the program was adopted by corporations for slide show presentations.”

It is not very funny, and a bit ham-fisted. But within hours it has hit the airwaves — reported as fact, not satire.

It all may have started with a column in the New York Times by conservative pundit David Brooks. Published during the Republican National Convention in August, the column supposedly held up to ridicule all of the silly misconceptions that journalists were circulating about the poor, misunderstood Republican candidate.

“He was given the name Mitt, after the Roman god of mutual funds, and launched into the world with the lofty expectation that he would someday become the Arrow shirt man.”

The column was very funny; and seemed, at least to the liberals, like a very cogent characterization of the rather starchy candidate.

Brooks could not understand what all the fuss was about, but vowed never to do it again.

"Democrats loved it, Republicans hated it. The lesson is never tell jokes about politics,” he told fellow journalist Dan Amira.

Pity, it was a corker.

The Republican candidate is slipping in the polls. Here in Ohio, it is looking more and more unlikely that he can carry the state without which, as we are constantly reminded, no Republican has ever won the White House.

Romney, Ryan and Obama were all in the state Wednesday, trying their best to rally voters. Romney seemed nervous and uncomfortable, despite being buoyed by the likes of golf legend Jack Nicklaus, Ohio Gov. John Kasich, and Ohio Senator Rob Portman.

Obama, by contrast, seemed relaxed and happy. He has reason to be.

Peggy Noonan, a columnist for The Wall Street Journal, has been scathing in her critique of Romney’s campaign. The conservative author, who was a speechwriter for Ronald Reagan, has no patience for the kind of nonsense she sees around the Republican team.

“This week I called [the Romney campaign] incompetent, but only because I was being polite,” she wrote last Friday. "I really meant 'rolling calamity.'"

It is damning indeed. But perhaps she was only kidding?