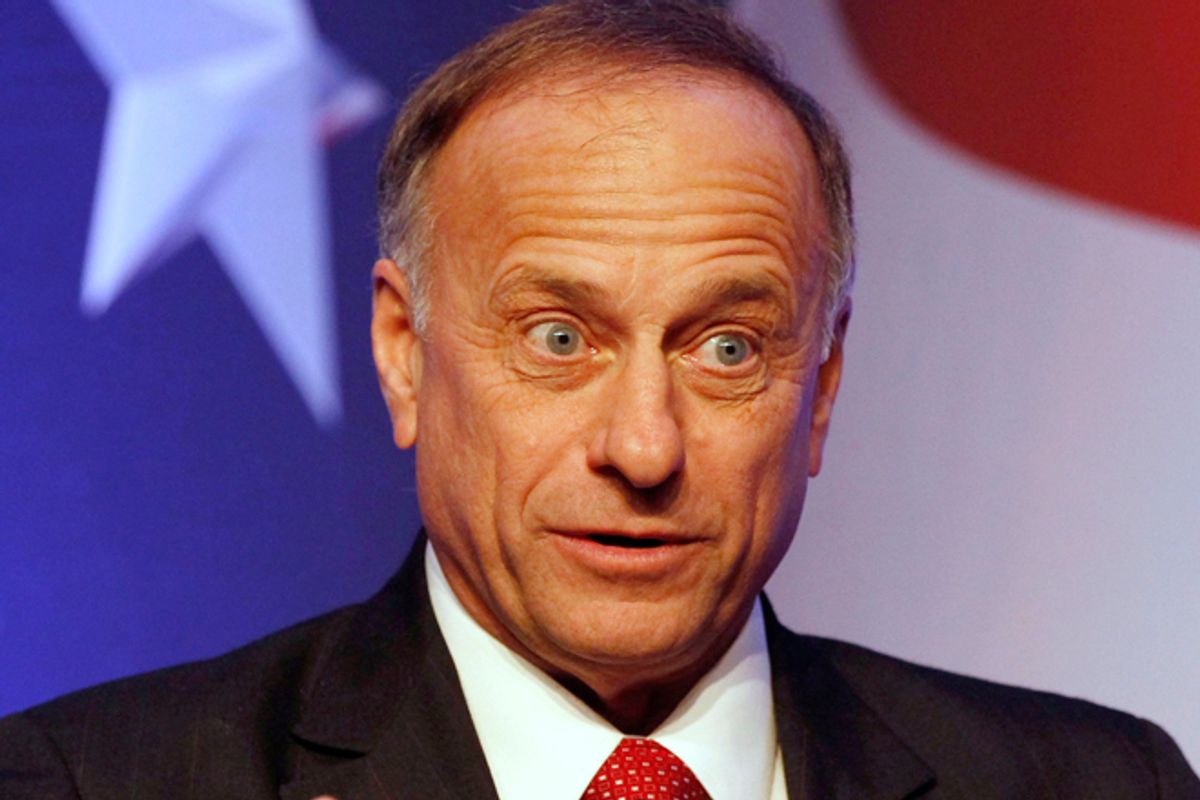 An internal poll released today by Democrat Christie Vilsack shows her essentially tied with GOP Rep. Steve King in Iowa's new 4th District. A separate public poll, conducted by PPP and also released today, found similar results, with King leading Vilsack by just 3 points at 48 to 45, within the margin of error. The congressional race gives Democrats a chance to take down one of the country’s most prominent Tea Party leaders, a man who once remarked that the president "favors the black person" and, in 2008, predicted that al-Qaida would be "dancing in the streets" if Barack "Hussein" Obama won the presidency.

The internal poll (see the full memo here), conducted by Democratic pollsters Greenberg Quinlan Rosner Research, shows King at 46 percent and Vilsack at 44 percent. “This one will likely go down to the wire. But two concurrent surveys show all the momentum behind Christie Vilsack," the pollsters write. A May GQRR showed King up by 16 points.

Iowa State University political science professor Steffen Schmidt told the Ames Tribune of King, “He should have much higher ratings ... I don’t read it as ‘Christie Vilsack is a little bit behind anybody else,’ but I would read it as ‘Jeez, an incumbent should have an advantage in a question like that.’”

“As voters learn more about these candidates, it’s not surprising that congressman King is losing steam,” said Vilsack Campaign Manager Jessica Vanden Berg. The GQRR poll also shows that King’s approval rating is now underwater, with 44 percent opposed to the job he has done in Congress and 41 percent in favor.

Vilsack, the wife of former Iowa Gov. Tom Vilsack, is running a strong bid in the Republican-leaning district as a moderate who will focus on local needs instead of trying to be a national celebrity. The race is one of a handful in which Tea Party favorites -- see:  Reps. Michele Bachmann and Joe Walsh -- could be knocked out.