The guys behind "Won't Back Down" stand to profit from education privatization. No wonder the movie hates on teachers unions 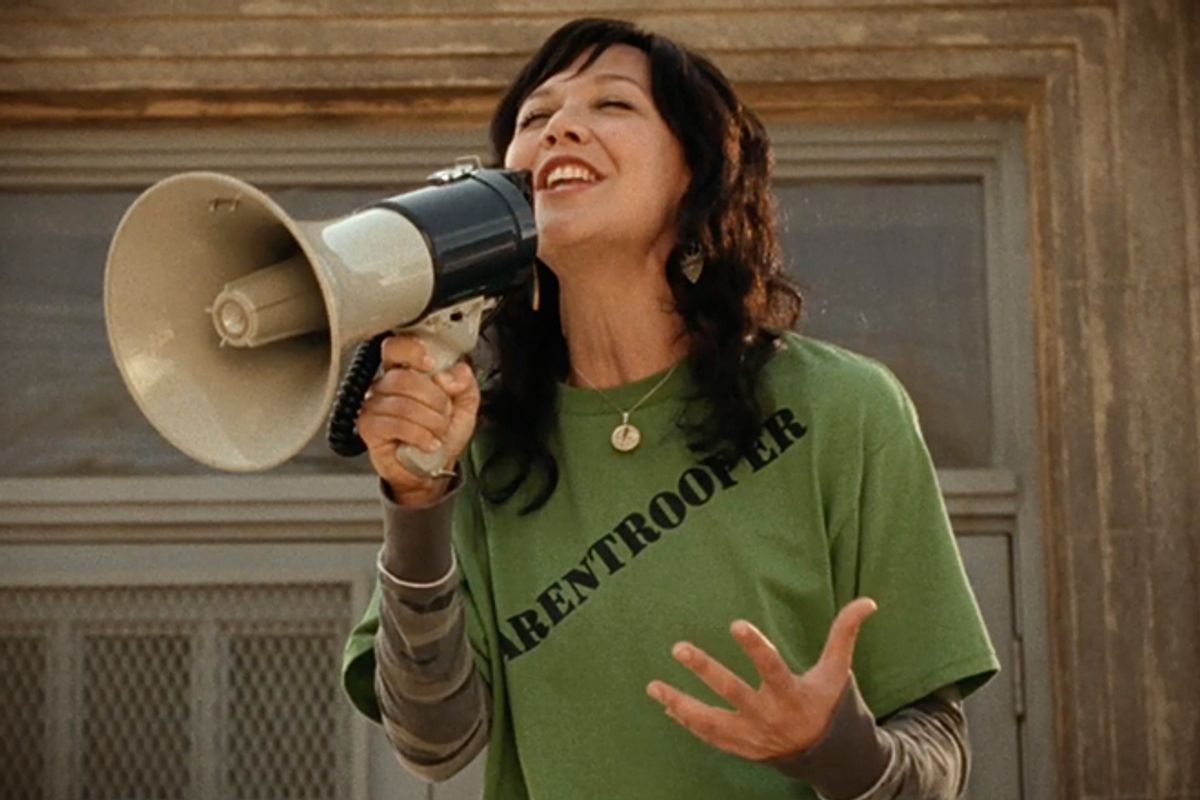 Maggie Gyllenhaal in "Won't Back Down"
--

The first thing to know about Friday’s opening of the school-choice drama "Won’t Back Down" is that the film’s production company specializes in children’s fantasy fare such as the "Tooth Fairy" and "Chronicles of Narnia" series. The second thing is that this company, Walden Media, is linked at the highest levels to the real-world adult alliance of corporate and far-right ideological interest groups that constitutes the so-called education reform movement, more accurately described as the education privatization movement. The third thing, and the one most likely to be passed over in the debate surrounding "Won’t Back Down" (reviewed here, and not kindly, by Salon's own Andrew O'Hehir), is that Walden Media is itself an educational content company with a commercial interest in expanding private-sector access to American K-12 education, or what Rupert Murdoch, Walden’s distribution partner on "Won’t Back Down," lip-lickingly calls “a $500 billion sector in the U.S. alone that is waiting desperately to be transformed.”

Walden Media is unique in Hollywood in possessing the will and the expertise to effectively promote the cause of education reform. Its conservative Christian CEO, the billionaire donor and strategist for right-wing causes Philip Anschutz, has built what may be the only media empire ideologically inclined and powerful enough to assemble an all-star, all-union cast to carry water for an anti-union crusade on 2,500 screens in wide release (though apparently not strong enough to get that cast to admit it). "Won’t Back Down" is, as even teachers' union leader Randi Weingarten admits, an emotionally charged and well-crafted piece of propaganda. For neophytes to the debate -- and Walden executive Chip Flaherty has described these people as the film's target -- "Won’t Back Down" will send warm "Stand and Deliver"-meets-"Free Willy"-style fuzzies fluttering around the otherwise cold phrase “school choice.” The company hopes the film’s emotional wallop will linger long enough to drive downloads of the film’s activist tool kit and enlist new foot soldiers in the education reform movement. But the thing is, "Won’t Back Down" is no more useful in understanding the real politics of that movement than Walden Media’s adaptation of "Charlotte’s Web" prepares audiences for careers in chicken farming. Of course, that’s not the point -- Walden is aiming for the heart, not the head.

"Won’t Back Down" dramatizes -- approvingly -- the execution of "parent-trigger"-style laws that have been passed in three states and are being considered in a dozen more. These laws give parents the power to form discontented majorities and sell their local public school to private charter school companies. As critics have noted, there is no mechanism in these laws to take over failing private schools. In the real world, the two instances in which the parent-trigger has been pulled have been legal and community disasters, and there is indication that even charter school companies are wary of taking over entire failed schools as opposed to skimming the cream off of several.

But to focus on the parent-trigger plot mechanism in "Won’t Back Down" is to misunderstand the long-term strategy of the deep-pocketed education reform movement. Its plan is to undermine public education from all fronts, to keep throwing reform bills at statehouse walls and see what sticks. Jeb Bush’s Foundation for Excellence in Education, the reform movement’s own version of ALEC (the American Legislative Exchange Council), provides legislators with thick “policy combo-packs” and encourages them to file legislation in flurries. Anything that moves the needle of public opinion toward privatizing K-12 is a victory. And it’s a victory for more than just for-profit charter and private school companies. The school-choice army is increasingly diverse. It has a growing “digital learning” wing of technology and software companies eager to “individualize” and “virtualize” American classrooms. There are film education companies like Walden Media, more about which in a minute. There are educational testing companies, such as News Corp’s Wireless Generation, which have been used effectively to pummel public education but have an uncertain future in the brave new unregulated world imagined by corporate reformers. Keeping the alliance flush with tactics and strategy are the libertarian think tanks at war with teachers' unions and the idea that the rich should pay education taxes to support schools their children do not attend. (Given the movement’s storefront claims to care deeply about poor students of color, it is odd -- well, not really -- that its lineage begins with the voucher schemes Milton Friedman cooked up in the immediate wake of Brown v. Board of Education.)

Trigger laws are just one menu item in the school choice movement’s “combo pack.” The groups listed above are also currently engaged in a vigorous effort to beat back the threat that states will adopt common core-curriculum standards for English and math. It wasn’t long ago that conservatives defended the idea of a shared educational base in American history and literature. But business is business. School-choicers understand common cores can only complicate the fracturing, personalizing and ravaging of that $500 billion public education market. At the American Legislative Exchange Council’s national conference in Salt Lake City this August, strategizing to defeat the core was high on the agenda of the group’s educational task force. ALEC documents described core curricula as a “federal intrusion” to be resisted. Also high on ALEC’s agenda was the promotion of the “Statewide Online Education Act,” which would increase the scope for digital education companies in public schools.

Among the companies with an interest in moving curricula away from a standardized core of old cracked-cover books, Walden Media, the force behind "Won’t Back Down" and more than a few hefty contributions to ALEC and the anti-union National Right to Work Legal Defense Foundation’s Teachers Union Initiative. Walden is not a film production company so much as a synergy-minded film and education company. Along with studio offices in Los Angeles, the company maintains a large Boston office for its Education, Outreach, Interactive and Publishing division. The company produces films based on children’s books that it cross-promotes in teacher’s guides designed for the classroom, the ultimate “captured audience.” It also scoops up brands with an established K-12 presence. Last November, Walden purchased the live-action film rights for "Where in the World Is Carmen Sandiego?" which is taught in half of the country’s grammar schools.

Among the films listed on Walden’s educational films Web page is "The Chronicles of Narnia," a fantasy film the company suggests teachers use in lessons on “Arts and Creativity, Math, Science, [and] Social Studies.” The company provides downloadable teaching aids for activities such as having “students try their hand at composing movie music and building a scale-model of a set from their favorite scene from the story.”

Walden executives laid out their corporate strategy in a 2003 seminar sponsored by the Technology, Innovation and Education program at Harvard’s Graduate School of Education. According to a report of the event, Walden’s then-director of educational content, Jean Kwon, described Walden’s films as “inherently educational” and the perfect “entry point” to subjects such as the Civil War. Kwon touted the company’s product line of “interactive classrooms and teacher-training materials to complement their films, children’s theater, and books,” and gushed about the company’s creative efforts to penetrate classrooms. One of these involved corralling hundreds of students in the fourth through sixth grades into Regal theaters in more than 20 states, where Walden executives market-tested teacher and student reaction to their films and teaching aids. “Although Walden Media has great hopes for the workshop,” explained the reporter, “they realize that it has limitations. They have to work with some teachers' narrowly defined view of literacy and text and their wariness that movies detract from reading literature.”

The establishment of a national core of history texts, standard math lessons and classic literature would limit Walden’s education business, as would restrictions on the digitization and privatization of American K-12. In the vision articulated by the reform movement supported by Walden, for-profit schools would be liberated to “put children first.” In other words, they’d be deregulated. No core requirement burdens, no teachers' unions, no annoying laws about prayer in the classroom or religious instruction.

It’s possible, if not likely, that in this deregulated K-12 future, the use of Christian-themed fantasy movies like "The Chronicles of Narnia" to teach social science, math and set design won’t seem so bad. Having spent some time reporting on the education privatization scene, I have seen and heard darker portents. At last year’s “Excellence in Action” summit in San Francisco, I overheard two digital education executives discussing the possibility that News Corp’s education division could move into educational content by selling packages produced by its studio assets and, yes, Fox News. I also met an entrepreneur who tried to convince me that the future of education was 3-D. He was in the conference vending hall repping his firm, Elixir XES 3D, which specializes in glassless 3-D video monitors. “With this technology we can bring dinosaurs or presidents or whatever to life!” he said. “Learning can be fun, just like a video game or a 3-D IMAX movie.” He then handed me a paper titled “3-D: The Technology Brought a Pot of Gold to the Motion Picture Box Office. It Has the Potential to Bring ‘Golden’ Learning Back to Our Schools, at Warp Speed.” The paper, which seemed simultaneously geared toward investors, advertisers and school board officials, explained that his super-exciting XES 3D technology is currently in 10 school districts and counting, bringing benefits to both students and advertisers.

“An intrinsic property of 3-D advertising is media richness,” the pitch read. “Consumers interacting with products in 3-D advertising ... results in a positive consumer response as measured by increases in product knowledge, brand attitude, and purchase intention.”

If the education privatization movement is at bottom about one phrase, it isn’t parent empowerment, or teacher accountability, or tailored learning — it’s purchase intention. The purchase of digital learning software, the purchase of online credits and diplomas, the purchase of copyrighted fantasy films that supplant musty old paperbacks, the purchase of brick-and-mortar schools that are the cornerstone of America’s civil religion. Walden Media and its allies are hoping this great sell-off gets a boost this weekend, when an unknown number of Americans purchase tickets to their deceptive little movie.