Why is airport art so lame?

Of course there are exceptions, but this setting only amplifies the fundamental problems with big, public displays 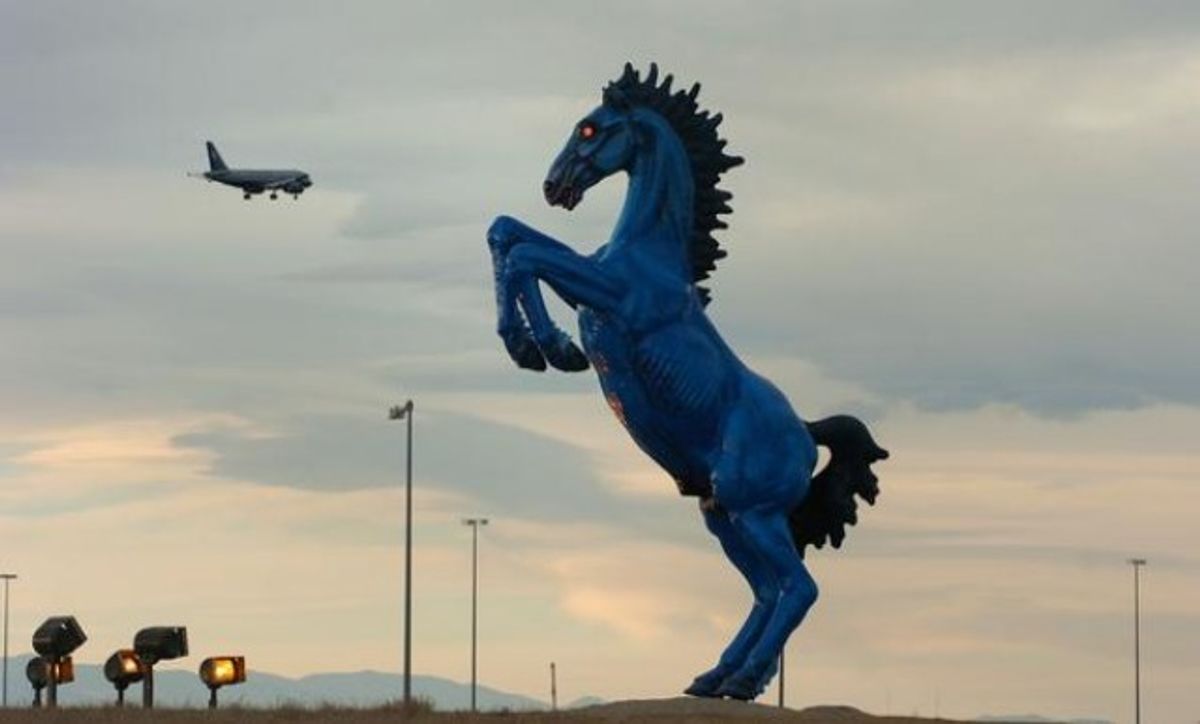 BERKELEY, California — These days, we experience the world on a much more international level. Whether online or through travel, the world feels smaller to us. As this trend continues, artistic experiences hosted online, available for anyone in the world with a internet connection to access, grow increasingly diverse and interesting. Unfortunately, that same diversity can’t be ascribed to the physical counterpart of global space, where the base unit of artistic experience just might be the airport.

The public art on display in airports often forms a traveler’s introduction to a city. I have been to many cities only in the sense that I had a layover in the local airport. As travelers make their way from plane to exit or from pick-up to hotel, their travel weary eyes are still hunting for cues about the new environment. Airport art provides those cues, giving hints as to what a new city might be like.

But that has its problems, of course. The airport as a platform for artwork presents a tricky space to work in. The diversity and quantity of airport travelers is huge compared to most museums; airports most likely want to represent their cities in a positive light to anyone passing through; and the chaotic levels of security don’t exactly provide a contemplative mood. It’s easy to get lost in The Metropolitan Museum of Art, but you never have to take a bus to get to another section and you definitely aren’t strip-searched upon entrance.

Issues of setting aside, airport art can present us with a sliver of what a city wants to say about itself. Which artists are chosen and what type of work is on display are indicative markers of political, economic, and cultural aspirations. For instance, Denver represents itself with a colossal, satanic-looking mustang (seen at top) to 28 million travelers every year. To put that number into context, the population of Texas is just over 25 million. It’s not exactly a warm welcome from Colorado, but it says a lot about the rugged Coloradan image — there are even still a few wild mustangs in the state.

It may come as no surprise that NYC chose to represent itself with one of its own rather famous and almost universally well-liked artists, Alexander Calder. Roughly 47 million tourists flock to NYC annually. Part of that tourist population arrives to see some of the major cultural institutions NYC is famous for. Calder is both an important artist and an accessible one; everyone from toddlers to art critics can appreciate his mobiles in any kind of context.

Similarly, Toronto has chosen a large and imposing Serra to welcome their guests. As much as I love Serra, his work is best appreciated in the quiet of Dia:Beacon, and their rather foreboding nature doesn’t seem to shout “Welcome to Toronto,” or “Have a safe flight!” Serra’s work is about being aware of the physicality of your body, not something I ever want to mull over while inside of a plane traveling 400 miles per hour at 35,000 feet. I’m not usually afraid of flying but — no, thank you. Luckily, Toronto did not only rely on Serra to proffer a welcome. The airport’s permanent catalogue has some more uplifting work, including an especially nice installation by Sol LeWitt, “Wall Drawing #1100, Concentric Bands.”

While airport art often recalls clouds and strives to provide a feeling of lightness to viewers, “The Body of Lake Michigan” is a topographical interpretation of the eponymous lake as seen from deep within the Earth’s crust — the exact opposite perspective as would be seen from an airplane. This museum-quality piece recalls Maya Lin’s topographical landscapes, and celebrates the main natural landmark of Chicago both artistically and scientifically. I find this shift in perspective before or shortly after flying a really nice touch. We so quickly take for granted new perspectives like the view from an airplane window. This piece reminds me how important and unique our vantage points often are.

Nothing says welcome like arguably one of the worst sculptures by a famous artist. I don’t know where Columbus, Ohio found Lichtenstein’s “Brushtrokes in Flight,” but the only equally bad piece by the artist I have ever seen is his gaudy boat at Storm King. The type of flight depicted is one that I hope my pilot never aspires to. A friend from Colombus reported on Facebook that the piece is “pretty hated.”

The part of me that loves NYC can always find a way to ridicule Miami. But honestly, the beaches are beautiful, the water is clear and filled with tropical fish, and the women are gorgeous. Miami is a great place to be. This pleasant installation of rainbow light appears similarly pleasant and pleasing to look at. It might not be so conceptual strong as the Richard Serra in Toronto, but who needs that in an airport? Who wants that heaviness while sunning on a beach in Florida? This piece welcomes vacationers to a great time relaxing and playing in the sun.

Perhaps unsurprisingly, San Francisco greets its visitors similarly softly with an ephemeral ceiling installation. “Every Beating Second” refers to a poem by Allen Ginsberg, who frequented San Francisco’s famous City Lights bookstore and was a staple of the Beat Generation. This installation is poetic, cloud-like, and contemporary, with a little craft mixed in. I’ve only been in San Francisco for a couple of weeks, but it seems like a good introduction to the Bay Area vibe.

Although the group show Sea Change features 17 artists, how could I not choose the work that uses glaring lightbulbs to represent Los Angeles? And how could LAX not choose to use only screen-based artwork to greet its tourists to the land of Hollywood? If you spend enough time in LAX and LA as a whole, you’ll catch hopeful rockstars with guitar cases in tow and young actors yearning for their big breaks. LAX does its part to set the stage.

The fundamental problems with public art are only amplified in an international airport setting. How can airports with their international audiences and huge numbers of visitors fit meaningful work into such contested space? The Metropolitan Museum of Art welcomes around 5 million visitors a year, a huge number for an art museum. But that still pales in comparison to the number of viewers who see Luis Jimenez’s “Mustang.” How do airports consider and represent their public? What do public artworks say to a city’s visitors? These eight airport artworks are a good beginning for the longer conversation.