Many have mocked the prime minister’s crude bomb cartoon. Others have lauded him for marking a red line with Iran 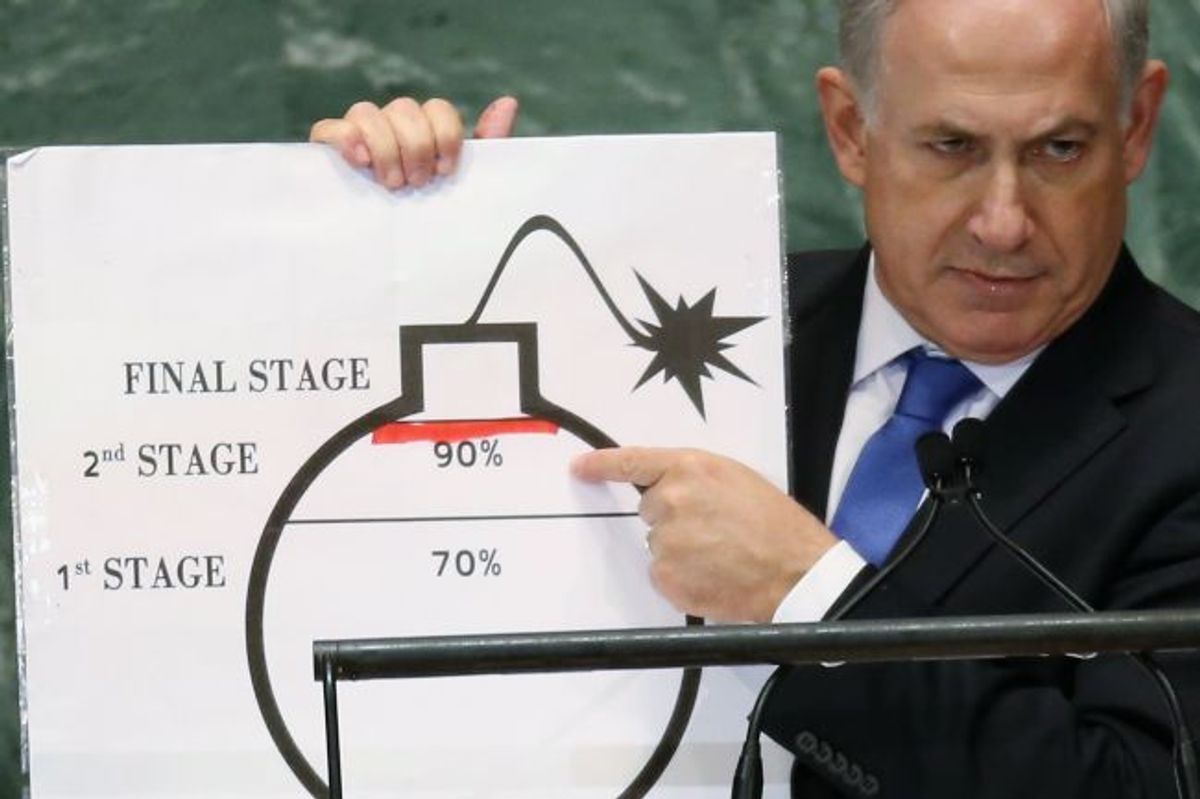 JERUSALEM — Israeli Prime Minister Benjamin Netanyahu drew the world's attention with his speech at the United Nations Thursday, but surely not all of it was the kind of attention he was hoping for.

A primitive cartoon of a bomb depicting Iran's progress toward building a nuclear weapon, on which he drew a thick red line just under the point of detonation, became the subject of bafflement, jocularity, derision and even some approbation at the expense of serious talk about the substance of his speech.

“Netanyahu's aim was to have everyone speak about [the drawing] and to demonstrate that time is running short,” said professor Eytan Gilboa, an expert on Israel-US ties at the Begin-Sadat Center for Strategic Studies at Bar Ilan University.

"Anyway, those making fun of it don't have better solutions," he added.

A lot of fun was made. Minutes after Netanyahu's speech, Israeli jokesters flooded the internet with cheeky images.

Several outlets commented on a recent spate of doodles by Netanyahu, including a drawing of Jerusalem and one of an apple tree laden with fruit.

"It turns out he's a frustrated illustrator," mused Amos Biderman, a cartoonist at the daily Ha'aretz newspaper.

The principal loser may have been Palestinian President Mahmoud Abbas, who spoke just before Netanyahu. Abbas stepped up to the podium to deliver a fiery speech accusing Israel of ignoring the peace process and engaging in "ethnic cleansing" in Jerusalem — only to be disregarded by Netanyahu, who stole the show with his bomb cartoon.

Ironically, Netanyahu's drawing resembled nothing so much as the round head of Handala, the iconic cartoon image of an anonymous, faceless Palestinian resisting occupation.

Biderman said he initially believed the Israeli leader’s speech looked like amateur hour. No one seemed to notice.

"Not just the drawing seemed infantile, but standing there in front of the UN General Assembly and pulling out a graph like some 6th-grade teacher seemed very childish,” the cartoonist said.

“But after I digested it, I actually think it worked superbly," he added. "He got his message across concisely and in a way that stays in your mind. As marketing, it worked."

Ya'akov Kirschen, the author of the Jerusalem Post's "Dry Bones" cartoon strip, agreed in his own way, with a parable about the Yiddish language.

"There is an old question about what is a schlemiel, a schlimazel and a schmendrick," Kirschen said.

Someone is sitting in a restaurant and a waiter comes along and spills some soup. [The waiter] is schlimazel, [the customer] is a schlemiel. But the person sitting at the next table who says, "Excuse me, what kind of soup is that?" is a schmendrick. Anybody who thinks that the subject is the level of the drawing that the prime minister of Israel used to plead with the world that is ignoring us — is a schmendrick. That anyone could even comment on that!

Israeli analysts disagreed about Netanyahu's actual red line — not the one drawn with a magic marker, but the one placed before Iran.

For months, Netanyahu has publicly goaded US President Barack Obama to mark his "red lines" vis-à-vis Iran's nuclear development, while himself refusing to state what Israel's red lines before a unilateral attack might be.

In his speech Thursday, the prime minister set out two conditions.

The first, illustrated by the cartoon, was about the degree of Iran's enrichment, 90 percent indicating the intent to weaponize uranium.

The second, vaguer condition indicated a tight timeline. "They are well into the second stage" of uranium enrichment, Netanyahu said of the Iranians. "By next spring, at most by next summer, at current enrichment rates, they will have finished the medium enrichment and move on to the final stage. From there, it's only a few months, possibly a few weeks, before they get enough enriched uranium for the first bomb."

Writing in Iran Israel Observer, analyst Meir Javedanfar said, "Netanyahu’s red line is not so different to that of the US. This could be a clear sign that although in words the current Israeli and US government disagree, in reality, they are operating along the same lines and understandings. The fact that Netanyahu did not commit himself to a red line on Iran is another common feature between him and Obama. This is despite the fact that Netanyahu drew the line with his own hands."

Biderman, the Ha'aretz political cartoonist, disagreed. He saw a starker contrast between the US president and the Israeli prime minister popularly known as “Bibi.”

"There's no going back for him," Biderman added. "If in spring the Iranians move to 90 [percent] enrichment and we don't attack, that will definitely cause mockery of Israel around the entire world. Obama says 'we don't want to be put in a corner that obliges us on such and such date to attack.' Bibi comes along and says 'I don't accept anything beyond this red line. If that happens, when they move from medium- to high-level enrichment, we'll attack.' I thought he was very clear. A definite red line."

Gilboa, the university professor, is not concerned. "The speech was entirely effective,” he said. "After long saying that the West needs to set our red lines on Iran, yesterday he did just that. The speech was destined to put pressure on the United States and the West to strengthen sanctions and be extremely firm in upcoming negotiations with Iran."

An internal Foreign Ministry document leaked Thursday to Ha'aretz seems to indicate the same point. That is, despite the bluster and rhetoric, or perhaps just barely concealed behind it, Israel agrees with the United States that there is still hope for sanctions and not a military strike to halt Iran.