No, really: Penises are not shrinking

Rush Limbaugh is wrong about that. But here's the long (and short) of what science really does tell us about size 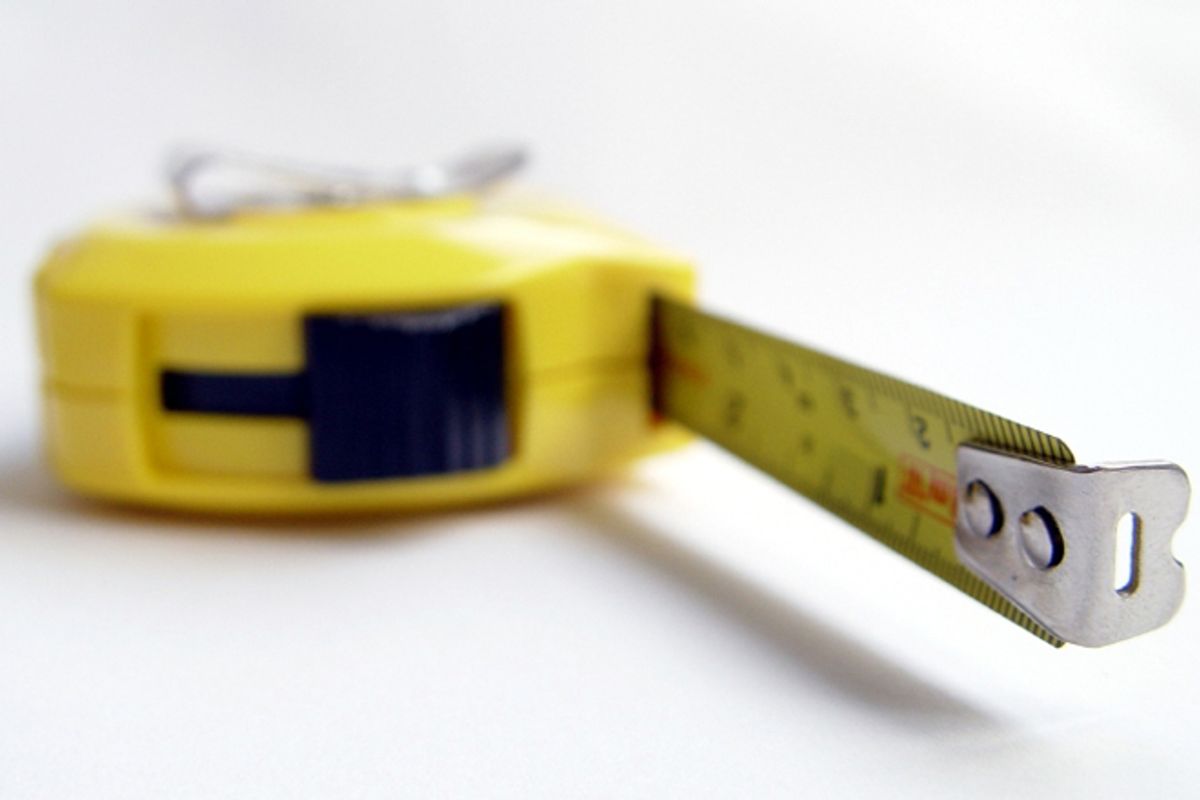 I’m often struck by the different ways we talk -- and don’t talk -- about men’s and women’s genitals. Recently, when women’s reproductive parts have made the news at all, it’s been in regard to political attempts to control what happens to women’s bodies (via policies related to contraception, transvaginal ultrasounds or “legitimate rape”).

But the politics of penis size? It’s forever about size.

Days ago, a new (and, I think, seriously flawed) study published in the Journal of Sexual Medicine claims – as its title says – “Women Who Prefer Longer Penises Are More Likely to Have Vaginal Orgasms (but Not Clitoral Orgasms).” Those who take the time to read the full study, however, will find that penis size doesn’t seem to be terribly important to women’s orgasms.

Buried in the study are data that demonstrate that most women in the study (about 60 percent) thought a man’s penis size didn’t influence whether or not they had an orgasm. And 6 percent of women said they were less likely to experience orgasm if a man had a longer than average penis. Oddly, the researchers didn’t present any data (or maybe didn’t ask about) orgasmic ability when having sex with a man with a smaller than average penis, even though plenty of women can and do have such an experience. Biased, much?

The study’s publication comes on the heels of a recent Rush Limbaugh comment in which he attributed the alleged shrinking, over the past 50 years, of men’s penises to women (well, specifically, to “feminazis”). Referencing an Italian study on the topic, he said: “I think it’s feminism … it’s tied to the last 50 years — the average size of [a male's] member is 10 percent smaller than 50 years ago — it has to be the feminazis, the chickification and everything else.”

Of course, this is ludicrous. But let's take Limbaugh at face value, and just examine his idea from a scientific perspective. Have men’s penises truly shrunk over the past 50 years? The source of these comments has been identified as an Italian study described on a website called chacha.com and that site doesn’t identify the specific study the data are supposedly from. This makes it impossible for anyone to understand or judge the reliability or validity of the data.

As far as I can tell – being a scientist who studies sexual behavior and penile dimensions specifically – there has not been a downward trend in men’s penile length. In other words: I know my way around the penis and I haven’t yet found evidence that men’s penises have been shrinking on a global scale. For one thing, there are few data on adult male penis size from 50 or 60 years ago (Alfred Kinsey’s team published some data, though the response rate was relatively low), so historical comparisons are difficult to make.

On an individual level, it is common for men to notice some shrinkage with age. After all, their muscles get weaker, testosterone levels decline with age, and many men experience poorer cardiovascular health (which is linked with erectile function) associated with age and various lifestyle behaviors related to smoking, eating and exercise.

At the group level, the size of a man’s erection has also been linked with a higher Body Mass Index, which the chacha brief mentions (several studies have found this to be the case). This is likely for two reasons: 1) Men with a great deal of abdominal fat may find that their fat obscures part of their penis; and 2) many but not all men who are obese also have other health issues such as cardiovascular health problems or diabetes, each of which can contribute to erectile problems.

And because we’re talking about the measurement of erect penises rather than flaccid penises, the intensity of the erection matters to the measured size. A less intense erection will result in a smaller erect penis than a more intense (harder) erection. (It’s important to note here, too, that obesity, heart disease and diabetes do not always go together; one can be thin and still have heart disease or diabetes and a slew of research suggests that fitness, and not just fatness, is relevant to health.)

But back to erections. Here are some things you should know about penis size and how it’s considered in research so that you can make sense of penis size studies and media headlines:

Penis size is measured in different ways. Some studies measure men’s penises in a flaccid – meaning soft or non-erect – state. In other studies, researchers report the length or circumference of men’s penises when erect (hard) or when stretched (which is just like it sounds). When you come across articles about penis sizes, make sure you get a sense of what kind of penises they’re measuring (flaccid, stretched or erect) so that you can understand the results.

Penis size depends on who measures it. In some studies, researchers or healthcare providers measure men’s penises. While these studies have the advantage of having the same folks measuring penises over and over again – and thus being consistent across study participants – there’s a downside. In at least one case, a number of men were unable to get an erection, knowing that a nurse was going to measure their erect penis. Other studies rely on sending men home to measure their own penis and then report the measurements. Of course, what they do to become erect (e.g., masturbate, have sex with a partner, fantasize, etc.) can also influence the intensity, and thus the overall size, of their erect penis.

Penis size doesn’t seem to have changed over the past few decades. Rid yourself of any ideas that penises are undergoing mass shrinkage (or growth). Although the average penis size varies by study, penile length and circumference are always within a small, limited and definite range of sizes. Studies that enroll very few men have less stable averages simply because there are fewer observations on which to draw. If you look mainly at the studies that measured the penises of 100 or more men, however, the numbers are far more stable and the difference from study to study is only about a centimeter or two.

Averages are only one piece of the puzzle. When I teach human sexuality classes to my students at Indiana University, I try to get them to think beyond averages and look at the larger picture. For example, although the average erect penile length is often around 5.1 to 5.8 inches (depending on the study), few men are exactly average. Most men cluster around the average, however, with some studies finding that about 95 percent of men fall within 2 or so inches of each other.

Size only matters a little bit. Because most men are similar to each other in terms of size – within an inch or 2 in either direction – size alone doesn’t account for the difference between lovers. Technique matters. Having a partner who listens to what you want matters. Being a partner who knows what you want, and can ask for it from a partner, matters too. An excitement and love for sex play a role in how good sex feels. And study after study finds that intimacy, connection and affection are important to women’s and men’s sexual satisfaction. Penile size? Vaginal size? For most people, and in the grand scheme of things, they tend to play only a supporting role in how people experience sex.