The first adult novel by Harry Potter's creator won't warm your heart, but it could save your soul 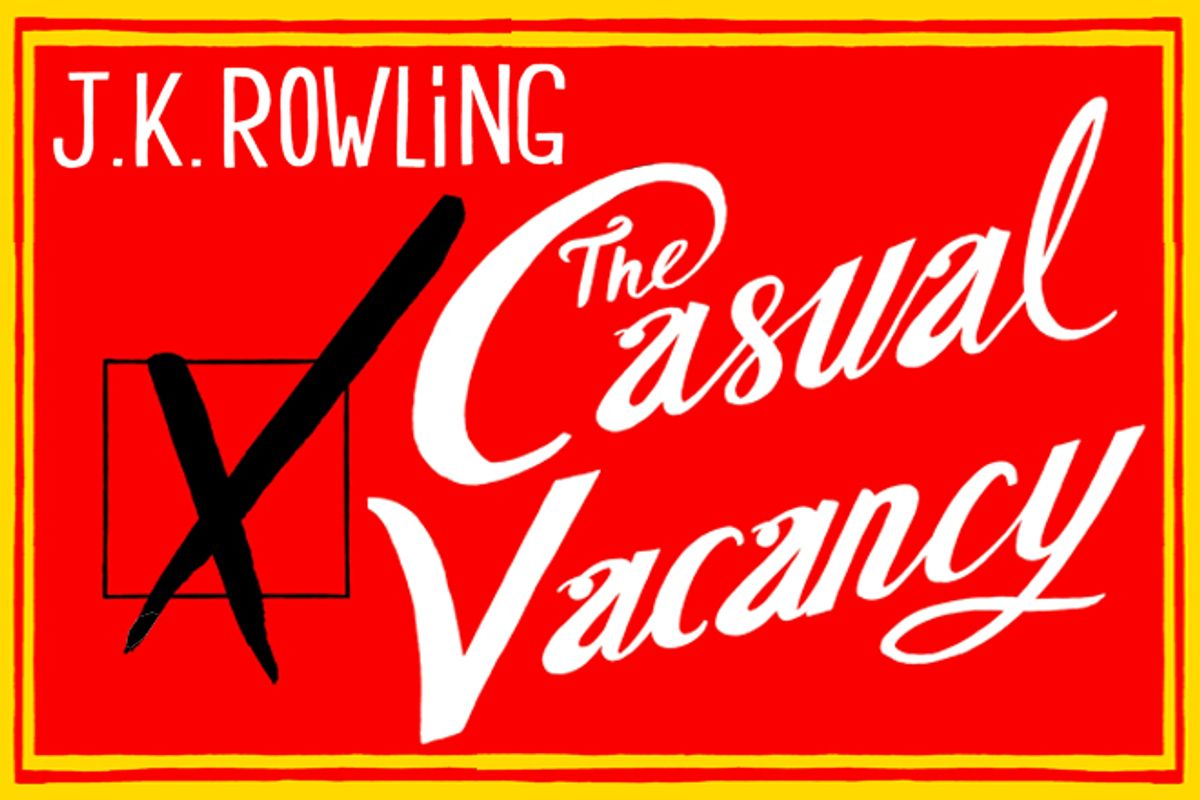 Fifty pages into "The Casual Vacancy," I was dismayed. This is like a Martin Amis novel without the virtuosic prose style, I thought — which is to say, a Martin Amis novel lacking the only thing people read Martin Amis novels for. The characters, a collection of petty, self-involved, unkind British villagers bickering over the slot left open in their parish council by the death of a particularly energetic member, were uniformly repellent and hard to keep straight. The book contained misbegotten sentences like "It was Harold's constant pleasure to open up in the mornings" (surely the shopkeeper was only able to obtain such pleasure in the mornings?), and this mangled jumble of prepositions: "There, in his poky office, Simon Price gazed covetously on a vacancy among the ranks of insiders to a place where cash was now trickling down onto an empty chair with no lap waiting to catch it."

But I persevered because "The Casual Vacancy" was (as you surely know) written by J.K Rowling, and whatever her more fervent fans may say in her defense, the most popular author in the world has never been much of a stylist. She is, clearly, trying to do better, and every so often she hits the mark, as in this description of an insincere polite conversation: "They slid stock words and phrases back and forth between them like beads on an abacus." Plus, you have to be impressed with what a radical departure from the Harry Potter series this novel constitutes. It is rigorously, blackly realistic and committed to a merciless and sardonic scrutiny of human nature. It refuses utterly to offer the comforting narrative conventions of heroism, a clear-cut distinction between good and evil and the promise of redemption.

Rowling, however, is most definitely a masterful storyteller, and within several chapters "The Casual Vacancy" locks into gear, emerging as an intricate yet smoothly propulsive engine that carries its reader on to its conclusion. The clunkiness of the prose evens out (are parts of the initial chapters a late, and therefore less thoroughly edited, addition?) and it becomes possible to latch onto the fates of a few of the less risible characters: an ineffectual but well-meaning guidance counselor, a horny teenage boy dazzled by a new classmate, the only intellectually average child in the village's Indian family, the struggling daughter of a junkie. Chances are none of these people will be deemed sufficiently "likable" by the pop-culture-coddled, uplift-craving audience that makes up a goodly portion of Rowling fandom. But hats off to her for not toning things down an iota in order to please them.

"The Casual Vacancy," despite its wobbly beginning, evolves into a scorching satire, an attack on the middle-class complacency and indifference that would see Britain's social welfare infrastructure dismantled. (Rowling — who, as a single mom, was once supported by that system — knows its value better than anyone.) Some council members in the novel's pretty little West Country village of Pagford want to cut loose the downscale segment of their polity — a ramshackle housing project and the addiction center that serves it. Barry Fairbrother, the council member who dies in the novel's first pages and (despite his absence) the most wholly admirable person in the book, was the only effective opponent of this plan.

A.S. Byatt once charged Rowling with writing children's fantasy that lacked "the shiver of the sublime." Byatt was right about that: For all its magical high jinks, the strongest parts of the Harry Potter saga are its social comedy, its depiction of everyday life and its travails, albeit infused with wizardly whimsy. The series is remarkably unmythic in its resonance. The proof of that lies in the magnificence of Rowling's villains — not the boogeyman of Voldemort, who's more of a plot device than anything else, but the more earthly dastards, like Dolores Umbridge, that primly sadistic Voldemort apparatchik and those sneering climbers, the Malfoys. "The Casual Vacancy" abounds in such figures, and long before you become invested in what fragile tendrils of decency survive in Pagford, the desire to see these awful people brought down is more than enough to transform the novel into a page-turner.

There's the bored, aging, blowsy wife of the conservative council candidate, who is locked in an implacable battle with her mother-in-law, a collector of porcelain commemorating the royal family and vicious gossip about her neighbors. Just watching those two duke it out is worth the price of admission. There's also the adolescent schoolboy intoxicated by his own sub-Nietzschean "authenticity" and feasting ghoulishly on the discomfort he causes to the less "fearless" souls around him. And there's the violent, tyrannical father of the isolated family up on the hill, whose home life becomes one of the most vivid fictional forays into the dynamics of domestic abuse I've ever read.

But if Rowling is ferocious in her depiction of everyday tyrants, she does not sanctify their victims. Terri Weedon is the addicted mother of Krystal, a 16-year-old who serves as the emblem of everything the affluent Pagfordians don't want in their children's classrooms. Rowling presents her in all her self-justifying, impotent rage and stupidity, even if she insists on recounting exactly how the woman came to be so utterly broken. Krystal herself, though still redeemable, is also crude and violent. Even the magnanimous Barry, it turns out, left behind a dissatisfied wife.

"The Casual Vacancy" is an unforgiving novel. With it Rowling summons her formidable narrative skills to issue an indictment of contemporary British society, for which the provincial Pagford stands. It is fueled by anger and its final scenes have a genuine, admonitory thunder. It is not the sort of book that hordes of people would choose to read if its author had not also written a far more comforting series of stratospheric bestsellers. But perhaps the world will be better for them reading it. Rowling may not be an easy woman, but she uses her powers for good.