When the dogs won't eat the dog food 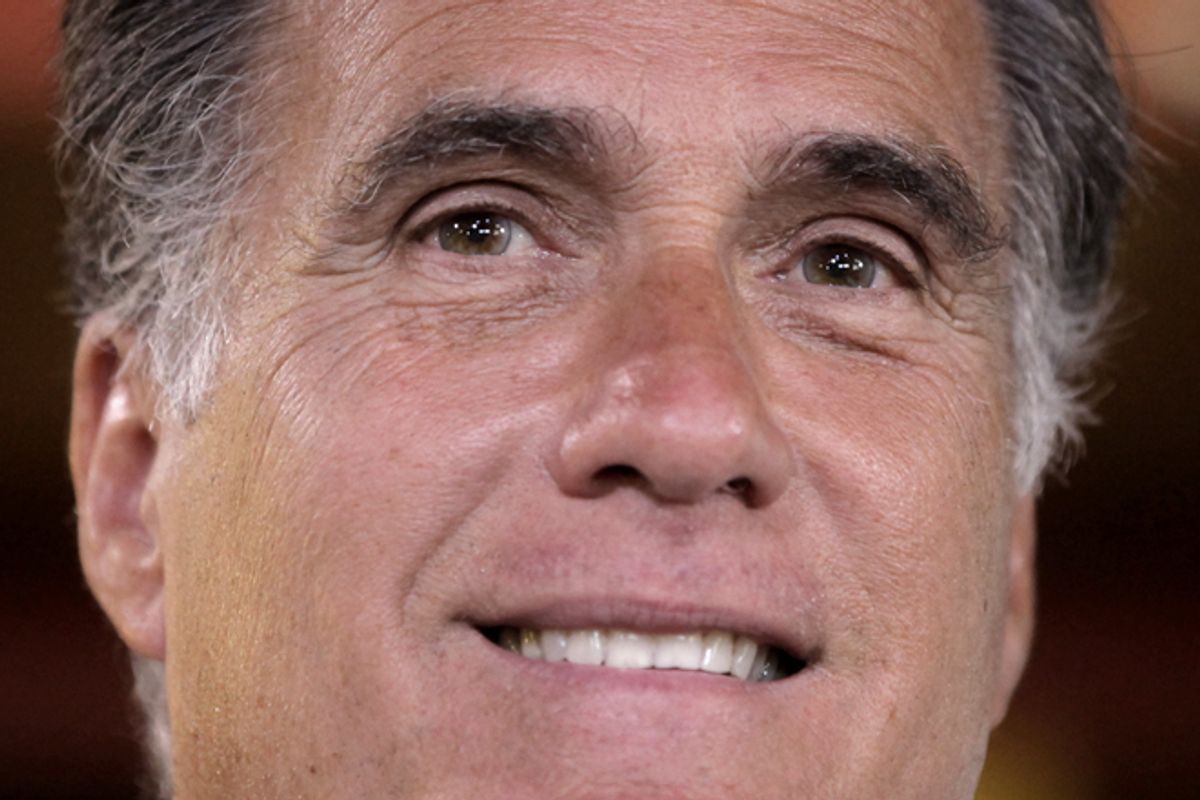 I know, "the dogs won't eat the dog food" is kind of a cliché, but maybe because of Mitt Romney's Seamus I couldn't resist it. It refers to attempts to blame marketing for a product not selling, when the problem is the product itself. Romney is the product the voters aren't buying – the dog food, if you will.

Journalists and political operatives are already engaged in a pre-mortem about Romney's awful campaign, and what killed it: The never-ending tax controversy? Bain job-killing? His Olympics stumble? A mediocre convention? Bad judgment in slamming the president on Libya? Those remarks about the "47 percent"? Politico came out and told the truth today: "In the end, it's Mitt."

Mostly anonymous Republicans (such courage) dish the dirt on the candidate they say they love. The silliest thing in the Politico piece came from an anonymous "top Romney official" who called Romney a "lousy candidate" who's "highly qualified to be president." Actually, in our country, sir (it's almost certainly a "sir"), voters decide who's highly qualified to be president. And they're not sold on Romney.

Let's be clear, though: Romney can still win. Our country is divided. The swing voters coming over to President Obama's column – including seniors and the white working class – could swing back to the GOP, if not to Romney personally, in the event of a major crisis or something else unforeseen. Everyone's saying the debates are a make or break moment for Romney, and it's true, I guess, that a great performance might change the narrative, at least. (In the media, anyway; I'm not sure anything but a spectacular Obama stumble would make the debates decide the election.) So Mitt's supporters have a lot of advice, some of it crazy.

Peggy Noonan thinks he should tout Romneycare. Ahem. She also suggests he should challenge Obama, because the president isn't used to being challenged – this about a man who was heckled in congressional chambers and the Rose Garden, and forced to show his long-form birth certificate by the ridiculous Donald Trump.

Newt Gingrich says Romney should "use humor" – this to a man whose idea of humor is to insult NASCAR fans about their rainwear (no wonder Obama is supposedly ahead with NASCAR fans, once a euphemism for Republican white guys).

Charles Krauthammer, who has periodically thrown up his hands in despair at Romney's incompetence, urges him to "Go large" -- this to a man who went large with his V.P. pick, right-wing Tea Party poster-boy Paul Ryan, then got very small again by muzzling him.

That's ridiculous, even if "let Candidate X be himself" is a bigger cliche than dogs not eating dog food.  Romney was being himself at that $50,000 a head fundraiser, and he revealed himself to be a heartless plutocrat. Voters don't want to see any more of that.

In the end I think Romney killed his own campaign, not because he's a bad person – he may be – but because, in addition to his ineptness, he came to symbolize what's wrong with our economy, in every way. The tax rate he pays is a scandal. Shoveling millions of tax-free dollars to his sons is, too. Bain Capital was no job creator (unless you count Bain execs); the firm borrowed money to buy companies, saddled the companies with their debt and made huge fees, whether or not the firm survived.

I said long ago that Romney "is the poster boy for the top 1 percent," and that it would hurt him with struggling voters. But I didn't know how much it would hurt him. In the end, maybe he'd have survived coming off like a cross between Thurston Howell III and Montgomery Burns, if we hadn't heard his remarks about "the 47 percent." Together, his sheltered wealth, high finance career and plutocrat's sneer are making it nearly impossible for him to be elected.

Nearly impossible. Not impossible. The other side has so much money and so few scruples these last six weeks could get uglier. We don't know the toll voter suppression laws will take. And forget about those newfangled laws, there's old-fashioned GOP voter suppression – robocalls and fliers giving voters the wrong day as Election Day or changing their polling place, voter intimidation, or a shortage of ballots or voting machine in dense Democratic districts.

But for now, Mitt Romney is in a deep hole, and he's got no choice but to keep digging, until Election Day. Seamus jokes aside, if the dogs don't eat the dog food, the product disappears. Paul Ryan seems to be campaigning harder for his House seat. I'm not sure what Romney does after November if the job he's been pursuing for arguably a decade eludes him.