Can anyone save the GOP?

After Mitt, Republicans will need a sane leader to drag them back to reality. Problem is, they don't do sane 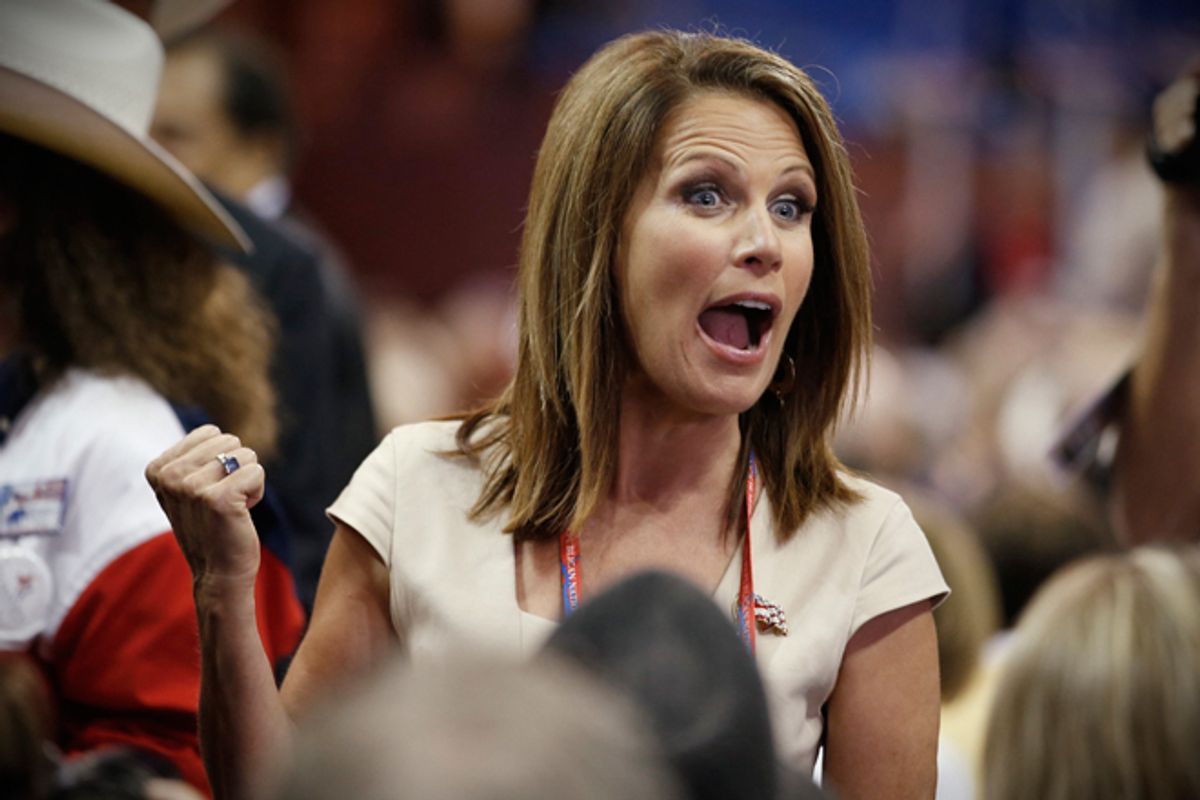 Could the Republican Party face an impossible Catch-22 when it comes to excising the crazy from their party? This is a party, after all, that has numerous candidates who are running for office on a platform of ending the direct election of senators. It's a party whose most prominent voice in the media goes around calling women “sluts,” and one with a Senate candidate who talks nonsense about the biology of rape. Most notably, it's a party with a presidential candidate who simply parrots back the party’s conventional wisdom (47 percent!) -- and who sounds totally out of touch and not a little insulting to most voters. So what’s next?

Indeed, with Mitt Romney falling behind in the polls, there’s been a fair amount of speculation this week about the effects of a Romney loss on the Republican Party. The Hotline’s Reid Wilson concluded, for example, that "the fallout from a Romney loss has the potential to reverberate through the Republican Party for a decade" by pushing the GOP further and further away from moderate, voter-friendly positions.

It's possible, but Wilson doesn't mention the most obvious counterexample: George W. Bush. Should Barack Obama win, 2012 won't look all that different than 1996, after all. A Democrat is elected president in the wake of a recession. Republicans storm back with a midterm landslide. The subsequent Republican Congress turns out to be terribly unpopular. The GOP nominates for president a "next in line" candidate whom movement conservatives neither love nor respect but who appears to be more electable than those they do get excited about. And then they lose anyway.

The result in 2000 wasn't that they turned to a "real" conservative; instead, they went with Bush, who basically ran as a moderate — or at least a moderate who supported really, really big tax cuts. That's the side of the equation that conservative writer Dan Larison emphasizes, and I think he has a good argument.

On the other hand, I might want to distinguish here between the short term and the long term. In the short term, there's both logic in the idea that parties tend to grow more moderate the longer they are out of power and empirical evidence that it actually happens. Note that the biggest ideological outliers nominated in the last 60 years – Barry Goldwater, George McGovern and Ronald Reagan – were all selected by parties only four years removed from the White House. Parties in longer exiles, by contrast, have nominated relatively moderate figures such as Dwight Eisenhower, the 1968 version of Richard Nixon, Jimmy Carter, Bill Clinton, and the 2000 version of George W. Bush.

But does that seem likely of these Republicans? Many of us argue that there’s something really wrong with the current GOP. It’s not that it’s conservative; it’s that, well, to be blunt, it’s nuts. Or, to put it more gently, it’s that there are strong incentives for being dysfunctional, such as the profit motive for those who stand to make a lot of money from the party being out of office (when talk show ratings go up and wacky conspiracy theory books about Democratic presidents sell like hotcakes).

The result is a party more hospitable to, say, Sarah Palin than to Richard Lugar. And a party which takes presidential candidates such as Michele Bachmann, Newt Gingrich and Herman Cain at least somewhat seriously. That is, it's a party which frequently ignores reality and rejects the normal compromises of the U.S. political system. And every candidate the GOP nominates either shares in the crazy or is hostage to it – which is what we’ve seen from Mitt Romney throughout the campaign.

If all of that is true, then the question becomes how to fix it. It could happen, presumably, if party actors decide to reject it — or, at least, if enough do that they can win an internal struggle over it. But in my view, that scenario, while possible, is extremely unlikely.

Far more likely, I'd say, is a successful GOP president who considers it part of his or her job to bring the party back to reality by marginalizing the crazy – the obvious precedent would be Eisenhower (slowly, but eventually) helping to take down Joe McCarthy.

At which point, you might be saying: Catch-22. If the best bet is a president who will fight the crazy, but a president cannot be nominated without it, then how do you get from here to there? And, alas, I don’t really have an answer to that. Perhaps you get lucky and a president is elected within that system who manages to get popular enough in office to fight back against it. Perhaps two or three terms out of the White House gets GOP politicians desperate enough to seek out someone not beholden to those portions of the party and to fight hard to secure him or her the nomination. Perhaps another Ike comes along, although you could wait an awful long time for that.

Until that happens -- until something happens to remove or at least moderate the real problems within the GOP -- it's pretty likely, it seems to me, that whatever they do in the presidential nomination process, the winner is going to be essentially held hostage to the crazy. And not only is that going to be a disadvantage in the general election, but if he or she does manage to win – and the electoral effects of extremism are not large enough to prevent that in many cases – it’s going to be difficult for such a candidate to govern successfully. And there’s no obvious way to get out of it.