I broke up with my life coach

She was sweet and grandmotherly and told me I'd find love. Instead, I found myself in a dysfunctional relationship 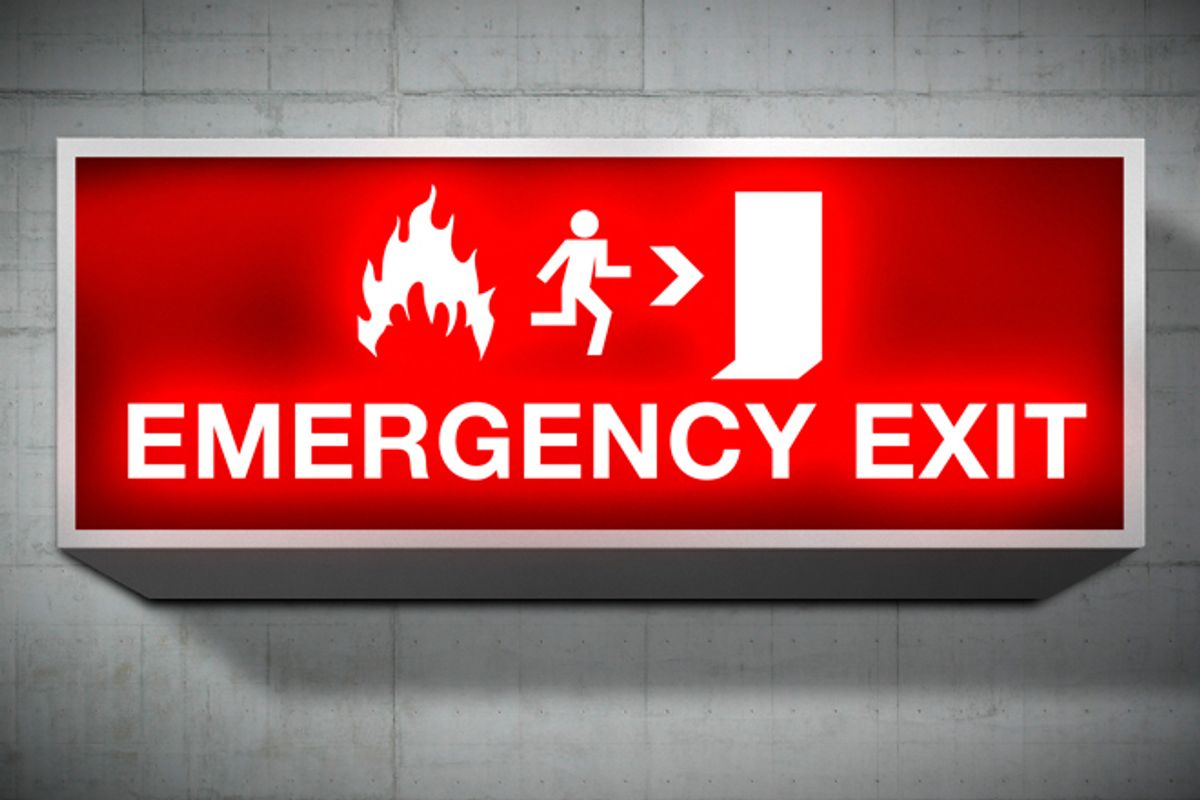 I had stopped going to therapy in the spring. But by late August, my luck had turned. Specifically, my dating luck, which started to go bad with the breakup of my first real relationship at age 36, and was followed by a series of unsuccessful dates. The whole rotten season culminated in a cringe-inducing text message from a guy I’d just met that started with “I have an indecent proposal for you,” and ended with, “Here's looking at you, kid.” Talk about a gross misuse of  “Casablanca.”

But the beginning of fall always made me feel ungrounded. I traced my anxiety back to my teens, when my father committed suicide on Yom Kippur. If there was a recipe to create an anxious person, my parents must have followed it: I was the only child of a depressed father and a mother who lived through the Holocaust.  As an adult, I became a workaholic, traveling the world, and avoiding any deep romantic connections for fear a man would leave me like my father did. At least that’s what therapy taught me. I needed her help again.

But as luck would have it, my psychologist, like most New York City shrinks, was on vacation, which did nothing to quiet my hyperactive, over-anxious preoccupied mind. So I took matters into my own hands. After hours of googling “how to change your life,” I found reviews for an online book that was sort of like “The Secret,” if that book had been written by a Jewish mother who ladles chicken soup into your mouth. Intrigued, I emailed the author, a life coach, for a consultation. She was down-to-earth and funny, and also (not mentioned in her bio) an Orthodox Jew, so I called her Yenta, because she reminded me of something out of a Barbra Streisand movie. Maybe I had been searching for help in the wrong places all along.

It had been a long time since I’d gone to temple, and I was skeptical that someone deeply religious could guide me through the tough world of urban dating. But Yenta had such a soothing voice, warm and nourishing. She didn’t want to analyze me, but instead gave me practical advice on how to turn around my life. Talking to her made me feel like everything was going to be OK. Plus, at $75 a pop, she was half the price of my old therapist and came with weekly phone sessions (so I didn’t actually have to meet her in person) and unlimited email access — a real mental health bargain.

On our first call, I told Yenta what I was really looking for: love. I felt like I’d been running in circles my entire romantic life, and by putting off intimacy for so many years, I had a deep-down fear that I would end up alone.

As it turned out, Yenta met her husband later in life and had slogged through many bad dates as a non-religious Jew before she turned Orthodox. All it would take, she said, was a change in perspective. I liked the confidence in her voice. I liked her calm assurance. I was sold.

Her first suggestion was to go to an event I will call “Mazel Tov Mondays” at one of the biggest temples in the city for “coffee, cake, and Torah study.” Unofficially, it was New York’s most serious Jewish singles night.

Yenta sensed the hesitation in my voice. The event felt too religious for me, definitely out of my J-Date comfort zone.

“How do you know if you haven't tried it? You know the first rule: Try something new, you have nothing to lose,” Yenta sang. She was right.  My goal was to meet the right person, and it was one night of my life.

A week later, I waited outside the temple wavering.  Just as I was about to leave, a woman in her late 30s, with dark hair and eyes, tapped me on the shoulder.

“Please come in,” she said, hand on my arm. “If you want, talk to me or that woman over there. We’re matchmakers for the event. We have many good men here,” she whispered.  She handed me her card, her arm extending out past an older man in his late 50s, frantically eating a bagel, with a schmear of cream cheese caught in his mustache.

“Take a seat. It's someone new. Smile!” said the singles coordinator, taking a quick photo. Before I knew it, I had my own “Mazel Tov Mondays” mug shot.

“We need to take down your information,” said the bagel-eating guy. “Weight? Men want to know what they’re getting. You should put it down here.”

I couldn’t believe they asked me that. Weren’t all Jews on Weight Watchers?

“Are you a looking for a Kohen?” a woman asked.

“You know, to marry a Kohen,” she said, meaning a descendant of biblical Aaron. This woman meant business. “If so, you can only have done it with other Jews.” As she said those last words, she rounded one hand into a hole and put her index finger in it, the fourth grade sex sign.

A rocket ship couldn't have gotten me out of there fast enough. “Will you excuse me, please?” I said, backing away and desperate to get out of there. I pushed open the door, which I realized too late had an enormous sign attached that said, “Do not exit or alarm will sound.”

It was true to its word.

“Didn't you read the sign?” yelled the security guard, pulling out his walkie-talkie as bells rang loudly through the whole building. It was the week before Yom Kippur at one of the biggest temples in the city.

When I got home I found a homemade bag of pastries with a note waiting in my mailbox. “Can’t wait to dance at your wedding. XOXO.” They were from Yenta. I already had one Jewish mother.  Now, apparently, I had two. I dreaded our next phone session scheduled for the following morning.

“Did you get my package?” Yenta said.

“I did. It was so nice of you, but I'm trying to watch my weight, so ...” I trailed off. I had spent two years losing 40 pounds and a mail-order Yenta wasn’t changing that.

“How was the event?” Yenta asked, just as the phone beeped. Thank God!

“Do you mind if I call you back?” I said, never so happy to see my real mother's number on the screen.

A few hours later she replied.

“Your email blew me away! With your permission, I'll send it to a Jewish publication for their New Year's edition. Maybe one of the readers knows a secular man in New York, another luck strategy,” she wrote. I scanned the attachment.

“Danielle entered the building with an open mind and heart,” it read, “and a search to find her soul mate. Just in case God didn’t know she was there (of course He did), she sounded out the alarm:  ‘I’m here.  I’m open. I’m looking!  Please help me find my husband!’  Bravo, Danielle. You rock, girl. Sound out the sirens, leave no stone unturned. I’m sure he is searching for you.”

I was horrified, but also weirdly touched that Yenta would submit my story to what was basically “Jewish People Magazine: High Holidays Edition.”

An hour later she called me.

“We got accepted by the magazine — their lead story fell through,” she said. “Talk about changing your luck. Someday, this will make a good story for you, I know it.”

Yenta was stressing me out. It was becoming increasingly clear she was not a good match for me, either.

“I can't thank you enough for being there when I reached out,” my next email read. “You've got the touch on great advice.  But the thing is, I have a Jewish mother already, she just doesn’t cook. And I know you meant well with the cookies and the article but I need some boundaries.”

“I had no idea until now that my personal affection and dedication was making you uncomfortable. I thought that you felt cared for, and it was good for you.”

Overcome with massive guilt, I did the only thing I could to get Yenta off my back: offer her a $25-a-session raise.

I turned to my best friend Andrea for help. She was a lifelong New Yorker, and perhaps the only person who could understand how, instead of finding a new boyfriend, I ended up in a relationship with Yenta.

Andrea was right. It was time to break up with Yenta.  Perhaps because of my father’s death, closing the book on people was something I didn’t like to do and I was scared of. Now I was learning the most valuable dating lesson of all: When it’s over, get out. From this experience, one thing was for sure: While I might have needed a new relationship, it definitely wasn’t with Yenta.

“Upon further thought, I won’t be needing your services anymore,” I typed.

That was not the end of Yenta. She asked for a reference so I wrote her a review, hoping it would end the relationship on a good note. But she kept emailing and calling. I stopped responding, resorting to the lowest class of dating behavior: radio silence.  Just knowing she was out there made me even more anxious. I quickly made an appointment with my therapist, who I missed desperately, for the day she returned back to town.

“How was your summer? It’s been a while,” she asked.

“Good,” I said, guilt compounded, revealing nothing about seeing Yenta, as though I had been cheating on her.

“Maybe you needed some time away to figure things out on your own,” she said.

And that was it.  For so long, anxiety and fear pushed me to listen to anyone but myself for answers about my own life, especially during times of stress. I listened to Yenta, to my friends, to the outside world. But maybe, if I stopped for a minute, and sat with those feelings, they too would pass, and I could trust myself.

It was time for me to listen to my own voice.

Danielle Gelfand is a writer and an executive producer at VH1.