When I finally saw my blood

As Kelly reports from Syria, I'm taking care of our child, pouring another glass of wine and wondering: Is this it? 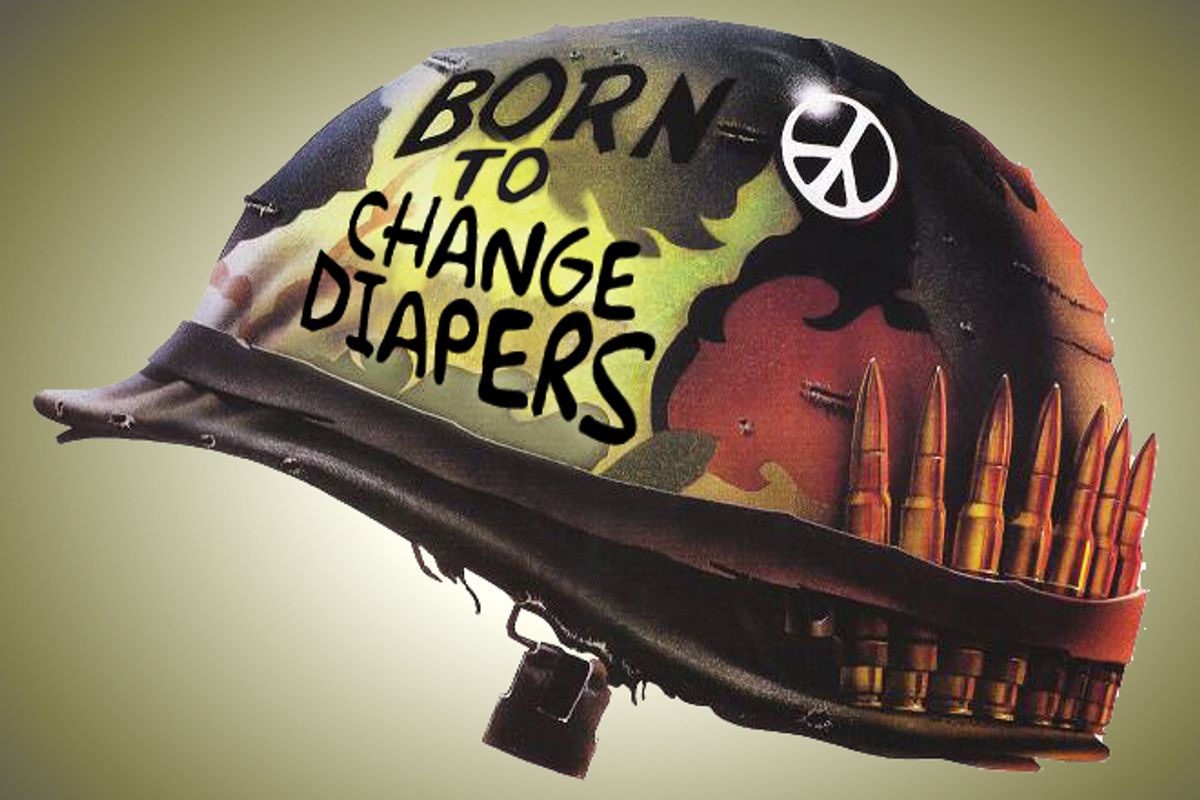 I'd lived in Beirut for nearly a year -- next to the mess in Syria, where more than 20,000 people had so far been killed; an hour or two from borders my wife crossed to find out why; and where, for a variety of reasons, I still had trouble explaining my own stake in all this -- when, in the kitchen the other night, I finally saw my own blood.

Before Beirut, we had lived in Turkey and Iraq, the latter of which was my wife Kelly's base. (She’s a correspondent for NPR.) Those weren't fun times, spending so many months apart. Among other problems, it was difficult to be a man, changing diapers, while my wife swash-buckled her way across Mesopotamia. With the mother of our daughter based in Baghdad, I learned how to excel at various domestic chores and also how to worry. What would happen if a mortar fell or if bad guys tested the glass on her armored truck? What would people think of a blonde woman traveling to Anbar Province? The Middle East, for my wife, was the big league. For me, it was a place to find a good doctor and maybe some daycare. Alone on a Friday night, I'd pour myself another glass and wonder: Was this it?

By the time of our next posting, in the beautiful but sometimes unbearable Beirut, we'd decided to change some things. For instance, we would spend a lot more time together. Also, I wouldn't be changing diapers because our daughter was old enough for school. So we found an apartment in an old house, bought a bunch of furniture and hired a carpenter to make shelves. We were almost ready to host our first dinner party when things really began to unravel in Syria. The Syrian government was slaughtering its own people and peaceful protests were giving way to an armed resistance.

Candles sat unlit on our dining room table, and my wife worked 18-hour days. She encountered photos of a little boy with his head cut by army shrapnel and heard reports of other boys being tortured to death, their bodies returned to their families for all to see. Then she learned about entire villages of people who'd been slaughtered, some of them with their throats slit. The worst was when a contact would call, begging for help, and then his line would go dark. My wife slept less and less, and the circles under her eyes deepened.

Last December, the violence seemed to be creeping closer. First, we learned a friend was missing. We determined the wife and baby were OK, but he was gone -- killed by a fall during a mountain climb. Friends in mourning gathered at their apartment, where I'd just had Thanksgiving dinner. With dim recognition, I watched his wife standing there, looking lost, holding their son.

A few weeks later, New York Times reporter Anthony Shadid had trouble breathing during a rugged crossing from Syria. He reportedly suffered an asthma attack and then perhaps had a heart attack and then he was dead. At the memorial in a Beirut chapel, I sat in back and cried when I saw his son and wife. I left early to put our daughter to sleep because Kelly was out of town, well above sea level herself, in the capital of Yemen, reporting on that country's slow lurch out of authoritarian rule. I hoped her own asthma wouldn't flare up.

Then it was a woman: Marie Colvin, the Times of London legend, whom Kelly and I had met together at a bar in Beirut. Marie shook my hand and wished me the best. "Whom do you work for?" she asked. "Myself," I said, and we clinked glasses and she called my wife the new principessa, whatever that meant. In reality, my wife sort of looked like Marie, and I suppose they were alike in some ways, though Marie had no children. Her legacy was her career; in Sri Lanka, she'd lost an eye following the fighting, and in its place she wore a black patch. Later, I dreamt Kelly was ordering one, too.

Marie was gone, her body buried for a time in a shallow garden grave in Syria. She'd always be remembered for her courage, admirers wrote. The photos of her death were ghastly, and I couldn't look. How could I? A blonde woman dead in Syria? Kelly continued to cover the growing conflict, and she traveled to Iraq and Yemen. Her stories earned much praise. I worried, of course, but I was also proud.

One night, Kelly and I were hosting her company's security adviser. We sat on our balcony after dinner, drinking Lebanese wine, and then we started hearing pops, like fireworks. "That must be someone celebrating," I joked. Then we heard many more pops, and it became clear these weren't fireworks but rather someone shooting. "Hah, hah", I said, "it must be happy shots, like after an important soccer match." But the firing grew more insistent, then constant, then deafening, and we retreated inside. Through our windows, we saw soldiers pulling up in armored personnel carriers. They took firing positions on our front steps. I found that my right eye would not stop twitching. Then I slipped into our bedroom and attempted to drink until I felt calm or at least fell asleep. My wife and her adviser, meanwhile, rushed out the door with a press pass. Over the next seven hours, I slipped in and out of a stupor, taking care to see that our daughter remained asleep. I was relieved when my wife finally came home.

Early the next morning, dazed but also kind of thrilled, we watched the troops pull away, the skirmish revealed for what it was -- a relatively loud but contained criminal affair -- and then our little girl was awake, running around in her pajamas. "That's a really big truck!" she said, pointing at an APC.

It should've been jarring, to have the military on our block. Yet somehow it wasn't. Even with its arrival literally on our doorstep, a little bit of violence hadn't altered our essential calculus, which had been ratified by the adviser and, by implication, the company: We were here, this was our life and the risks were worth it.

The weather warmed, summer came and went, and the flowers on our balcony bloomed. It was late August, our daughter was excited for her first day of school and at dusk we could almost turn off the fan. We went to the beach, signed the girl up for swimming lessons and sketched out plans for that long-delayed party.

Dinner that night was minestrone with pesto, which was lovely, and one of my favorites. But it needed cheese. So I eyed a block of Parmesan and grabbed our biggest knife. Shifting my weight, intent on a clean cut, I was momentarily distracted, and the blade slipped, slicing through my thumb -- a shock, how easily it fell through fingernail and skin -- and the path was so clean, nearly out the other side, that I was actually, even as the blood began to flow, for a moment, proud of how sharp I had kept our knives.

I held up the thumb, blood streaming down my arm, shocked by the reality of the pain. This is how it feels! It was funny: All that worrying about danger, and I, the guy who mostly worked at home or in a cafe, was the first to bleed.

And yet, and I couldn't help it, I began to howl. It was a low, animal wail -- a welling up of anger and sadness. Anger about a world that made me worry for our safety in the first place, and sadness because I could never worry enough. (And frustration because so much has been said about my wife's job -- but what about mine?)

So my thumb bled, and my daughter grabbed my leg, my wife dropped the soup ladle, and I ran to our bathroom for a bandage and ointment. I stared at myself in the mirror, maybe a little embarrassed. My wife was readying for a new trip, and all I'd gotten was a kitchen cut. I looked at a reflection of a man holding his arm in the air, hand wrapped in a bloody towel. Then I walked into the kitchen, grabbed a bowl of soup, and among the flowers of our life in Beirut, I took my seat at the table.

Nathan Deuel is an M.F.A. candidate at the University of Tampa. His last essay for Salon was about the death of his father, and he's also written for The Paris Review, Slate, The Awl, and Los Angeles Review of Books, among others. Previously, he was an editor at Rolling Stone and the Village Voice.