Wave of bombs kills 26 in Iraq

The coordinated attacks a rallying call by al-Qaida, said one official 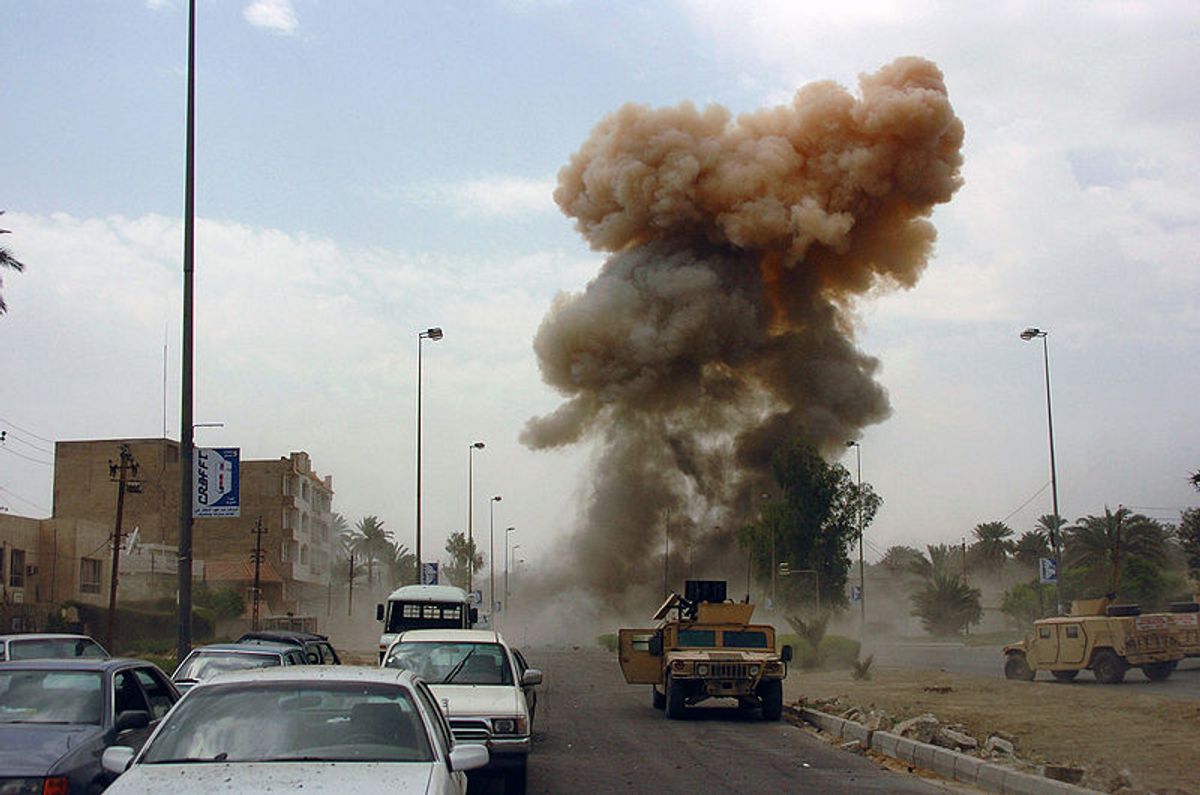 BAGHDAD — A series of coordinated bombings shattered Shiite neighborhoods and struck at Iraqi security forces Sunday, killing at least 26 in attacks that one official described as a rallying call by al-Qaida just days after dozens of militants escaped from prison.

The blasts brought September's death toll from sectarian violence to nearly 200 people — a grim, above-average monthly total for the period since U.S. troops left last year. The steady pace of attacks has worked to undermine confidence in the government.

"The people are fed up with the killings in Iraqi cities," said Ammar Abbas, 45, a Shiite and government employee who lives in a Baghdad neighborhood near one of the bombings. "The government officials should feel shame for letting their people die at the hands of terrorists."

Police said the wave of explosions stretched from the restive but oil-rich city of Kirkuk in the north to the southern Shiite town of Kut, wounding at least 94 people. There was no immediate claim of responsibility for the attacks, but bombings are a hallmark of al-Qaida in Iraq, the Sunni insurgency that has been struggling for years to goad Shiite militias back toward civil war.

A key Shiite lawmaker said the bombings likely sought to galvanize al-Qaida in the wake of a prison break last Friday in Saddam Hussein's northern hometown of Tikrit. Scores of inmates escaped — including as many as 47 convicted al-Qaida militants — in a massive security lapse that the government acknowledged had help from inside.

"Al-Qaida leaders have no intention of leaving this country or letting Iraqis live in peace," said Hakim al-Zamili, a Shiite member of parliament's security committee. "The jailbreak in Tikrit has boosted al-Qaida's morale in Iraq and thus we should expect more attacks in the near future."

"The situation in Iraq is still unstable," al-Zamili added. "And repetition of such attacks shows that our security forces are still unqualified to deal with the terrorists."

Spokesmen for the government and Baghdad's military command could not immediately be reached for comment.

Sunday's deadliest attack struck the town of Taji, a former al-Qaida stronghold just north of Baghdad. Police said three explosive-rigged cars in a Shiite neighborhood went off within minutes of each other, killing eight and wounding 28 in back-to-back blasts that began around 7:15 a.m.

At almost the same time, in Baghdad, police said a suicide bomber set off his explosives-packed car in the northwest Shiite neighborhood of Shula. One person was killed and seven wounded. Police could not immediately identify the target.

"So many people were hurt. A leg of a person was amputated," lamented Shula resident Naeem Frieh. "What have those innocent people done to deserve this?"

The chain reaction of blasts continued throughout the morning, petering off around noon.

And car bombs exploded outside the northern city of Kirkuk, the northeastern towns of Balad Ruz and Khan Bani Saad in Diyala province, and in the town of Madain outside Baghdad. In all, seven people were killed.

Also in Baghdad, a double car bomb struck the mostly Shiite neighborhood of Karradah in the most recent episode of an all-too-familiar insurgent tactic. The first explosion came as a security patrol passed, killing a police officer and a bystander, and wounding eight other people. As emergency responders rushed to the scene, the second car blew up, killing three passers-by and injuring 12, according to officials.

An Associated Press cameraman was knocked to the ground in the second explosion and an AP photographer was slightly injured.

All of the casualties were confirmed by Iraqi security and health officials who spoke on condition of anonymity because they were not allowed to release the information.

Earlier this summer, the Iraqi wing of al-Qaida, also called the Islamic State of Iraq, launched a campaign dubbed "Breaking the Walls," which aimed at retaking strongholds from which it was driven by the American military after sectarian fighting peaked in 2007.

The insurgent group has for years had a hot-and-cold relationship with the global terror network's leadership. Both shared the goal of targeting the U.S. military in Iraq and, to an extent, undermining the Shiite government that replaced Saddam Hussein's regime. But al-Qaida leaders Osama bin Laden and Ayman al-Zawahri distanced themselves from the Iraqi militants in 2007 for also killing Iraqi civilians instead of focusing on Western targets.

But even before U.S. troops withdrew last December, the insurgency sought to taunt Shiite militias and undermine Iraq's beleaguered Shiite-led government through near-monthly spectacular attacks that usually came on the same day in different places across the country, leaving scores of Shiites and security forces dead.

So far this year, the deadly trend has continued. January was Iraq's bloodiest month since the withdrawal, with 255 people killed in sectarian-related attacks. At least 193 people were killed in September. Deaths hit a relative low in May, with 48 killed, according to an Associated Press count.

"Such attacks waged on almost monthly basis show that the terrorist groups are still strong and they are not scattered or in chaos as depicted by the government," said Hadi Jalo, a political analyst in Baghdad. "It shows also that the failing security forces have not moved a step forward in their war against terrorism."