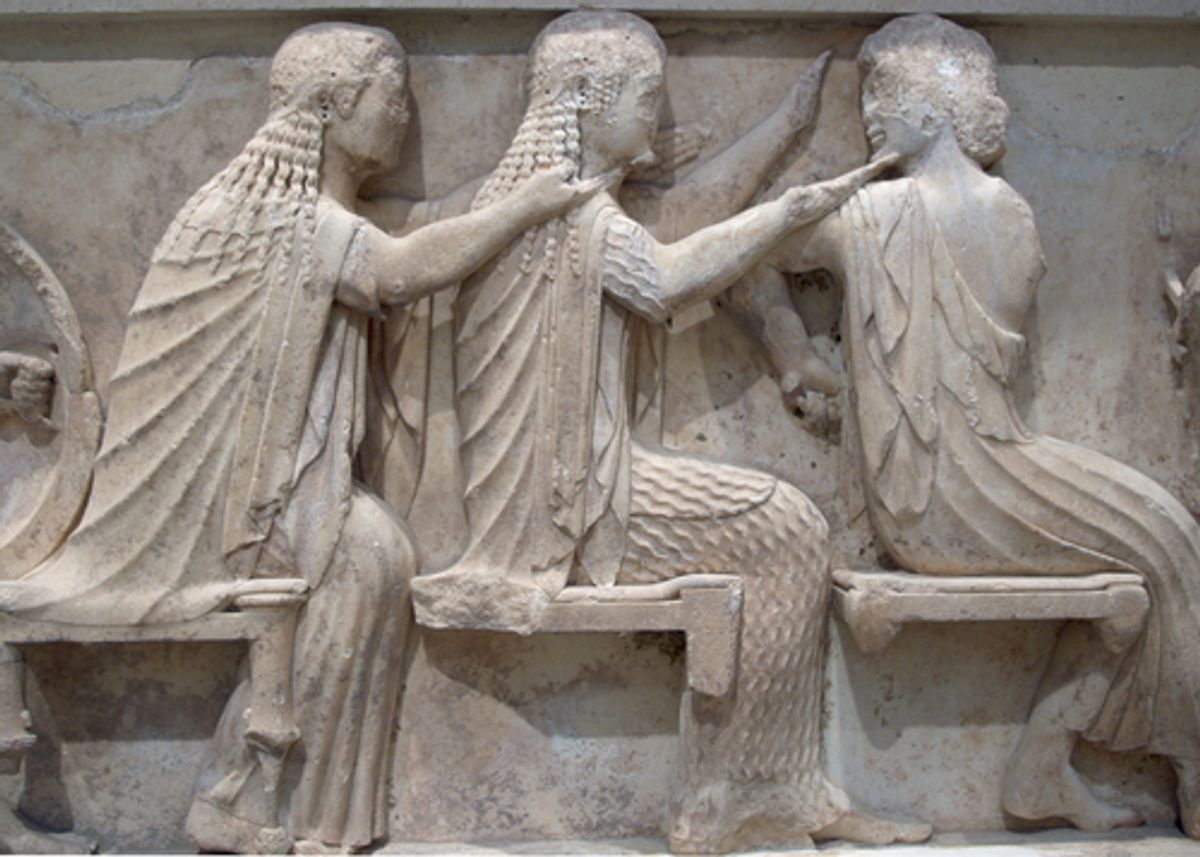 THE VIEW THAT ATHENS AND JERUSALEM represent two very different and antagonistic sources of Western civilization has long been a feature of the Western tradition. It dates back at least to Tertullian’s passionate second-century polemic against Greek philosophy. Those Enlightenment thinkers who preferred Greek reason to Hebrew revelation confirmed it resoundingly. And again just over a century ago, again from the side of Athens, the culture critic Matthew Arnold boiled down his civilization to two fundamental forces:

Today as well — arguably to the greatest extent since the Enlightenment — the camps of religion and culture view each other with a deepening mutual distrust.

It is no trivial matter then to deny the necessity of this antagonism, to claim that it is based on a tragic misunderstanding, and to suggest moreover that our culture’s health depends on overcoming it. An ambitious new work by the Biblical scholar and philosopher Dr. Yoram Hazony, The Philosophy of the Hebrew Scripture, makes this point audaciously, and would deserve consideration even if it achieved nothing more. In fact, perusing the footnotes, one discovers that almost every claim is precisely situated within the labyrinthine debates of contemporary scholarship. But it’s the invisibility of its erudition and the unabashed scope of its argument that gives the book its appeal.

Largely structured around the divisions of philosophy introduced by Aristotle, the work is an extensive, though unevenly convincing, introduction to the Bible read as reason. Its central thesis is that the Biblical authors, no less than Parmenides or Plato, pursued and cultivated a philosophical worldview embracing everything from metaphysics to politics. Hazony contends that the reason/revelation dichotomy — that is, the distinction between God-given truth and that truth which results from the independent labor of the mind — is irrevocably foreign to the Hebrew Scriptures. While explicitly opposing the Christian position, his reading is equally independent of the Jewish exegetical tradition. The Biblical text is approached as if for the first time, like some unfamiliar work of wisdom belonging to a previously unknown and exotic people.

After carrying out a minimalist reconstruction of the Biblical authors’ identities and intentions, what remains is just the text — a unified Hebrew Bible replete with inner-textual complexities and meanings. Hazony indentifies a number of prominent and recurrent literary devices whose descriptions he borrows from literary theory. Understanding the text’s deepest meanings is possible only by taking in the whole at once. “It is only later — sometimes much later,” he writes, “that the standpoint of the author about a given character or event comes to light.”

The story of Cain and Abel furnishes an important example with implications for Biblical ethics and politics. As here interpreted, the brothers represent the types of the farmer and the shepherd. Cain is usually remembered as the Bible’s first murderer and the founder of its first city. Nevertheless he began his days innocently as a faithful adherent of God’s injunction to Adam and his descendents to “serve the land” and to “live by the sweat of his brow.” The loyal, plodding Cain even made the first thanksgiving sacrifice to God, of produce, and did so apparently on his own initiative. His shepherding brother, Abel, rather than working the land himself as demanded of his father, employed his livestock for that purpose. And rather than living from the sweat of his brow, lived the free, unsettled life of the shepherd.

Yet Cain’s sacrifice famously pleases God not at all, while Abel’s is accepted. Hazony’s radical explanation of this scene informs much that comes later in the book. God, he argues, does not in fact always want obedience; on the contrary, God very often rewards open rebellion.

Here, as elsewhere in Scripture, it transpires that God is not particularly impressed with piety, with sacrifices, with doing what you are told to do and what your fathers did before you. He is not even that impressed with doing what you believe has been decreed by God. All these things, which Cain has on his side of the ledger […] are worth nothing if they are not placed in the service of a life that is directed toward the active pursuit of man’s true good.

Hazony identifies a Biblical preference for the shepherd and his untamed freedom of thought and action over the farmer’s settled ways — a preference that becomes increasingly sophisticated and subtle in later stories. For example, his reading of the story of Joseph (reminiscent of Thomas Mann’s epic), recurs to this theme. Joseph is a master of political economy whose greatest achievement involves the agricultural salvation of Egypt — a state in Roman times called the “world’s grain-bin.” This is to say that Joseph was a prince in a great farming empire. He does not win his father’s highest blessing, leadership of his brothers and the nation that will spring from them. He has faith — he trusts and obeys — but he lacks the shepherding virtues of independence and readiness to just rebellion.

The Bible’s preference for the shepherd holds a systematic significance, across the fields of ethics and politics. God is not exclusively concerned with blind obedience to his commandments. Faith is but one virtue among many. The shepherd’s innovation and freethinking liberty is ultimately preferable to the pious conservatism of the agrarian. God insists on:

examining one’s allegiances and obligations each time anew, each time from the vantage point of an outsider, a ‘stranger and sojourner’ (as Abraham calls himself after 62 years living in Canaan) who owes nothing and has committed to nothing that cannot be reconsidered in light of one’s independent judgment as to what is really right.

Hazony’s effort to show how revealed law fits his natural law model is too brief and not entirely convincing. But the insight into Biblical disobedience does not suffer for this weakness. Successful rebellion, against both God and man, appears throughout the Biblical corpus as a major reiterated theme. Contrasting a Biblical ethics of individualism with the moral centrality of the state in Greek philosophy yields the surprising conclusion that obedience is rather more a Greek than Hebrew virtue.

The chapter on the Bible’s political philosophy picks up this thread. If Plato and Aristotle were concerned chiefly with describing the best state, the Biblical authors were concerned with other, deeper problems as well: the problem of having a state at all, of controlling the dual human tendency toward anarchy and imperialism. They were concerned with national unity and division, and above all, with striving to maintain freedom without inviting wickedness. Considering Biblical episodes from the story of the tower of Babel to the prophets’ pleas before the people not to set a king above them, it becomes clear why both Hazony and Matthew Arnold identify statism with Greek rather than Biblical thought.

Yet despite their continued preference for the ethics of the shepherd, Hazony argues that the Biblical authors ultimately decide for a nation-state. The book of Judges describes the failure of the prophet-judges to rule over pre-state Israel, and is meant to show how a state became necessary in ancient Israel. In so doing, it provides a philosophical account of what makes a nation-state good. For instance, the Biblical state emerges as an essentially limited state – for the first time in history. It is a state seen through the shepherd’s eyes, subject to the prophets and the critical “word of God” in their mouths.

The biblical theory of knowledge presented is based chiefly on a reading of the book of Jeremiah and borrows heavily from pragmatism and Thomas Kuhn’s theory of paradigm shifts. Neither knowledge nor truth are mystical or absolute; they are rooted in imperfect and limited human experience and are confirmed, if at all, only in the fullness of time. The arguments here suffer at times from intellectual overextension, noticeable in the incongruity of Hazony’s philosophical vocabulary. Does Jeremiah’s insistence that societal corruption is reflected in the systematic misemployment of words really amount to “a critique of language”? Are the prophets’ impassioned harangues really “orations”? Such descriptions are not wrong, but they raise a great many unanswered questions. Yet here, too, are interesting and important ideas. There are stimulating observations on the nature and role of prophesy, on truth, on the imperfect nature of God, and on the notable absence in the Hebrew Bible of esoteric knowledge.

The thesis that the Bible can be read as a book of reason is at least partially convincing. And if, as Hazony claims, “the word of God is continuous with human wisdom,” there is no need to deny a special revelatory status to the Bible as well. Yet one does feel that something of the real difference between the Bible and Greek philosophy has been lost in translation. How is it that science and art belong so naturally to ancient Greece and yet seem quite foreign to ancient Jerusalem? Or that no wild-eyed prophets lamented the fall of Athens? This question receives no clear answer. Perhaps Matthew Arnold was wrong in thinking that the highest legacy of Athens is true thought and that of Jerusalem right action. But that hardly justifies the conclusion that those legacies are the same.

The Philosophy of Hebrew Scripture may not invalidate the ancient divide between Athens and Jerusalem, but it succeeds in the hardly more modest goal of reappraising the value and meaning of the Biblical legacy; one is left with a compelling new way of thinking about it. Hazony succeeds therefore in the most important way: by developing ideas destined for common currency.