Brown and Warren take off the gloves 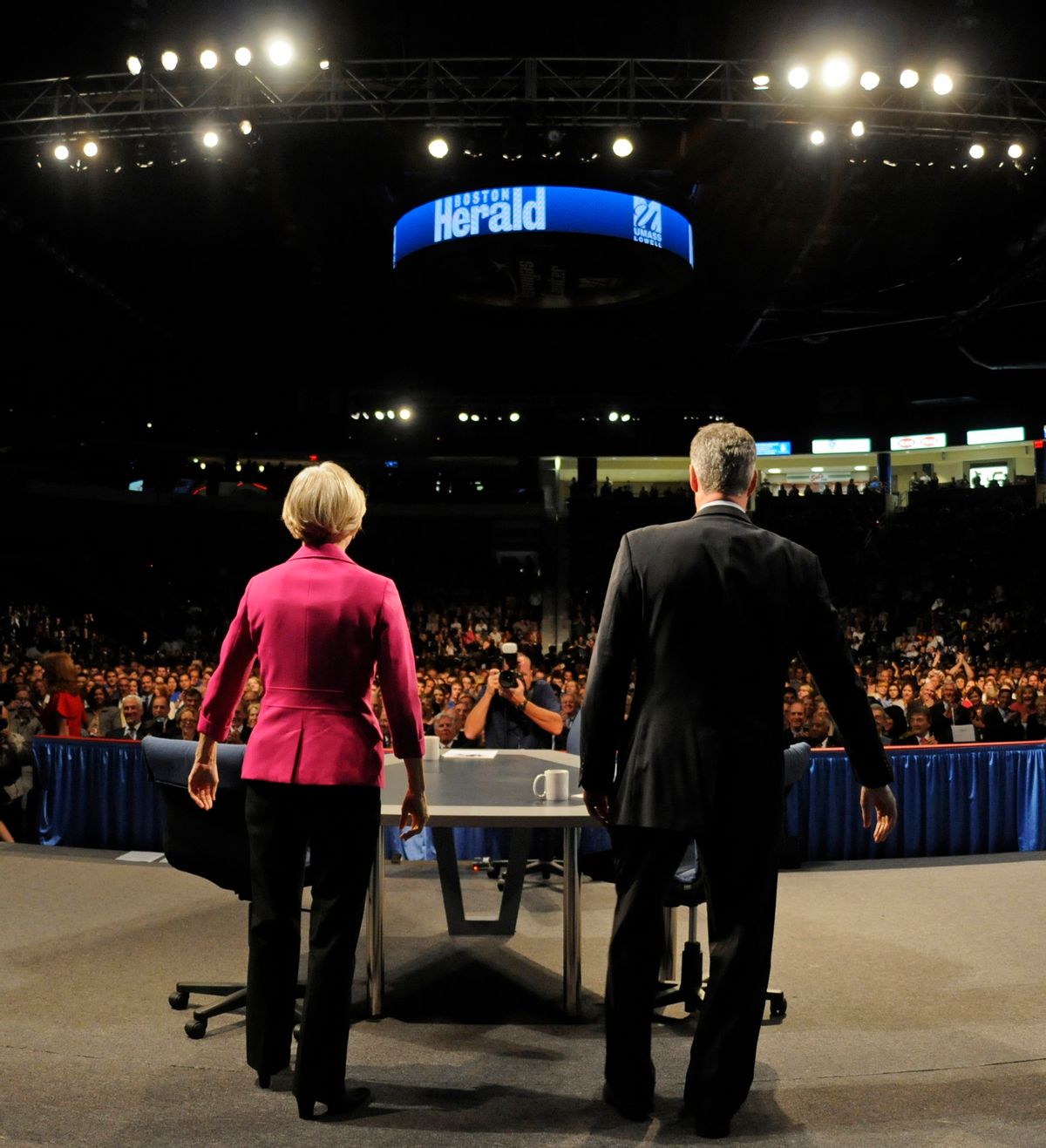 What a ruckus! NBC's David Gregory hosted the second debate between Massachusetts Senate candidates, sitting Republican Scott Brown and his Democratic challenger, Elizabeth Warren. If you want to call the interruption derby that devolved before the University of Massachusetts at Lowell students' eyes a debate. Gregory opened by asking Warren about the well-worn Cherokee heritage controversy. Warren repeated what she's said before—including in the last debate, which Brown opened by attacking her on the same issue. (Full disclosure: Warren's daughter, Amelia Warren Tyagi, is a member of The American Prospect’s board of directors and is chair of the board of the magazine’s publishing partner, Demos.)

Gregory devoted many minutes of the debate to the issue, which began when the Boston Herald reported that Harvard University had claimed Warren as a minority on forms to counteract claims that its faculty wasn't diverse enough. Brown wants to use it to cast doubt on the entire biography Warren presents to voters—who were by and large unfamiliar with her before she entered the race—and also to score points with working-class voters who are suspicious of affirmative action. He's suggesting she got a job she was otherwise unqualified for. That's a position that misunderstands the fundamental nature and purpose of affirmative action, and its a view Gregory reinforced when he asked Brown if there was any reason to think Warren was unqualified otherwise. Brown would not say that. He's said, over and over, that he thinks she's a good professor, and he ended last night's debate by saying that he would do "anything in [his] power" to keep her in that position.

Otherwise, the roundtable format Gregory had said he wanted to be a "healthy, cordial exchange," turned into a battle to finish sentences, with counter claims and accusations of lies flying between the two candidates. Gregory lost control. The format allowed for one moment, when Warren tried to interrupt Brown, when Brown got to let loose with something he must have been planning for a long time: "Excuse me, I'm not a student in your classroom. Please let me respond, ok?" Buuuuuuuurrrrrrrrn. #plannedzinger

Is it sacrilege to admit that it was refreshing when students started asking basic questions allowing the candidates to revert to talking points? Because that's what I felt when that very thing happened, 40 minutes in. Finally, the candidates knew what they were saying, things ran smoothly, and Twitter could stop populating my timeline with fake questions Gregory wanted to ask. "Who is your favorite Kardashian?" He did ask Warren why there hadn't been a female senator from Massachusetts. "I don't know," she said, reasonably. "Right now I'm trying to do something about that."

The race has, in the past week, turned into the sort of mudslinging that had been kept at bay by a dignified-sounding but destined-to-die pact to play nice. It reached a new level of ugliness when Brown supporters, including some campaign staffers, faked tomahawk chops and war-whoops to mock Warren's Cherokee story: Some in Massachusetts have been calling her Fauxahontas and Lieawatha since April. (Over the weekend, David Treuer, a member of the Ojibwe tribe, wrote a great New York Times editorial about the prejudices and racism that American Indians face.) The Massachusetts Senate race is one of a handful that will decide the balance of the Senate. If Brown returns for a new term in 2013, it'll be because he was never as much of a fluke as national observers thought. If Warren wins, she'll be the most talked-about freshman senator since Illinois sent Barack Obama to D.C. in 2005. It's also been the most expensive race this year, and, as it drags on, it's costing even more.