Romney on the ropes

When the two candidates square off on Wednesday night, the pressure will be on Mitt to deliver a knockout 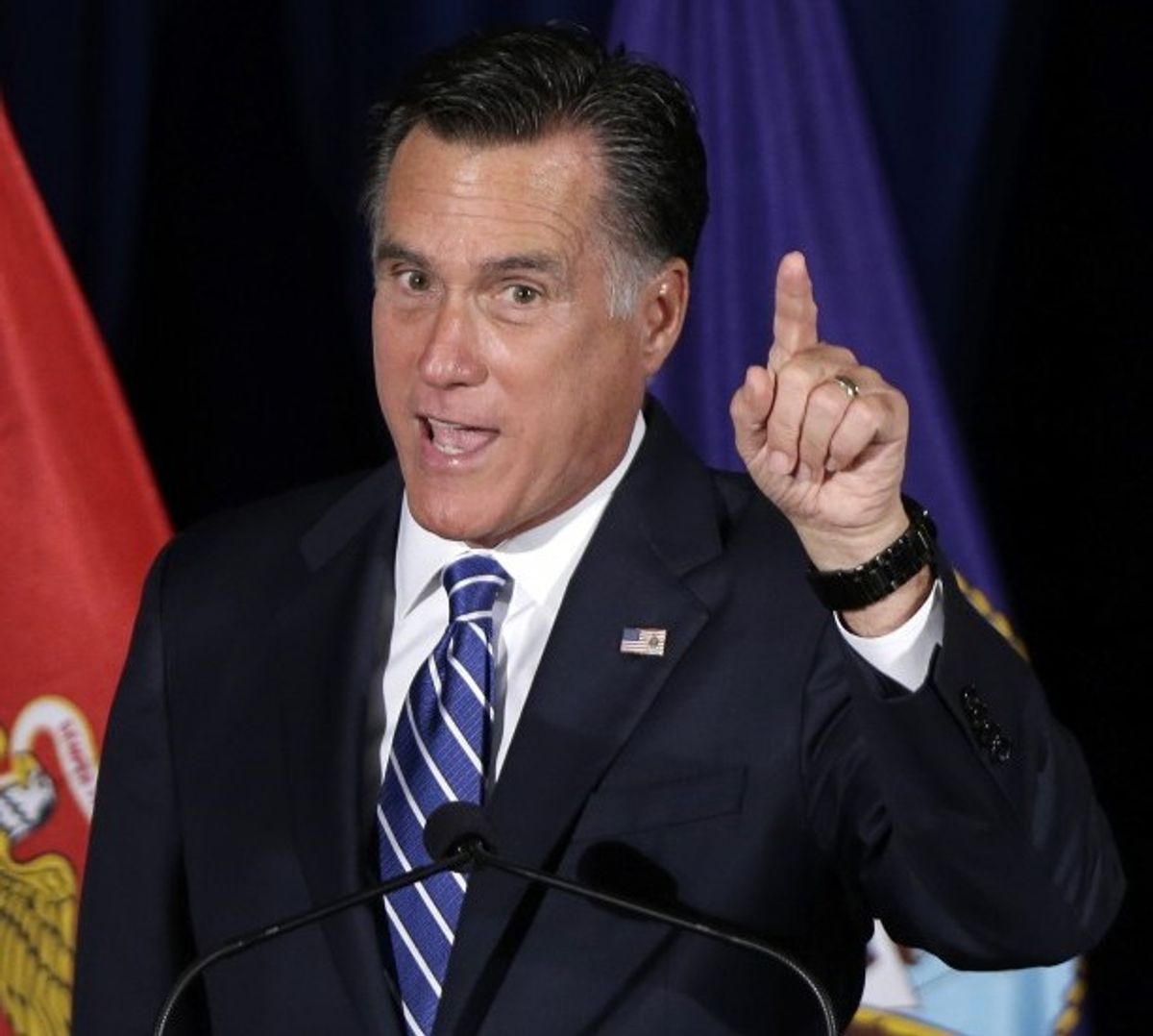 IOWA CITY, Iowa — It wasn’t supposed to be this way.

Every political expert out there will tell you that, in a first debate with an incumbent, the challenger has the advantage. Theoretically, all Mitt Romney has to do is hold his own against Barack Obama in Denver and he scores an automatic point for appearing presidential.

But in reality, Romney will be fighting for his political survival when the two men meet on Wednesday night. With a campaign that has stumbled badly over the past few weeks, the former Massachusetts governor will be looking for a way to regain some momentum as the campaign enters the home stretch.

The Romney-Ryan ticket has trailed in most recent polls, a position many commentators find surprising.

“Why aren’t you guys running away with this race?” Chris Wallace asked vice presidential hopeful Paul Ryan on Fox News Sunday. “Why are you losing?”

Although a new CNN/ORC poll put the Republicans at a statistical tie with Obama among likely voters, it's still hardly the performance some observers were expecting from the presidenct's opponents.

With unemployment high, economic growth low, and the nation uneasy about foreign adventures, it should have been Romney’s race to lose. As analysts never tire of pointing out, no incumbent president has ever been re-elected with such negative numbers.

Nevertheless, Obama is in the catbird seat at this point, and barring any major developments, seems poised for victory.

It’s what has come to be known, variously, as “the likeability factor,” “the empathy gap” or the “do you want to have a beer with this guy?” thing.

In this category, Obama is running away with the stats.

This will matter Wednesday, perhaps more than it should, because debates are less about policy than about image. Viewers will be swayed, or not, more by the wattage of Obama’s smile or the clench of Romney’s jaw than by weighty arguments on taxes or Social Security.

Reports from past contests bear this out. Conventional wisdom tells us that it was Richard Nixon’s five-o’clock shadow and moist upper lip that cost him the election in 1960; he didn’t stand a chance against John Kennedy’s youthful exuberance in the new age of television.

Ronald Reagan probably gained the upper hand more by appearing affable against a tense Jimmy Carter than by cogent argument in the 1980 debates, and George H.W. Bush certainly lost votes by looking at his watch while a boisterous Bill Clinton waded into the audience during their debates in 1992.

The candidates do not need to appeal to the electorate’s collective brain in the debates as much as they need to go for their gut. Votes will follow.

The Democrats have the advantage at the moment. Experts say they have been successful in painting Romney as an out-of-touch millionaire, who neither understands nor cares about the problems of ordinary Americans.

Republicans have been less adept at portraying Obama as a wildly left-leaning socialist, seeking to “replace America’s founding principles,” as Ryan put it in his interview with Fox on Sunday.

Obama needs to avoid a knockout punch Wednesday night, but other than that, he just needs to keep on smiling and hope that nothing goes too badly wrong.

Romney, by contrast, has to change the narrative, reverse direction, and pick up momentum — a much more challenging proposition.

Both Romney and Obama are experienced and accomplished debaters. But Romney has a weakness that the Democrats will doubtless seek to exploit.

In “The Real Romney,” authors Michael Kranish and Scott Helman describe the Massachusetts Senate race in 1994. When questioned about his record at Bain Capital, Romney lost composure.

“’You saw the flash of anger,’ said one former Kennedy aide, describing Romney’s reaction. It was something of an epiphany for the Democratic campaign: Romney seemed to have a glass jaw.”

Look for a few upper cuts on Wednesday evening.

From Obama's corner, there will undoubtedly be a fair number of allusions to the now infamous “47 percent” video recorded surreptitiously at a $50,000-a-plate Romney fundraiser in May, in which the candidate dismissed almost half the country as being beneath his notice.

This has had tremendous resonance with the electorate, and is a gift to the Democrats that just keeps on giving.

“I’m one of the 47 percent,” huffed an elderly campaign worker at the Democratic Party Headquarters in Lisbon, Ohio. She did not want to give her name because she was not authorized to talk to the media. “I get Social Security. I guess I’m irresponsible, because I’m trying to bring up three grandchildren on it.”

Obama also has his vulnerable spots — he sometimes comes across as professorial, and his handlers are undoubtedly working with him on bringing a more common touch to his presentation.

Spin-doctors were out all weekend, trying to prepare the ground for the debates.

“Come Thursday morning we’re all gonna be scratching our heads and saying, ‘Wow! We’re gonna have a real barn-burner for the next 33 days,’” said Christie.

The New Jersey governor also dismissed any blowback from the “47 percent” video, saying that most Americans understood that candidates sometimes stated things “inartfully.”

Ryan, by contrast, talked up Obama’s brilliance as a debater, perhaps trying to paint Romney as the underdog, the Rocky Balboa in the fight.

In the end, it will be left to the pundits to analyze, probably ad nauseum, who “won” and who “lost.”

But in reality, that determination will be made within the first few minutes of the debate by millions of viewers, who will be affected by a set of intangibles that they most likely are not even aware of.

Most voters, we are told, have already made up their minds. This debate, like most of the billions in advertising, is directed at a very small number of potential voters.

But there are five very intense weeks still to go before Election Day, and in a race as close and as contentious as this one has been, almost anything could still happen.