Romney has been lambasted for not revealing more about himself, but maybe we've seen enough 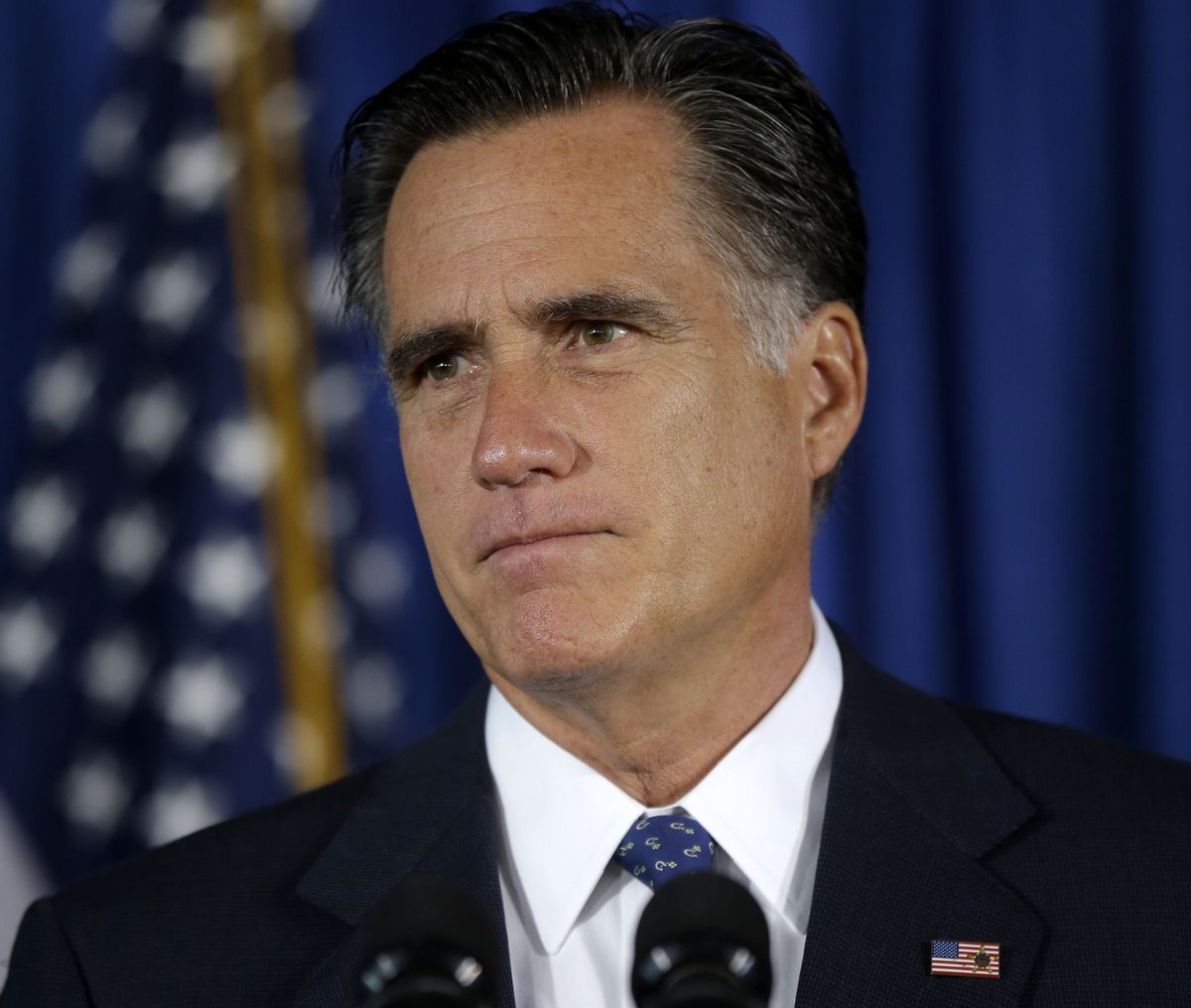 The American conservative movement appears to have swallowd its own propaganda hook, line and sinker. Many, if not most people on the right believe that there's a huge silent majority who think a lot like Rush Limbaugh, and are poised to rise up and dispatch the Kenyan Interloper. The only thing holding back a landslide of support for the “natural” government run by white Republicans is the perfidious news media and their lackeys conducting polls.

As such, they see the debates as a moment when Mitt Romney can land a knock-out blow, cutting through the media filter to connect directly with the American public. They're terribly, almost comically wrong, and it shows in some of the advice they've been offering to Romney on the eve of the debates. Let's take a look at some of the worst.

Donald Trump thinks that Romney should angle for the huge number of voters who are supporting Obama despite their belief that he's a Kenyan anti-colonial Manchurian candidate put up by the New World Order.

In debate, @mittromney should ask Obama why autobiography states "born in Kenya, raised in Indonesia."

The truly sad thing about Trump is that – unlike people like William Shatner and Adam West, who have fun with it – he doesn't have enough self-awareness to grasp that he's become an object of scorn and ridicule.

2. Newt: Mitt Should Do Exactly What I Did When I Lost to Him in the Primaries

You have to believe that the whole country is indistinguishable from the GOP base to offer advice like this:

You can be on offense without being offensive.

The strongest reactions I got to my debates came from people who were desperate for someone to stand up to the media and redefine the questions and reframe the assumptions.

Americans are sick and tired of the unending liberalism and suffocating groupthink of the elite media.

If you look at my strongest applause lines virtually every one was taking on the media.

Yeah, the GOP base loves that, but they'll be voting for Mitt anyway.

Charging that attacking the media is an easy trick to curry favor with the “home crowd,” Mitt Romney on Wednesday took a shot at New Gingrich over the memorable moment from last week’s CNN-sponsored GOP debate when the former speaker lashed out at moderator John King.

“It’s very easy to talk down a moderator. The moderator asks a question and has to sit by and take whatever you send to them,” Romney said on Fox News. “And Speaker Gingrich has been wonderful at attacking the moderators and attacking the media. That’s always a very favorite response for the home crowd.”

If you're not a member of the right-wing tribe, you may not think of Jimmy Carter as History's Greatest Monster. But the appeal on the right of seeing this race as one between a hapless Democrat stumbling on foreign policy who's about to be broadsided by a 21st-century Ronald Reagan is too great to pass up.

Under President George W. Bush after 9/11 there were no attacks on America and no deaths as a result of terrorist attacks on Americans. President Obama can’t say the same. Four Americans are dead in Libya. He call them “bumps in the road” and blames a movie. I call it outrageous.

He tells us America is more respected in the Middle East and Al Qaeda is finished. I see chaos, American weakness and a president who won’t be honest with voters because it might upset his re-election prospects.

Actually dozens, if not hundreds of Americans died as a result of terror attacks in Afghanistan and Iraq and elsewhere under George Bush, and of course 9/11 happened on his watch. But more to the point, as Steve M. at No More Mister Nice Blog points out:

Here's the thing: Most Americans aren't like Republicans -- they don't have a Pavlovian hate-response to the name Jimmy Carter, or to Jimmy Carter as a metaphor. And keep in mind that a 45-year-old today was 12 when the Iranian hostages were taken; everyone that age and younger probably has few if any clear memories of this moment in our history...

Now, here's where what's usually an advantage for the right becomes a disadvantage. The right-wing rank-and-file is permanently engaged by politics; Fox News and talk radio are entertainment for a lot of right-wingers. That's good for Republicans a lot of the time; for instance, it helps boost their turnout in otherwise low-turnout midterm elections.

But in this case, it means Republican operatives may be anticipating a higher level of engagement in this story than actually exists. Average Republicans may be following this story in great detail, and may be able to parse it very finely, but I'm certain that most of the rest of America can't do the same.

The GOP operatives who are pursuing this "Jimmy Carter strategy" seem to be assuming a mass obsession with the Benghazi timeline, as well as a political insider's (or at least a maven's) familiarity with political and campaign narratives...

With a recent New York Times report that the Romney campaign was practicing the deployment of some pre-arranged “zingers” came a number of conservatives, including New Gingrich, urging Mitt to win over America with his dazzling wit!

But Mitt's no Shecky Green – this is the candidate who joked about how he likes firing people, and upon seeing actual black people thought it hilarious to sing "Who Let the Dogs Out?"

Newhouse was heeding the advice many Republican consultants have been giving for fo some time now. “Many swing voters are ready to throw Obama out of office if Mitt Romney gives them some clear substance of how he will help them if elected,” Republican strategist Keith Appell told the AP.

This is the worst possible advice, given that Romney's plans don't add up. The specific policies he favors are nothing less than toxic with the American public. Romney really has no choice but to stick to vague platitudes about “freedom.”

The Hill interviewed a bunch of strategists from both major parties who urged Romney to “be himself.”

There is time for Mitt Romney to forge the personal connection with voters that propels successful candidates to the White House, according to Republican and Democratic commentators alike.

But it’s running out.

These experts say that, policy prescriptions aside, the GOP nominee needs to display greater personal ease and consistency of tone than he has done so far.

Republicans and some neutral observers argue that Romney has been unfairly tarred as a callous plutocrat.

It would be much closer to the truth, they argue, to see him as a fundamentally decent man who struggles to overcome a natural reticence and self-consciousness.

I don't think the answer to Romney's troubles is showing the nation more Romney...