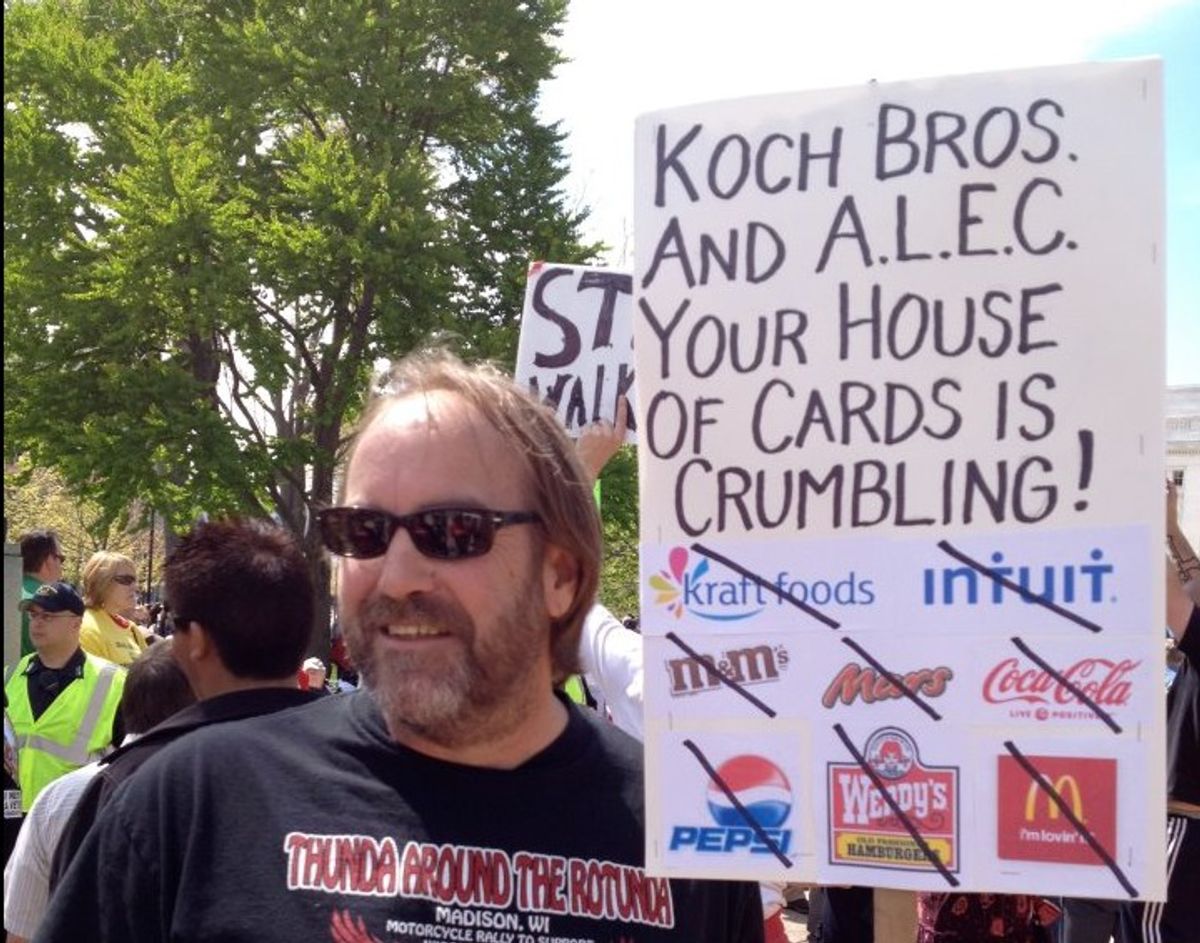 (Facebook/Center for Media and Democracy)
--

Two watchdog groups have filed a lawsuit against five Wisconsin state lawmakers; it claims that the Republicans violated the state's public records law by failing to disclose private emails that may have tied them to the conservative advocacy group the American Legislative Exchange Council.

Common Cause and the Center for Media and Democracy sued five lawmakers, Reps. Tyler August, Dan Knodl, Tom Larson, Pat Strachota and Jeremy Thiesfeldt, in county circuit court over their failure to provide private emails after a public records request by CMD.

From the Milwaukee Journal-Sentinel:

"An email included in the court filing shows Thiesfeldt is involved with ALEC but tries to keep it out of his state email account.

'Please send ALL ALEC material to the Representative's PERSONAL e-mail . . . from now on,' says a June email to ALEC sent from Thiesfeldt's state account. 'Please do not send his state account (@legis.wi.gov) any more updates. He will keep up through his personal account.'"

According to the lawsuit, correspondence about ALEC in a private email account is still subject to a public records request, because it is "indisputably related to official government business. Wisconsin legislators are members of ALEC only by virtue of their status as a state legislator, and they correspond with ALEC in their official capacity as Wisconsin legislators."

But, "defendants have repeatedly given evasive responses in response to direct questions from CMD and Common Cause about whether they have searched personal e-mail accounts. Defendants have informed CMD and Common Cause that their requests are completed without releasing the requested records, and without issuing a denial or declaring what part of the law they believe entitles them to deny the request," the lawsuit says.

Both Common Cause and CMD have been fighting the influence of ALEC, a conservative advocacy group that helps corporations and interest groups model legislation for state lawmakers to introduce in legislatures throughout the country. Some of the group's better-known legislation includes voter ID and the "stand your ground" law that was made infamous after the killing of Trayvon Martin.

ALEC also has ties to a number of conservatives in Congress, like Rep. Jim Jordan, who is a member. In September, the Republican Study Committee, a House caucus of more than 160 conservatives, began working to establish a "partnership" with the group.

Strachota, one of the lawmakers who is the subject of the lawsuit, told the Journal Sentinel that she was surprised that she was targeted, and has never introduced ALEC legislation. "I don't feel this is a real complaint," she said. "I feel it's a political witch hunt. I think it's unfortunate they're wasting people's time and energy. It just dumbfounds me."

Common Cause said in a statement on the suit: "As long as ALEC is letting corporate executives write laws and lobby lawmakers under the guise of charity, Common Cause will be there to expose their activities. This lawsuit is just the latest step in making sure ALEC is held accountable."