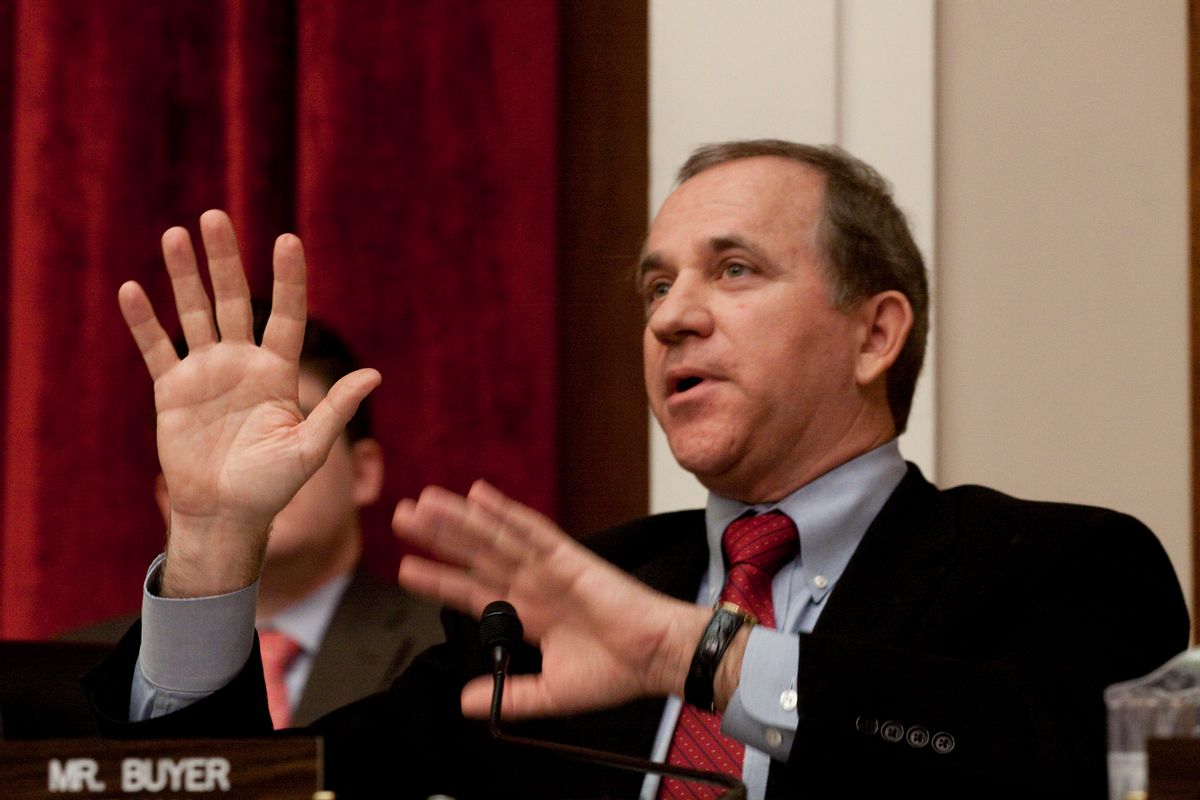 A former 18-year member of Congress who was a longtime friend of the tobacco industry while in office has become a paid consultant and registered lobbyist for tobacco giant Reynolds American.

Steve Buyer, a Republican congressman from Indiana from 1993 to 2011, had been the beneficiary of over $100,000 in Reynolds donations over the years and pushed the company’s legislative goals.

In 2009, he gave a famously colorful speech on the House floor endorsing smokeless tobacco: "You could have smoked that lettuce and you still end up with the same problems. You could cut the grass in your yard, dry it, and roll it up in a cigarette, and smoke it — and you're still going to have a lot of problems," he said. "It is the smoke that kills, not the nicotine.”

Buyer revealed the new job for Reynolds American in little-noticed testimony Sept.19 before the Indiana General Assembly's Health Finance Commission. A federal disclosure filing shows that Buyer and his former chief of staff, Mike Copher, registered to lobby for a Reynolds American subsidiary called RAI Services as of the beginning of September. (Buyer became a lobbyist immediately after leaving Congress in 2011, with a health care company his first client.)

At the Indiana hearing, Buyer said he is working as “an advocate of Harm Reduction Strategies” for Reynolds American, according to his prepared remarks.

Buyer argued that the public is being “misinformed by the public health community about risks presented by tobacco in its various forms.” He disputed statements by the Food and Drug Administration and Centers for Disease Control and Prevention that smokeless tobacco — which include chewing tobacco and snuff — is not a safe alternative to smoking cigarettes. The CDC says smokeless tobacco products “can cause cancer, oral health problems, and nicotine addiction.”

Messages to Buyer’s lobbying firm, where Copher is now a partner, were not returned. Reynolds American declined to comment.

In the face of declining U.S. cigarette consumption rates, Reynolds American has been aggressively marketing smokeless tobacco products such as its Grizzly and Kodiak snuff lines.

Buyer has long been an advocate of smokeless tobacco and an ally of Reynolds American.

The company gave $132,500 overall to Buyer’s campaign committee, political action committee, and private foundation between 1997 and 2009, public filings show. More than $80,000 of that came Buyer’s way in 2008-9 when proposed stricter tobacco regulations were before Congress and had to make it through the Energy and Commerce health subcommittee, on which Buyer sat.

Buyer led the charge against the bill, which gave the FDA the power to regulate tobacco and was ultimately signed into law by President Obama in 2009. Buyer had offered an amendment that would have delayed implementation of the law for up to 10 years, Congressional Quarterly reported at the time.The amendment failed.

He then offered an alternative bill, backed by Reynolds American, that would have had fewer restrictions and created a new Tobacco Harm Reduction Center in the Department of Health and Human Services instead of giving the FDA the power to regulate tobacco. Buyer’s bill, which also touted smokeless tobacco products, failed in a House vote.

It was during the debate over tobacco regulation in 2009 that Buyer made his remarks about smoking lettuce:

The speech earned him national attention, including a much-viewed episode of the satirical Auto-Tune The News.

Buyer announced in 2010 he was retiring from Congress at the end of his term amid national media scrutiny of his non-profit, the Frontier Foundation. Buyer cited family reasons for the decision.

In six years, the charity had raised nearly $900,000 from companies with business before Buyer’s committees — including $50,000 from Reynolds American. But it had not spent any money on its stated purpose: scholarships for Indiana students. Some of the money was spent on fundraising golf trips to the Bahamas and Disney World for Buyer and the corporate contributors. The foundation maintained it was waiting to raise $1 million before giving out scholarships.

The group’s most recent tax return, covering 2010,reported donations of $10,000 to a pair of Indiana hospitals. It reported nearly $600,000 in assets. Messages left with the Frontier Foundation were not returned.

In an interview with CBS News during the foundation flap, Buyer denied impropriety when asked about his role fighting the FDA regulation of tobacco and the Reynolds donations to his foundation.

"I created this,” he said of his alternative bill. “R.J. Reynolds didn't create that. Steve Buyer created that.”