College graduates are in for a rude awakening

Grade inflation has spawned a generation of graduates convinced they're exceptional. They're not 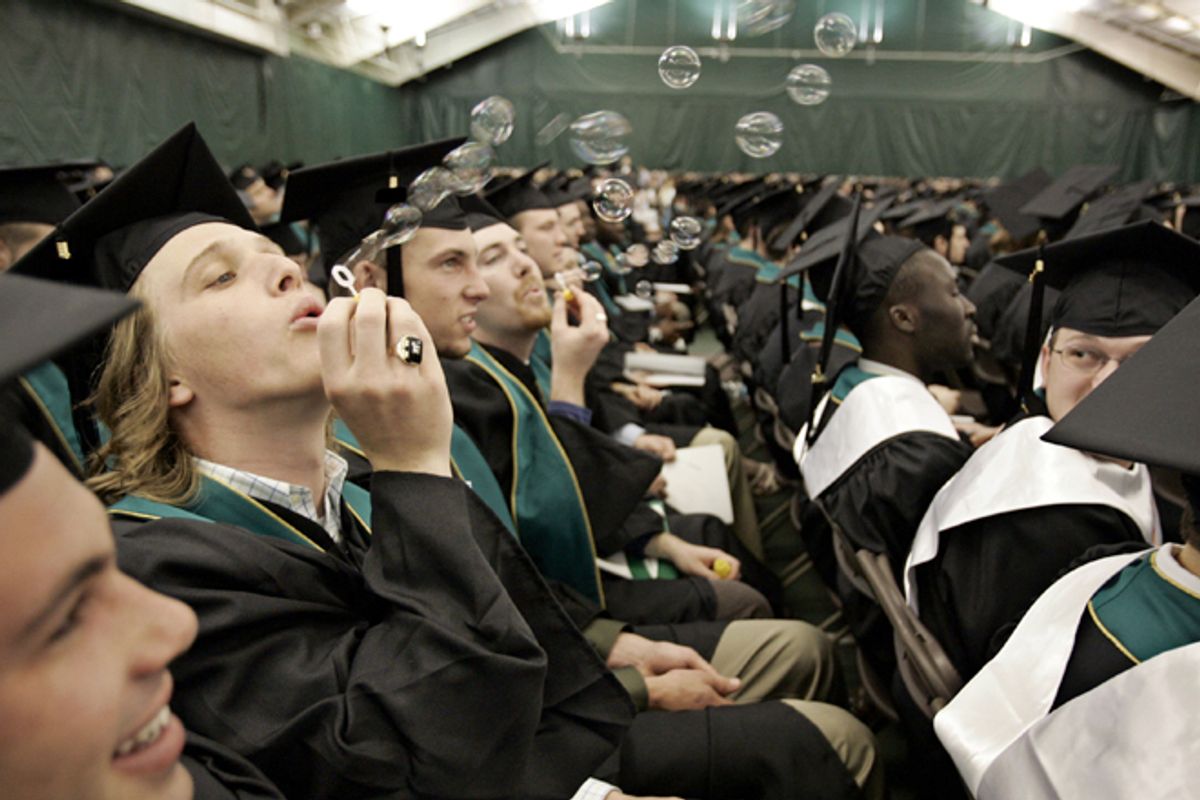 In a group of any size, most of the members of the group will be mediocre.  This is true by definition: the word “mediocre” simply means “in the middle,” i.e., average.  It’s telling that in America today calling something or somebody mediocre has become an insult.  This is especially true when it comes to the children of the middle and upper classes, who are almost without exception gifted and talented.  (Social scientists have established that the last non-gifted white child in America was born in Reseda, Calif., in 1962.)

The epidemic of giftedness is reflected in the grading practices of our colleges and universities. In the early 1960s 15 percent of the grades awarded to students at four-year undergraduate institutions were A's, while 35 percent were C's.  By 2008 43 percent of the grades at such schools were A's, while the percentage of C grades had declined to 15 percent.  In other words, 50 years ago the most common grade was a C, and A grades were fairly unusual.  Today the most common college grade is an A, and A's and B's account for around 80 percent of all grades. Over this time the average college GPA has risen from 2.4 to 3.1 (At private schools it’s 3.3.)

It’s probably not a coincidence that grade inflation took off just as the first baby boomers were getting to college, and then, after flattening out between the mid-1970s and the early 1990s, started moving skyward again when the echo boomers -- the children of the baby boomers -- began to arrive on campus.  Baby boomers of the college-going classes grew up being told they were part of a uniquely gifted and special generation, which was going to change the world and usher in the Age of Aquarius. (This was the thesis of Yale professor Charles Reich’s preposterous 1971 book "The Greening of America," which sold millions of copies.)

Needless to say, people taught to think this way about themselves will apply this cultural logic even more passionately to their own children, which is why the echo boomers are all getting A's today. This is especially the case if their parents pay outrageous tuition to private schools like Duke and Harvard, whose primary social function is to assure the elites that they really are elite, as determined by the rigorous testing procedures employed by our educational “meritocracy.”

The end result of all this is what I call special snowflake syndrome.  As I outline in my book "Don’t Go to Law School (Unless),"  special snowflake syndrome is a product of optimism and confirmation biases. For example, the large majority of people going to law school today are paying far too much for law degrees that in many cases will end up being worse than worthless.

But young people keep forking over $200,000 or more (largely in the form of taxpayer-backed federal loans, many of which will never be repaid and which can’t be discharged in bankruptcy) for such degrees, because 98 percent of all law students are certain that they will finish in the top 10 percent of their graduating class, and thus actually be eligible to get a decent job.

This statistically questionable reasoning is a product, in no small part, of the fact that we’ve been handing out increasingly high grades to college students, to the point where more than half the class at some schools graduates with academic honors. (This reminds me of the French minister Talleyrand’s remark that the monarchy was creating so many noble titles that it was a disgrace both not to have and to have one.)

In the end, though, the grim joke is on the children of the children of the baby boom.  They are graduating into a world in which there are ever-fewer jobs that justify the enormous sums that were spent (or borrowed) to educate them.  It’s no surprise that we in higher education feel more and more impelled to pay them in the cheap currency of ever-higher grades.