Embattled Greeks lash out at migrants

With a right-wing party in parliament and jobs disappearing, violence against foreigners is soaring 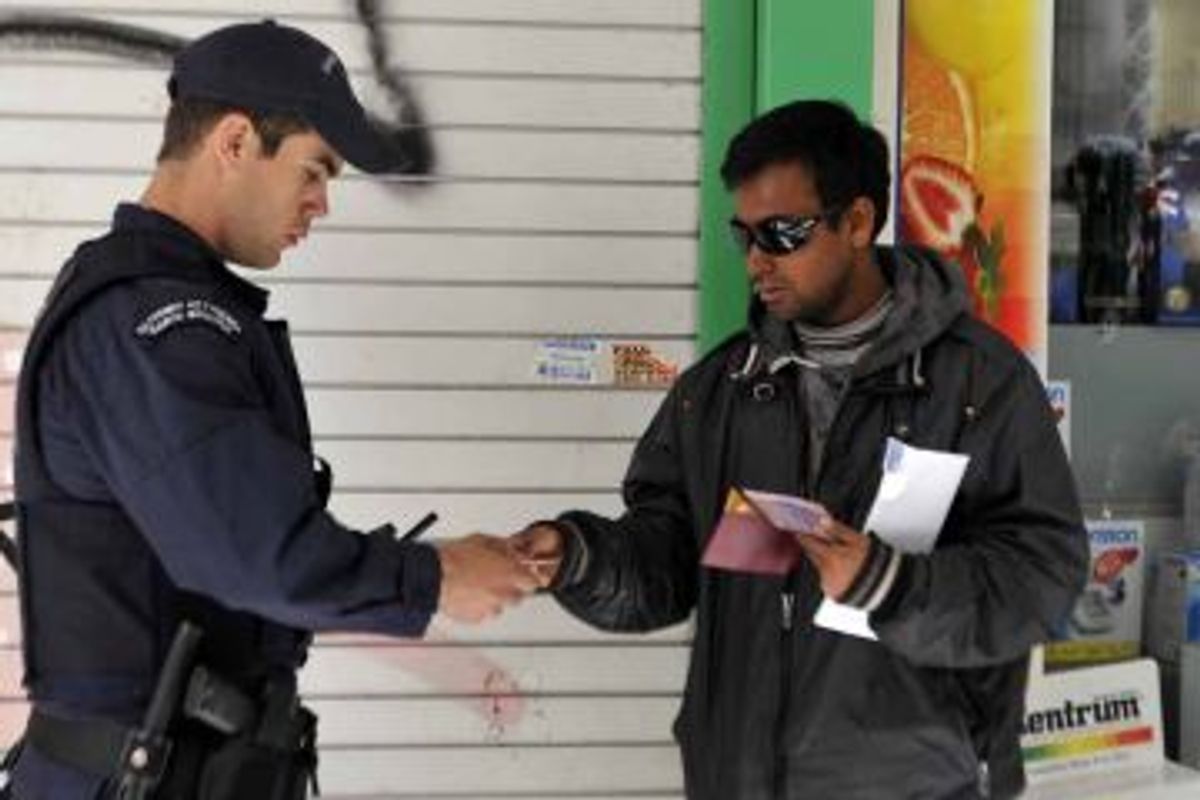 ATHENS, Greece — Mukhtar Jama sold the land he owned in the Somalian capital Mogadishu after deciding he had no future in his shattered, war-torn homeland. The $1,500 he earned went to paying a smuggler to get him to Europe.

The lanky, bespectacled 23-year-old trekked through rough terrain, sometimes with nothing but sugar water to sustain him during the two-month journey. He reached his destination when he crossed the muddy Evros River dividing Turkey from Greece.

Or so he believed. “I thought I’d find a better life,” he said in central Athens. “You can enter Europe, but you can’t really enter.”

Jama is one of hundreds of thousands of migrants who have crossed into Greece only to find themselves confronted by a dismal intersection of two unfolding crises. A decade of catastrophic economic decline and political upheaval together with Greece's role as the prime gateway to the European Union are helping fuel a wave of racism and violence.

The country is believed to have almost a million immigrants, about 10 percent of the total population. Nearly half are undocumented, experts say, although some politicians have put the number above a million and many Greeks believe it to be far higher.

Wave after wave of austerity measures demanded by international lenders to bail out the economy have eroded the government's already poor ability to manage the influx. Among stricken state services, the asylum system is backlogged by tens of thousands of applications.

With little chance of finding work, asylum seekers from Afghanistan, Somalia and, increasingly, Syria have been condemned to homelessness and abject poverty in decaying urban neighborhoods along with illegal economic migrants from countries such as Pakistan and Bangladesh.

Their plight has been made worse by a rapid rise in anti-immigrant sentiment that has fuelled the ascent of the extreme right-wing party Golden Dawn, which vows to “undirty” Greece of migrants. The party shot from being a taboo subject in polite society to a main topic of conversation after it won seats in parliament along with 7 percent of the vote in June.

It’s popular among a growing number of people who refer to their country as “Europe’s warehouse,” and say their country is overwhelmed by migrants when Greeks themselves are suffering.

Such sentiments prompted Prime Minister Antonis Samaras to vow to “reclaim” Greek cities from illegal immigrants. In August, police began rounding up thousands of migrants to check their documents.

The authorities say such actions to enforce the state’s immigration laws are long overdue. But human rights groups accuse them of contributing to an atmoshpere that's helping fuel a crisis.

"While tourists are welcome," Human Rights Watch wrote, "migrants and asylum seekers face a hostile environment, where they may be subject to detention in inhuman and degrading conditions, risk destitution, and xenophobic violence."

In one example last summer, a group of men on motorcycles repeatedly stabbed an Iraqi man on a central Athens street. Witnesses say he bled to death. Last week, another group of attackers stabbed two Pakistani men near an anti-racism demonstration in Athens.

Such attacks, along with a rise of violent vigilante groups, have made many migrants fear walking the streets.

Although Golden Dawn denies involvement in the violence, rights groups say its recent political success has caused attacks against migrants to spike sharply, along with the government's almost complete failure to prevent it or prosecute its perpetrators.

The party’s popularity is growing as Greece's plight intensifies, which is giving it a greater influence on mainstream Greek politics. The party rails against corruption, supports reneging on a European Union bailout agreement and advocates mining the border with Turkey to prevent what it calls an invasion of immigrants that is “altering the demographic composition.”

“We feed them and give them beds, and more keep coming,” says Maria Neofotistou, a Golden Dawn supporter who owns a couch-pillow shop near Athen's Omonia Square, an area that's home to many Pakistani men.

Neofotistou, who says she’s struggling to keep her shop open, praises Golden Dawn for donating food to needy Greeks and predicts the party will double its support in the next elections.

The bad economy is helping drive many migrants to try moving to other European Union countries. But that’s a major challenge partly because the country doesn’t share a border with the rest of Europe's 26-state open-border zone.

Joe Farajallah, a 35-year-old from Sudan who was begging at café tables in central Athens, says he doesn’t have enough money to reach England or pay a smuggler to get him there.

“There are no jobs,” he explains. He recently lost work earning $6 an hour unloading boxes at a clothing store and often sleeps in the park. “Now look at me,” he said, choking back tears pointing at the plastic bag in which he carries all his belongings.

Many migrants try to leave Greece despite the difficulty of crossing borders. Some gather in the port city of Patras to try to sneak onto ships leaving for Italy. Last spring, a group of rioters wearing motorcycle helmets and wielding sticks attacked an abandoned factory in the city that had become a makeshift dwelling for many such migrants.

Critics say Greece isn’t solely to blame for its inability to cope. They say other EU countries have failed to acknowledge their shared responsibility for their common problem.

Some advocate reforming the EU’s “Dublin II” regulation, which places responsibility on the country of an asylum seeker's first entry for examining his claim. They say the rule puts too high a burden on periphery countries that take on most migrants, such as Greece.

However, politicians in Germany and other EU members concerned that migrants entering Greece often find a way to their own countries have accused Greece of failing to control its borders and have threatened to conduct border checks that would challenge the open-border agreement that’s a pillar of European unity.

That gives little hope to Zainab, who traveled to Greece from Afghanistan with her two young children to escape her abusive husband and whose asylum application is still pending after nearly four years. She has no job and lives in a small basement apartment she pays for with help from a Christian charity.

Although Greece is safer, she says living here is virtually “the same as Afghanistan.”