The two comedies debuted 30 years apart, but their similarities are uncanny. Or are they? 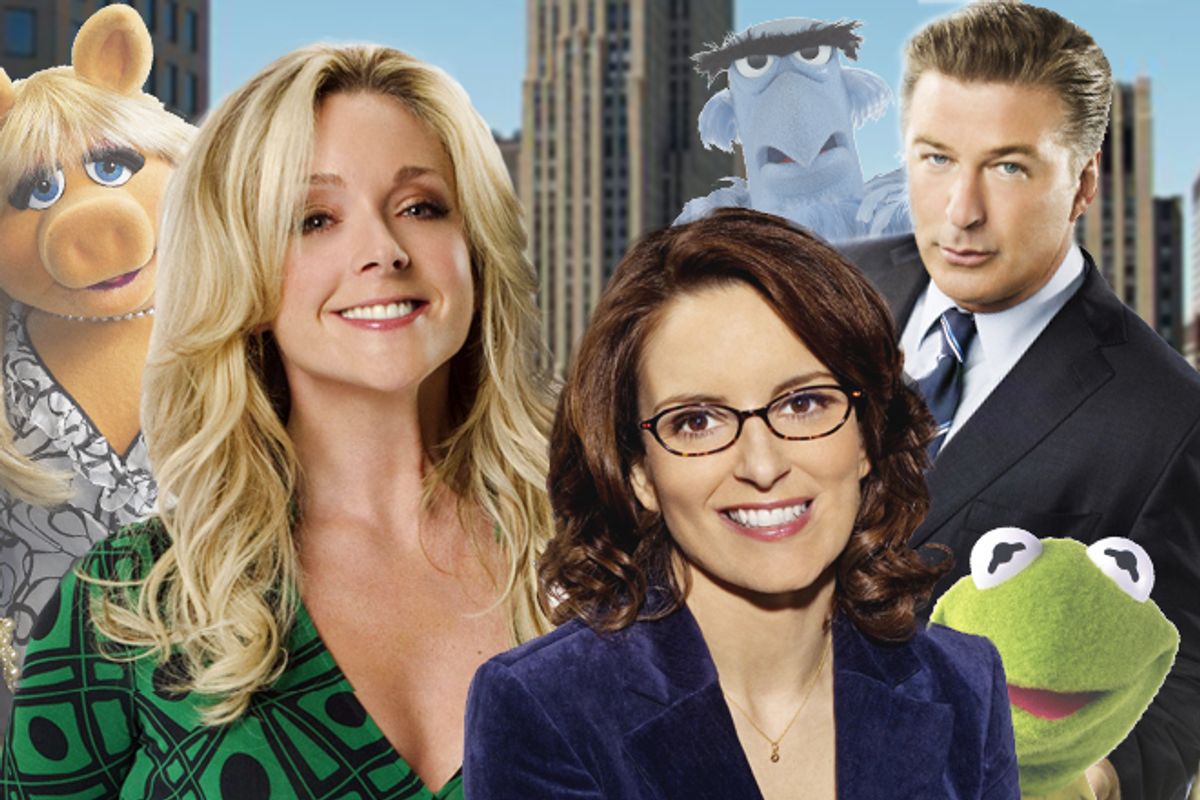 Over the summer, while on vacation, my partner, Dustin, and I decided to watch the first season of “The Muppet Show.” We marveled at the guest stars — Juliet Prowse, Ruth Buzzi, Joel Grey.  And then we marveled at the way Kermit was troubleshooting an issue with Scooter, whose new dog demanded his own dressing room. And in a later episode, he was ego-massaging Miss Piggy. I realized … I was watching Liz Lemon.

I tested my theory on a Facebook thread: Jenna is Miss Piggy. Kenneth is Scooter. Tracy is … possibly Gonzo? That was a tougher one to cast. On the thread, a friend led me to a blog post by comic-book writer Brian Lynch, from 2009. It turns out I was not the first person to have this revelation. Brian had some tough words for "30 Rock" — perhaps in jest (tone on the Internet can be hard to parse). He wrote, “Tina Fey's ‘30 Rock’ is currently the most acclaimed comedy series on television. It's won numerous Emmys and Golden Globes and I think Pulitzers. Critics and audiences alike love the show and its lovable zany characters, and consider it one of the most original comedies in years. And I guess it is original … if you've never seen ‘The Muppet Show.’ Because, my ‘friends’ (in quotes because I don't know or trust you, please don't be offended), Tina Fey's ‘30 Rock’ is quite obviously ripping off Jim Henson's beloved TV show.”

He found the premise to be the same — a wacky sketch-comedy show seen behind the scenes. He also confirmed my hunches with his own theories: that Liz is Kermit, Jenna is Miss Piggy, Kenneth is Scooter. And he saw Jack as the Eagle. This is where we differed: I saw him more as Scooter’s uncle, the elusive JP Grosse, who appears in only a handful of episodes. They wear the same suits, look to be about the same age, and yet here he is, endearing and insane and blithely exploitative, bigger than life and yet not. By the end of the post, as Lynch chased characters for the rest of the cast, I was less, rather than more, convinced of the parallels. At the very least, you couldn’t say Tina Fey was ripping it off in earnest. You could only be joking.

“30 Rock” would appear to be, at least retrospectively, unafraid of the comparison — in fact, it seems to be inviting it. Earlier in 2009 — and three months before Brian posted his rant (perhaps this is what inspired him) — “30 Rock” aired the episode “Apollo, Apollo,” in which Jack tells Kenneth that he wants to see the world through his eyes — and we finally have the opportunity to see the world through his perspective. Suddenly, everyone is transformed into a Muppet: Jack. Kenneth. Liz, who is trundling by. We see her first as a floppy, felt being. Then we switch out of Kenneth’s line of vision, and her human body still flounces like a Muppet. Liz did not appear as Kermit there, though. We might see her as Kermit, but if Tina Fey sees Liz as Kermit, she has not declared so publicly.

As it happens, what connects the two shows is "Saturday Night Live"; both Tina Fey and "The Muppets" have it in their DNA — they’re family. If "The Muppet Show" and Tina Fey's "30 Rock" are alike, it's because "The Muppets" were almost fired from "SNL" (they left first), and Tina Fey had rocky times there herself. There are very real reasons each has some of the same edgy humor, inside jokes and ridiculous numbers.

According to “unauthorized Muppet historian” Elizabeth Stevens, in an essay she published in Electric Lit, Jim Henson wanted to make puppetry for adults: "So, in 1975, when production was starting on a new live variety show called ‘Saturday Night Live,’ Henson joined up. But the rest of the ‘SNL’ gang did not get along with the Muppets. They were similar in many ways — the two troupes were synergistic, rebellious, innovative — but Lorne Michaels was 32 at the time and his group were mostly unmarried, whereas Henson was already 40, already a father to five.”

When Tina Fey came out on top at "SNL," she spoke to Virginia Heffernan at the New Yorker. “I’d had my eye on the show forever, the way other kids have their eye on Derek Jeter,” she said. Now I'm going to go out on a limb here: Like most of us, Fey watched "The Muppet Show" and "SNL," and the Muppets on "SNL" might have gotten on her radar, perhaps in reruns. "The Muppet Show" was not ripped off by Fey, it was her bedtime story, an influence that goes back to childhood for her as it does for so many of us, with the difference being that she is their heir. Most of my sense of humor comes from the timing in "Muppet Show" jokes, and it seems to me the sensibility I missed when the show went away moved to "30 Rock" and reassembled itself. It’s puppetry for adults that uses actual human adults. If anything, the relationship between the shows is most like that between Alec and Billy Baldwin, in last season's episode where Billy plays an actor who gets way too far into Jack’s head while playing Jack in a made-for-TV movie about his wife’s kidnapping by Kim Jong-il. The real brotherly resemblance between the two becomes hilariously uncanny — so like him but so not like him, you keep thinking as you watch the two, again and again. The joke is that they’re strangers and had never met before now.

This is “30 Rock’s” last year, and tonight, its season premiere, so I’m glad we figured this out.