Obama needs to drop the "professorial" bit, or he'll wind up like Adlai Stevenson in the 1950s -- a brilliant loser 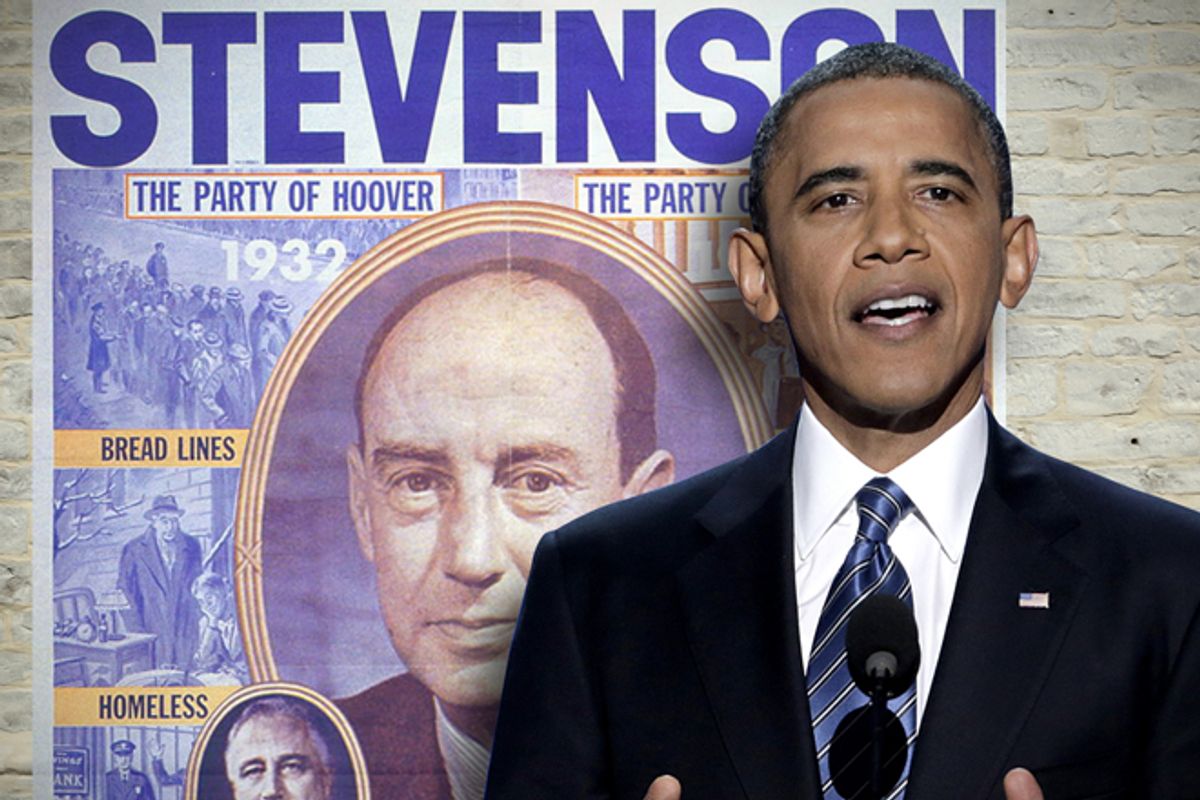 Last night, I watched Barack Obama morph into Adlai Stevenson, the one-time governor from Illinois who lost the run for the presidency in 1952 and 1956 -- and the man for whom one of the worst tags in American political lexicon was coined: “egghead.”

The pundits and analysts all agree: Mitt Romney won the debate.  But Obama also lost it. And he lost it, in part, by coming off as too professorial and not defining himself sharply enough.  There were plenty of opportunities to dredge up Romney’s infamous “47 percent” comment, such as when Jim Lehrer tossed him a softball about Social Security.  But no. Obama hemmed and hawed, hoping perhaps to convey the complexity of issues, but succeeding mainly in looking like he didn't want to be there. (File under small mercies: At least he didn’t look at his watch.)

I had the particular advantage of seeing the debate in a bar in my fair state of Ohio, at a “watch party” organized by the local Democratic Party.  I heard two to three faint cheers during the debate and then silence and private conversations as the hour and half proceeded. Obama lost most of that local audience that he should have energized.

As I watched and nursed my beer, my historical antennae kept going back to 1952.  When Adlai Stevenson won the nomination that year, he told the party faithful at the convention that he wanted to “take advantage of this great quadrennial opportunity to debate issues sensibly and soberly …  Better we lose the election than mislead the people.”  He was a master of policy detail and possessed a vast knowledge of foreign affairs. He came across as intelligent and witty, but that just made him seem aloof, more scholar than president.  His opponent during the campaign – which was actually much more Vice President Richard Nixon than it was Ike – bludgeoned him for being indecisive and elitist.  Eisenhower himself, when he entered Ohio on one of many whistle stops, derided Stevenson’s “aristocratic explanations in Harvard words,” his “faintness at heart” and his “elaborate indecision.”

Which is to say: “egghead.”  It was the brothers Stewart and Joseph Alsop, two middle-of-the road Op-Ed writers, who officially started using that term in 1952 to describe Stevenson. (Stewart Alsop said Stevenson campaign headquarters had the feel of a "university town.") The label stuck  – it helped that Stevenson had an impressively dome-like head – solidifying the perception that the candidate was too intellectual to connect to ordinary Americans.

Stevenson, though, just kept right on insisting that complexity should frame the campaign.  When Eisenhower rolled out his “spot” advertisements, Stevenson brayed about “high-pressure” and “public relations men” who wanted to turn the election into a contest between “Ivory Soap” or “Palmolive.”  He wore his intelligence as a badge of honor.  When asked after his defeat in 1952 about the idea that he was too eggheadish to win office, he quipped, winningly, “Eggheads of the world arise, you have nothing to lose but your yolks.”

Of course, Barack Obama doesn’t have to be Adlai Stevenson.  Normally friendly pundits wigged out about him last night (Chris Matthews, typically -- though even more embarrassingly than usual -- turned apoplectic).  And it’s not right to make too much of a single performance.  There are still opportunities for the president to define himself more sharply.  And, after all, no one really knows for sure how debates shape – if they do – an election’s outcome.

Even so, the debates are a rare opportunity for Americans to get a look at the two candidates side by side, and in a (relatively) unscripted context. And last night's Obama was too deliberative, too convoluted. He can't say he wasn't warned. The president's debate-prep team tried to drop the "verbose and professorial" style. To no avail. Obama needs to fix this problem, and fast.

Obama certainly shouldn’t draw the conclusions that Adlai Stevenson seemed to after his loss in 1952 – that being smart, complex and deliberative "egghead" can win the hearts of Americans.

Kevin Mattson is a historian at Ohio University and the author, most recently, of Just Plain Dick: Richard Nixon's Checkers Speech and the "Rocking, Socking" Election of 1952