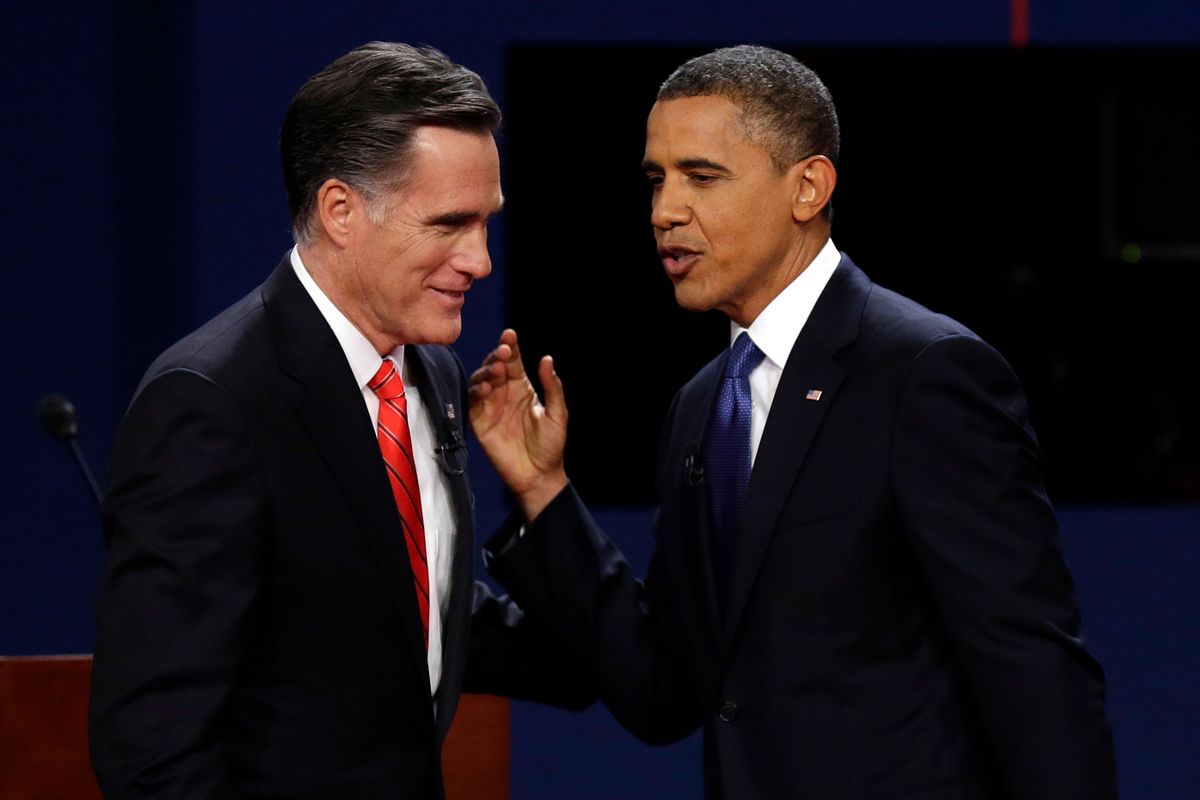 It is true, as Salon's Alex Pareene says, that Jim Lehrer asked questions that suggested "domestic policy" is an arid and narrow space where deficit reduction and maybe one or two other things trump almost anything else. But why did  Obama cede that ground to both Lehrer and Romney, with barely a desultory defense of what he stands for?

Both campaigns had essentially been appealing to their bases -- Romney because he was pinned down by the Republican primaries and subject to ongoing purity tests, Obama because hope and change don't really work for an incumbent and because Republican obstructionism and extremism left few other options. If liberals spent much of Obama's first term griping that he was bringing a knife to a gun fight, they were energized by a campaign that wasn't afraid to attack Mitt Romney at the same time that it made an affirmative case for basic liberal values, at the convention and elsewhere. And, crucially, they were galvanized by spotlights on just how radical elected Republicans are these days, from Paul Ryan making Ayn Randian cruelty mainstream to Todd Akin bringing the crudest antiabortion talking points out of the bottom drawer.

Yesterday, these people -- and I count myself among them -- found nothing to inspire them, not just because of the president's affect, but owing to his failure to make a positive case for a social contract beyond, let's just say it, plutocracy and patriarchy. Obama seemed irritated to hear Romney pretend he had nothing to do with those wacky gentlemen (including the one he used to be), but he didn't do much more than occasionally and halfheartedly point out disparities between the last two versions of Mitt Romney. Worse, he said things like, "You know, I suspect that, on Social Security, we've got a somewhat similar position," justifying Lehrer's otherwise needless appeal for the two men to make contrasts between them, and enabling Romney's moderate Etch-A-Sketch.

Republicans' standard response to the Obama campaign strategy of directly appealing to specific demographics -- Latinos, LGBT people, women, African-Americans, young people -- has been to claim that Obama was "slicing and dicing" the electorate. In the last few weeks, the real "slicing and dicing" (those would also be Peggy Noonan's words for it) was laid bare: Romney writing off 47 percent as helpless, useless victims. The contrast was particularly stark after a Democratic National Convention that was full of brilliant stagecraft, using personal storytelling and rousing rhetoric to make unapologetic defenses of women's and LGBT rights, the participation of people of color, the social safety net for the vulnerable, and more.

There was only a faint hint of any of this in Obama's comments yesterday. He did ding Romney on being an out-of-touch rich guy, but it was so hedging and verbose that it barely registered. ("Governor Romney, I genuinely believe cares about education, but when he tells a student that, you know, 'you should borrow money from your parents to go to college,' you know, that indicates the degree to which, you know, there may not be as much of a focus on the fact that folks like myself, folks like Michelle, kids probably who attend University of Denver, just don't have that option.") He mentioned "don't ask, don't tell" in passing.

When Obama talked about his grandmother rising from high school-educated secretary to vice president of a local bank, and then relying on Social Security and Medicare, it was both a start and a missed opportunity. Her life, he said, informed "the perspective I bring when I think about what's called entitlements," he said. "You know, the name itself implies some sense of dependency on the part of these folks. These are folks who've worked hard, like my grandmother, and there are millions of people out there who are counting on this." He could have delivered this as more than a rote recitation -- it's his own grandmother, for God's sake. He could have gone further and pointed out, as he has in the past, that his grandmother was paid less than the men at the bank, that she saw men she trained be promoted above her. He could have brought it back to his opponent by pointing out that his grandmother likely lived the last years of her life as a member of the supposedly mooching 47 percent.

He didn't. Obama allowed Romney to define the parameters of the debate. And everyone who feels left out of those borders is left today trying to understand where they fit in.