Harking back to early 2008, the president stays professorial, while Romney gets feisty – and dishonest 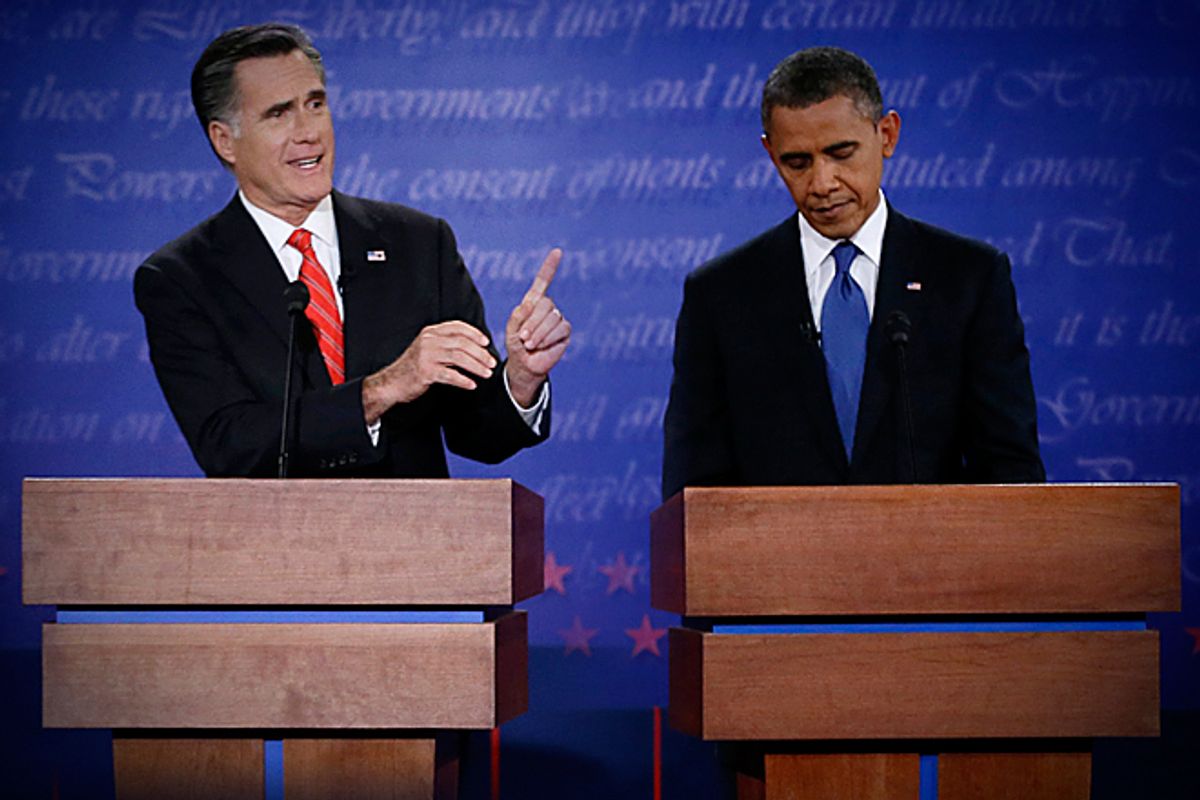 Romney shook his Etch-a-Sketch and lied his way through the entire debate with no challenge from moderator Jim Lehrer. He simply denied he has proposed a $5 trillion tax cut. He insisted he wouldn't cut the education budget or Pell Grants, when he will. He claimed the Affordable Care Act raised taxes by a trillion dollars. He essentially revived the idea of death panels by saying Obamacare established “a board that will tell people what kind of treatment they’re going to get.”  Yet the president didn't call him on any of it.

In fact, Obama let Romney off the hook on a range of toxic topics, from Social Security to the tax deductions he'd eliminate to make his tax-cut plan "revenue neutral." Some omissions seem like political malpractice. The president had many opportunities to ask Romney exactly what loopholes he'd close and which deductions he'd eliminate – child tax credit? Mortgage interest deduction? Charitable deductions? – and help Romney commit political suicide. But he never did; he went straight to the wonky idea that there are not enough loopholes to close or deductions to balance his tax cuts for the rich. He had the chance to ask Romney for his deduction-elimination plans directly, even if only rhetorically, even if Lehrer didn't follow up. But Obama never did.

He didn't challenge him on most of his lies. Romney claimed the Affordable Care Act raised taxes by a trillion dollars, and Obama didn't object; in the camera shot at that moment, he didn't even shake his head. He didn't mention Bain Capital, the Ryan budget or Romney's shameful 47 percent comments. When Romney chided Obama for not fighting for the Simpson-Bowles deficit commission recommendations, Obama didn't mention that Romney's running mate, who was on the commission, wouldn't back them either.

Unbelievably, Obama cited Social Security as an area where he and Romney agree, even though Romney's running mate Paul Ryan was an architect of Social Security privatization plans in the House, and Romney himself has suggested raising the age of eligibility and cutting benefits. That's striking fear in the hearts of plenty of Democrats. The president seemed about to score a big win when Romney admitted he wanted to shift Medicare to a voucher program for Americans under 55 -- but it was Obama who noted that Romney says he would let "traditional Medicare" exist alongside "vouchercare," taking some of the political sting out of Romney's admission. As Romney attacked Dodd-Frank banking regulations, Obama allowed that Wall Street shouldn't bear all the blame for the entire 2008 banking collapse, and he pointed to loan officers and individuals who borrowed money they really couldn't afford to, rather than stay on the topic of Wall Street greed and recklessness. As he got deep into the weeds about education and work readiness, he gave Romney credit for agreeing with his popular ideas on community colleges.

Overall Obama was off his game. He stumbled with "ums" and "uhs," looked down at the podium instead of at the camera, framed his statements as hypotheticals not declarations, even apologized to Lehrer for going long with his remarks when Romney just barreled over the moderator. I found myself wondering if he was preoccupied by either a national security crisis (Turkey and Syria are firing at one another) or family troubles; I hope neither is true, but it would explain his subdued performance.

Romney was smug and arrogant, condescending to Obama and Lehrer. Unbelievably, he compared Obama to one of his sons when accusing him of misrepresenting his tax plan. “Look, I’ve got five boys -- I’m used to people saying something that’s not always true but just keep repeating it and ultimately hoping I’ll believe it. But that is not the case.” Maybe our first black president can't shoot back "I'm not one of your boys," but I wish Lehrer had noted the insult.

Let me admit: I wasn't sure Barack Obama won all of his debates with John McCain in 2008. Some of his answers were too long and convoluted. But what mattered most was McCain wandering around the stage, looking lost, or calling Obama "that one."

It's possible some things will matter more than they seem to tonight: Romney's arrogant smiles and smirks, or his saying to Lehrer that though "I love Big Bird; I actually like you," he'd fire them both and zero out the PBS budget. Americans love Big Bird. What a loon. He smirked regularly and once even giggled at his fine performance. He made it clear that he was Lehrer's boss early, and treated him disrespectfully. For a guy Americans don't find likeable, he wasn't terribly likeable.

In the days to come, Romney may suffer from the perception of his condescension, his lying and his cruel assault on Big Bird. But for now, it seems the president missed the opportunity to put his opponent away for good.