Where was populist Obama at the debate?

The president ceded crucial ground on Social Security, Simpson Bowles and the deficit, and downplayed jobs 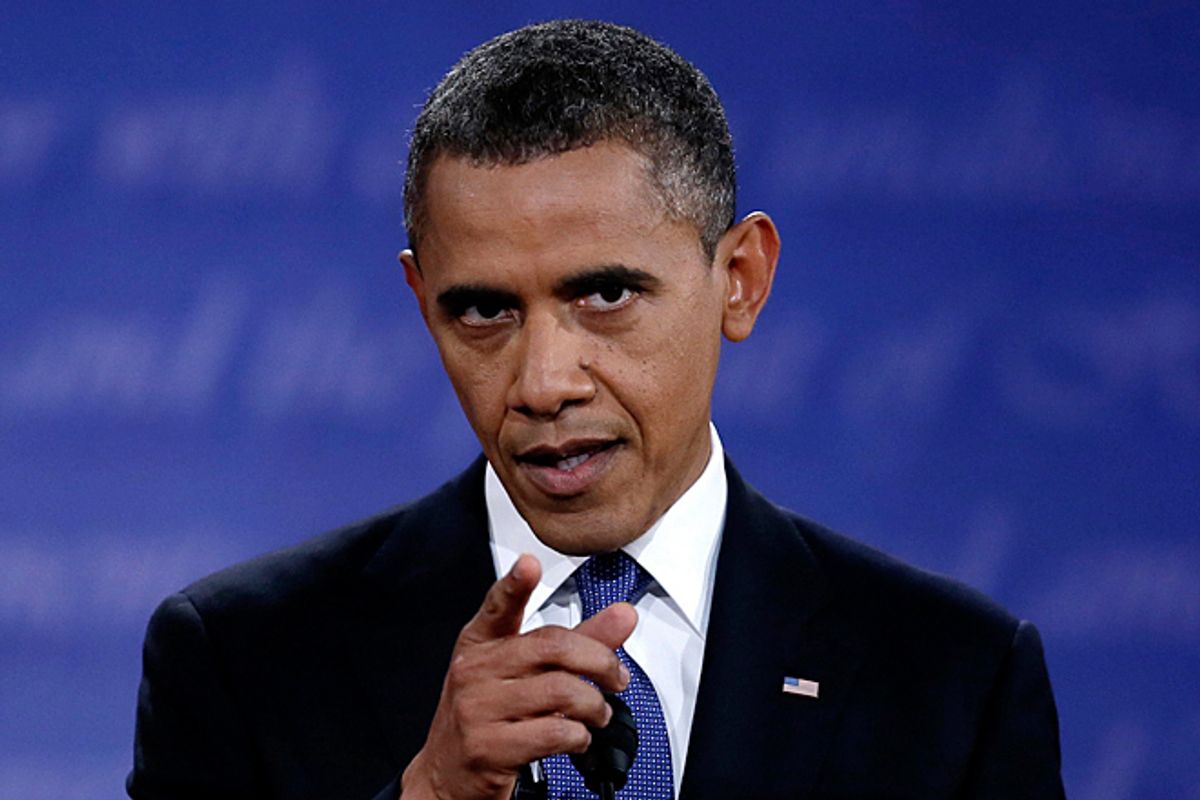 Some of my friends on MSNBC might have gotten a little too riled up about the president's lackluster performance in Wednesday night's debate, while some of my friends in the die-hard Obama defender camp are a little too quick to dismiss it. Steve Kornacki probably puts it best, in a piece that says Obama clearly lost, but it may not hurt him much politically: "Obama was elected president despite being lousy in debates, so who’s to say he can’t be reelected with the same trait?"

Politics aside, I want to zero in on the substance of what bothered me about Obama's performance. I am bewildered about why he embraced Mitt Romney on the issue of Social Security, and let the entire first section of the debate, which was supposed to be about jobs, get derailed into a discussion of taxes and the deficit.

Now, you can say Obama isn't a demagogue, and red-meat rabble-rousing populism doesn't come naturally to him. He may believe he and Romney would do the same thing on Social Security. But he has no reason to give Romney the benefit of the doubt on it. None. He has every right, in fact every duty, to tie Paul Ryan around his neck in every debate. Ryan led the charge to privatize Social Security. Romney himself has proposed raising taxes on it and perhaps hiking the age of eligibility. Given the importance of both Social Security and Medicare to Obama's lead in states like Ohio and Florida, giving Romney the benefit of the doubt on Social Security is political malpractice.

Equally disturbing was the fact that Obama was the first one to mention the word "deficit" – and it was during the jobs portion of the debate. That seemed to perfectly recapitulate his self-destructive pivot to the issue of the deficit, and away from the crisis of joblessness, in 2010. He praised the Simpson Bowles commission recommendations, some of which would be a disaster both economically and politically. (He also neglected to mention that Simpson Bowles member Paul Ryan didn't back the commission's proposals.) My biggest worry about Obama's reelection is that he'll ignore signs that it was a mandate to protect Social Security and Medicare and instead use his political capital to wrangle a deficit-cutting, Democrat-shaming "Grand Bargain." He all but admitted that in the debate.

And were women's issues mentioned even in passing? Women may be the most crucial voting bloc to Obama, and he didn't even find a way to work them in during the healthcare debate. Merely stating "Under my plan, being a woman is no longer a preexisting condition" would have gotten people in the audience to disobey poor Jim Lehrer's no applause rules. (They should have anyway, since Romney was defying Lehrer without penalty.)

I worry that Obama looks at Romney politically (despite reports that he dislikes him personally) as a guy straight out of his 2008 dreams about "Obamacans" – a moderate Republican who rejected his party's extremism on both cultural and (some) economic issues, and who could work with Democrats on issues like healthcare reform, education and the environment. The kind of Republican that doesn't exist anymore, and if Romney ever truly represented that model, he doesn't today. Yet the president seemed to be giving him the benefit of the doubt.

The point is: You don't give Mitt Romney the benefit of the doubt. Ever. The man has lied his way through the campaign. We really have no idea what he would do as president. The glimpse of his personality and his politics we got at that Boca Raton fundraiser where he slurred half the country should have stiffened Obama's spine.

Have Republicans gotten into the president's head with their accusations of class warfare? (No, I don't think he was rattled by Tucker Carlson's racial panic meltdown. He's a serious man.) Has he had a relapse of the commitment to bipartisanism at any cost that made much of his first term so frustrating?

Or was he, as so many allies said Wednesday night, playing rope-a-dope, letting the hyped-up Romney lie and bully his way through the debate, the better to hang him with his words in political ads, and strike back in a later debate? But rope-a-dope normally involves throwing a few rounds in order to come back and win the fight. I think it's dangerous to throw a fight hoping to win the next one.

But far more important than whether he won the debate were signs that Obama's cautious centrism and willingness to entertain cuts to Medicare and Social Security have returned. I hope I'm wrong about that.