First in war, first in peace, first in the National League

Washington, D.C., has always had a tortured relationship with baseball -- until now 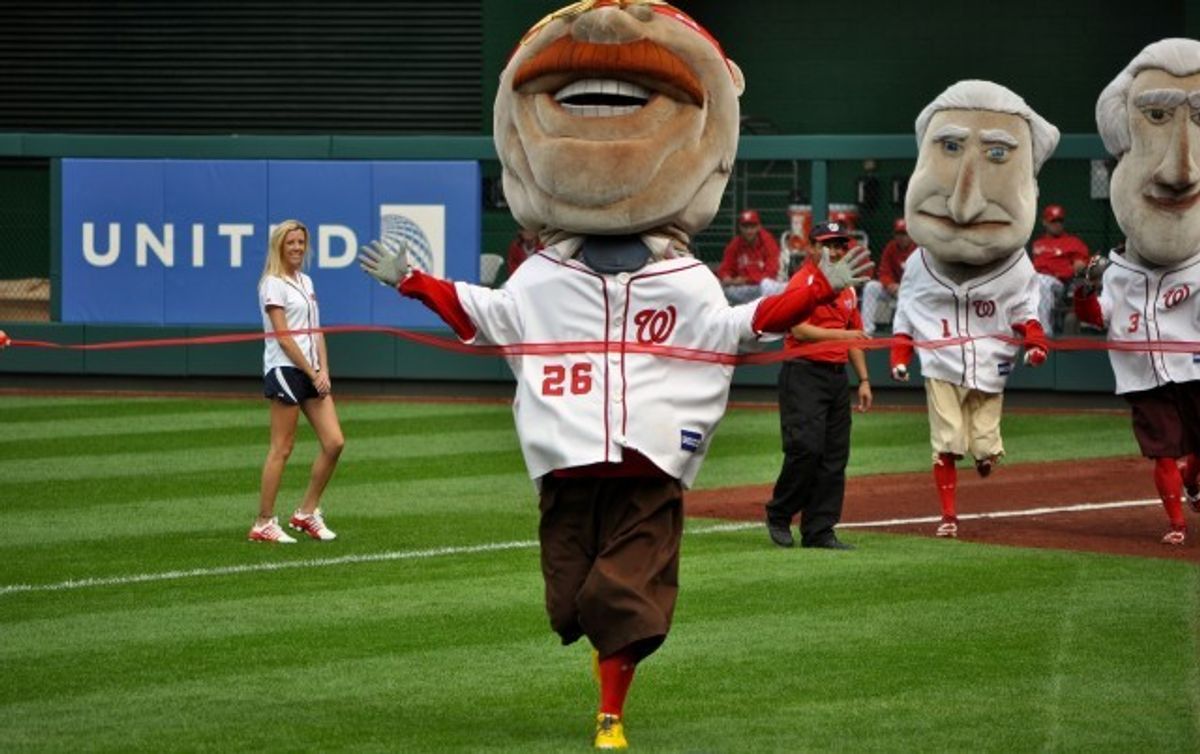 It’s a blazing hot Sunday afternoon on Half Street, Southeast, just outside of Nationals Park. The heat is nothing new for D.C., though. Washington’s summer scorchers were well known to even the capital’s earliest residents — an assemblage of land speculators, slaves, and government workers — but this Sunday feels especially sticky and unbearable. Not even the breeze off the Anacostia River helps. Despite the weather, packs of baseball fans crowd Half and First and N streets, many clad in sweat-stained jerseys and red wool hats stitched with a curly “W.” Vendors mill around makeshift tents and collapsible tables set up along the sidewalks; some stands teem with T-shirts and jerseys, some with bottled water, “ice cold, ice cold,” and some with the traditional peanuts and Cracker Jacks. Unanchored entrepreneurs roam the area, their arms lined with knockoff caps, hawked to the tirelessly repeated tune, “Five dollars, get your five-dollar hat here, five dollars.” Streams of potential buyers file off the humid, underground Navy Yard Metro, up the station’s escalators, and out into the daylight. Scalpers wade through the crowds chirping, “Tickets, tickets, tickets.”

All of these people, crammed together and sweating, smiling and swilling water and beer, boisterous, exuberant in a way D.C. denizens often are not — ties loosened, collars unbuttoned — these people have come for Washington Nationals baseball. They’ve come to see rookie phenom Bryce Harper belt a tape-measure home run; to see pitching ace Stephen Strasburg rack up the Ks. When the Washington Senators were moved to Texas in 1972, the nation’s capital became a baseball wasteland, no longer having a team to call its own. Senators fans were left out in the cold while the Baltimore Orioles, the District’s northern baseball rival, enjoyed some of their best years — years in which they made multiple playoff runs. For major league baseball fans in Washington, it’s been 79 years of waiting for another postseason appearance. The last time they made it to the playoffs, Herbert Hoover was just leaving the first air-conditioned Oval Office. This Sunday, the wait ends.

In 1886, four years after the Orioles ball club flew into Baltimore, the District was granted its first professional team, the Washington Nationals. The team played at the Swampoodle Grounds (now the Union Station National Visitors Center), which, as far as names go, was an early advantage over the Baltimore team’s blasé field, Oriole Park. Unfortunately, that was about the only advantage the D.C. team had; for the four years of their existence, the Nationals compiled a stunningly bad .326 winning percentage before being reconfigured in 1891 as the Washington Statesmen. One season later, the team was again renamed, this time as the Senators, and moved to Boundary Field, which would eventually burn to the ground, a symbol of the team’s continued and complete futility. While Washington struggled, the Orioles finished three seasons in first place and won two championships. By 1899, though, with both teams sinking fast, the National League “contracted” the Orioles and Senators out of existence.

Here, the two cities’ baseball fates diverge. With the founding of a new major league, the American, in 1901, Baltimore and D.C. were each initially granted a charter franchise, simultaneously returning baseball to both. While the Senators continued their losing ways, it was the Orioles who, only two seasons later, were shipped off to New York, leaving Baltimore without major league baseball for the next 51 years. Though the new Senators’ first ten years were tumultuous — the team’s official name changing back to the Nationals for two seasons before unofficially being abandoned in favor of the nameless “W” logo that persisted for the next 52 years — by 1911, the team was finally showing promise, and, despite a few bumps in the road, by 1924, it had captured its first world championship. Sadly, it would be their only championship. Their next few years were up and down, culminating in a 1933 five-game World Series loss to the New York Giants. From then on, it was downhill. By 1954, the perennial losing had become so unbearable as to produce the book The Year the Yankees Lost the Pennant, better known for its 1955 Broadway adaptation, Damn Yankees, which centers on Joe Boyd’s Faustian pact to bring the Senators just one more championship season. It was that bad.

As the Washington team remained mired at the bottom of the barrel, Baltimoreans saw the rebirth of their city’s major league baseball dreams in 1954. Success wasn’t immediate for the new Orioles, but by the mid-’60s, the Glory Years were upon them, and despite a couple of rocky periods, the team remained contenders through the late ’90s, breeding stars such as Frank Robinson, Eddie Murray, and hometown hero Cal Ripken Jr. While the northern O’s were thriving, the Senators were again axed, shipped off to Minnesota at the end of the 1960 season. Oddly enough, the departed Senators team was immediately replaced with a second, this time officially named, Senators franchise. Any hope of better days ahead was short lived, though. Within ten years, as futile as ever, this second franchise would also be gone. This time, it was Washington that was left without a major league team, while the rival Orioles strutted through their glory years, heads held high.

After so long without a home team, excitement was palpable in 2005 when D.C.’s then-mayor, Anthony Williams, publicly declared: “Baseball is about our way of life. It’s about community. It’s about opportunity. And now, with the Nationals, it’s about our nation’s capital.” Baseball was coming back to Washington. How it returned, though, was anything but simple.

In 2002, Major League Baseball bought the Montreal Expos, hoping to contract them out of existence alongside the Minnesota Twins. Soon, MLB discovered that, legally, they couldn’t contract the Twins, and therefore couldn’t contract the Expos or they’d have an uneven number of teams. So the decision was made to move the Expos to a new home. From a long list of potential candidates, including San Juan, Puerto Rico, and Monterrey, Mexico, not to mention closer-to-home locales such as Virginia, New Jersey, and North Carolina, Washington was selected as the winner. In late 2004, the owners of the other 29 MLB teams voted on the chosen location. The result: 28-1 in favor of the District. The lone dissenting vote: Peter Angelos, owner of the Baltimore Orioles, who stated that there were no baseball fans in Washington, D.C. That belief, he said, is a fiction. Angelos’s dissenting vote felt like an especially sharp stab in the back given that it was the Griffith family, owners of the old Senators, who allowed the Orioles to return to Baltimore in 1954.

To appease an infuriated Angelos, MLB commissioner Bud Selig struck a “corrupt bargain,” giving him, among other things, rights to the Nationals’ television and radio broadcasts, making the D.C. team the only in MLB not to own their own rights. For the first two years of the Nationals’ existence, Washington-area fans could barely even find their team on TV.

Politics and sports have long been associated in the nation’s capital, and fans of Washington's teams are used to suffering, not only on the field but through banal political jokes, as well. A typical example goes like this: “You know why your baseball team changed its name to the Nationals instead of keeping it the Senators?” Long pause. “The people said there are already too many senators in Washington — they don’t need nine more on Capitol Hill.” One-sided, boisterous laughter usually follows. A particularly popular newspaper swipe at the early Senators was “First in war, first in peace, and last in the American League,” a slogan that, for the later Senators team, was adapted to: “… still last.”

Not anymore, though. On Thursday, September 20, 2012, Nationals closer Drew Storen threw the game’s final pitch past Hanley Ramirez, striking out the heart of the Dodgers’ lineup and securing his team’s return to the playoffs. Storen bounced off the mound, pumping his fist into his glove as his teammates poured onto the field. Red and white fireworks burst in the air, exploding against a black night sky. Scoreboards around the park flashed “Nats Clinch” in large block letters. Fans stood and cheered, many holding signs with proclamations such as “Playoffs Baby!” Under the direction of ex-Orioles player and manager Davey Johnson, riding a stable of stellar pitching arms, including Cy Young candidate Gio Gonzalez, and bolstered by a mix of young and old talent — Gold Glover Ryan Zimmerman, ex-Phillies outfielder Jayson Werth, homerun hitter Michael Morse, and MVP candidates Ian Desmond and Adam Laroche — the 2012 Washington Nationals accomplished what a lifetime of D.C. baseball teams could not. They finished in first place (with a .605 winning percentage), captured the National League East pennant, and boasted the best record in all of baseball. Sunday, with their first playoff game, they begin the quest for a second World Series title; if that ever-elusive, ultimate goal is attained, it would be the first time for a D.C. team in 88 years.

Whatever may come, the excitement in Washington is palpable. Mayor Vincent Gray has ordered that city hall, which sits just blocks from the White House, be bathed in red light each night for the duration of the home team’s playoff run. Even the local journalists have a new headline: “First in war, first in peace, and finally first in the N.L. East.”