Mitt says his comments disdaining half the country were "completely wrong." Will he get away with it? 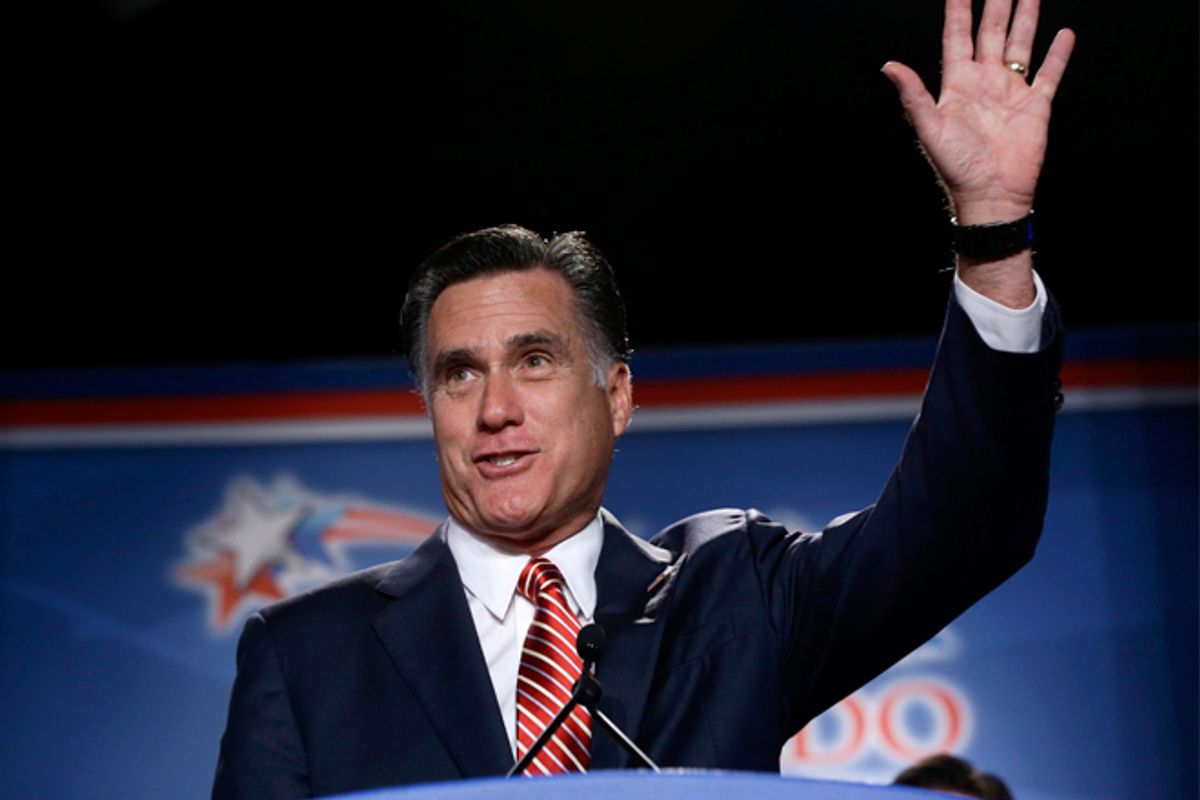 Mitt Romney clearly thinks he can get away with this extreme makeover. After lying through his first debate with President Obama, denying that he plans a $5 trillion tax cut, claiming he'll preserve the most popular features of Obamacare, and feigning empathy with the poor and unemployed – after all of that, now he's telling Fox News that his remarks calling the 47 percent of Americans who pay no federal income taxes "victims" who won't "take personal responsibility and care of their lives" were "completely wrong."

Let's remember: When those invidious comments came, out thanks to Mother Jones, Romney neither denied them nor distanced himself. He merely called them "not elegantly stated." In a later conversation with reporters, he explained that he was merely trying to express the difference "between a government-dominated society and a society driven by free people pursuing their dreams," but he wouldn't admit there was anything wrong with what he was expressing except maybe that he put it poorly.

Clearly in a campaign with hundreds if not thousands of speeches and question-and-answer sessions, now and then you are going to say something that doesn’t come out right. In this case I said something that’s just completely wrong. And I absolutely believe, however, that my life has shown that I care about 100 percent. And that has been demonstrated throughout my life.  And this whole campaign is about the 100 percent. When I become president it will be about helping the 100 percent.

Mitt's trying to tell us he loves the 47 percent. He loves the 100 percent!  Remember, he told us "I love Big Bird," too, just before he promised to fire Big Bird, or at least get him off the government payroll. In Tampa, Ann Romney squealed "I love you women!" to sell her husband's anti-women economic and  health policies. Do these people really expect to be believed?

I guess it depends on how the media responds. Wouldn't a follow-up be "Tell us what, exactly, in what you said, was 'completely wrong', Governor Romney?" Because let's review exactly what he said on the topic of the 47 percent:

There are 47 percent of the people who will vote for the president no matter what. All right, there are 47 percent who are with him, who are dependent upon government, who believe that they are victims, who believe the government has a responsibility to care for them, who believe that they are entitled to health care, to food, to housing, to you-name-it. That that’s an entitlement. And the government should give it to them. And they will vote for this president no matter what … These are people who pay no income tax …. [M]y job is is not to worry about those people. I’ll never convince them they should take personal responsibility and care for their lives.

Who exactly were you thinking about when you said "those people" don't "take personal responsibility and care for their lives"? And do you now believe you have to "worry about those people"?

Romney went even further on Hannity, insisting that he, not Obama, is the candidate who cares about the poor.

The gap between the rich and the poor has gotten larger. The rich will probably do fine if he is reelected. It is the middle class that is in real trouble. And the poor. I want the poor to get into the middle class. So many have fallen into poverty by virtue of his policies. So this for me is all about the 100 percent.

Remember when Romney said "I'm not concerned about the very poor"? Now he's saying, "I love you, poor!" Of course, blaming Obama for the widening gap between rich and poor is, well, rich, since it's entirely attributable to Republican policies over 30 years that have slashed tax rates on the top 1 percent while also creating ever-new ways for them to amass wealth.

I don't know why the right is letting Romney get away with his latest flip-flops, since Republican National Committee Chairman Reince Priebus praised Romney's 47 percent remarks as on message. The entire 47 percent meme comes from bully-boy Eric Erickson, the man who once called former Supreme Court Justice David Souter "a goat-f&^*king child molester" and still works for CNN. He started a blog, "We are the 53 percent" (who pay federal taxes) to mock the stirring "We are the 99 percent" blog begun by Occupy Wall Street supporters. The only unusual thing about Romney's remarks was that he got caught making them. But now Romney's backing away from them -- with absolutely no pushback from the right, which of course hates Obama so much that apparently they will tolerate more flip-flopping from Romney to win an election.

Still, it's clear we're living through the belated, general-election incarnation of "Moderate Mitt." It's more like "Mendacious Mitt." On MSNBC's "Now With Alex," Alex Wagner asked if Mitt can half shake the Etch-A-Sketch. I realized I had another image: New Mitt is like that "restored" Spanish fresco: Not recognizable as anything realistic, and ugly to boot.