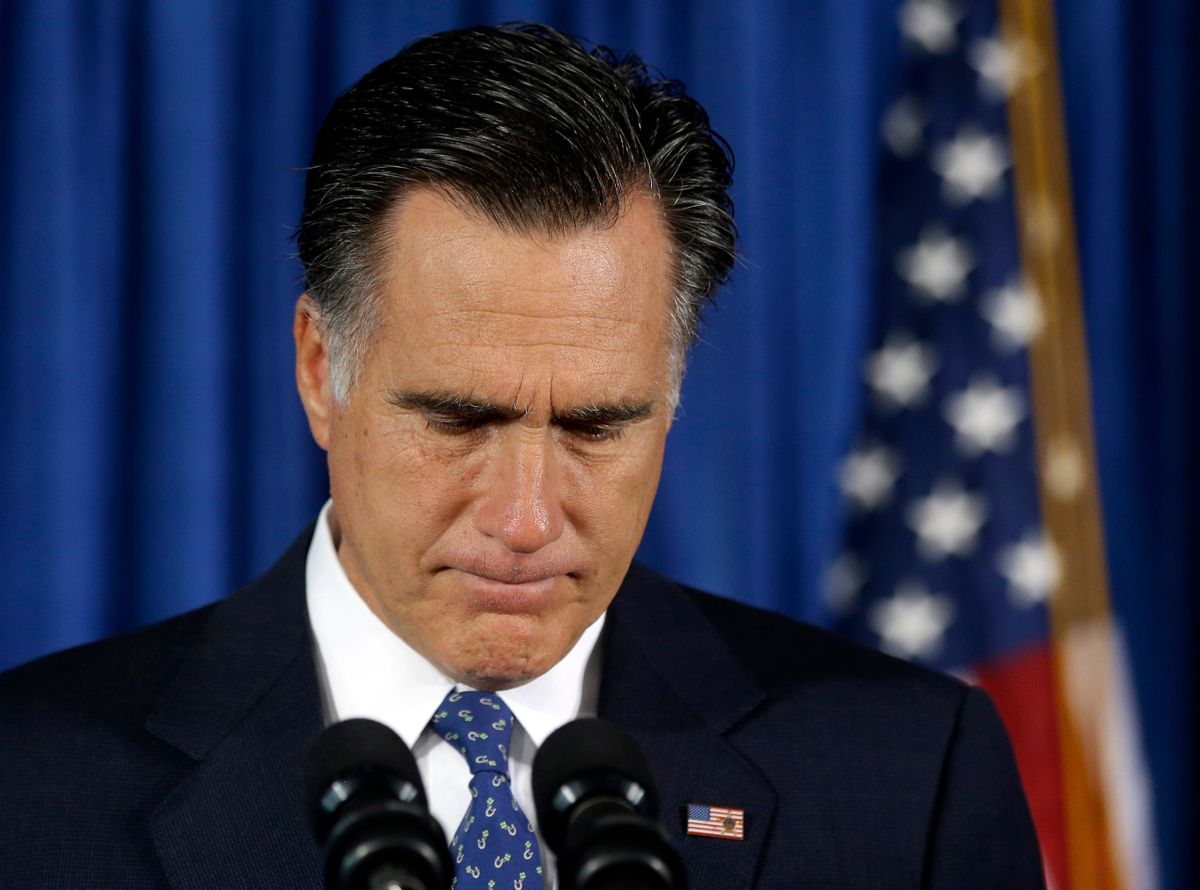 Republicans like to paint Romney as an entrepreneur whose activities at Bain Capital have benefited Americans. In a campaign full of whoppers, that’s one of the biggest lies of all. Economist Paul Davidson recently pointed out the truth on AlterNet: “Romney has spent his career offshoring and outsourcing American production processes -- and associated jobs -- to countries like China where human labor is valued in the market at a very low wage rate.” The sub-human conditions at these production facilities represent things that Americans are strongly opposed to: child abuse, squalor, forced overtime, and peanuts for pay.

Romney’s penchant for bragging about his business activities at fundraisers helps underscore just how vile his brand of capitalism really is. While CEO of Bain, Romney invested in a Chinese sweatshop which he appears to be describing in detail at the very same Boca Raton fundraising event where he made his infamous case that nearly half of all Americans are freeloaders.

A report recently released by the Institute for Global Labor and Human Rights reveals that while Romney was deeply invested at a firm called Global-Tech, low pay and horrific conditions were status quo at its Chinese appliance factory.

Was Romney aware? Let’s take a look at the presidential hopeful's own words:

“When I was back in my private equity days, we went to China to buy a factory there. It employed about 20,000 people. And they were almost all young women between the ages of about 18 and 22 or 23. They were saving for potentially becoming married. And they work in these huge factories, they made various uh, small appliances. And uh, as we were walking through this facility, seeing them work, the number of hours they worked per day, the pittance they earned, living in dormitories with uh, with little bathrooms at the end of maybe 10, 10 room, rooms. And the rooms they have 12 girls per room. Three bunk beds on top of each other. You've seen, you've seen them? (Oh…yeah, yeah!) And, and, and around this factory was a fence, a huge fence with barbed wire and guard towers. And, and, we said gosh! I can't believe that you, you know, keep these girls in! They said, no, no, no. This is to keep other people from coming in. Because people want so badly to come work in this factory that we have to keep them out.”

Charles Kermaghan, director of the Institute for Global Labour and Human Rights, asks: “Does Mr. Romney seriously believe that young men and women in China are racing to climb over fortress-like walls topped with barbed wire, just to get a poorly paid job at Global-Tech? Or is it possible that the barbed wire and armed guards are meant to lock the Chinese workers in and strip them of their legal rights?”

From April 1998 through August 2000, Romney and his Brookside Capital Partners Fund, a Bain affiliate, poured around $23 million into the Global-Tech sweatshop in Dongguan, China. Among the details outlined in the report were the following:

On Feb. 16, 2012, Mitt Romney brought hypocrisy to new heights, assuring the public that “We will not let China steal jobs from the United States of America.”

In reality, Romney has done everything in his power to profit from offshoring and outsourcing that evaporate decent jobs in America and keep workers in places like the Chinese Global-Tech appliance factory in a state of utter misery.