Turkey and Syria on the brink 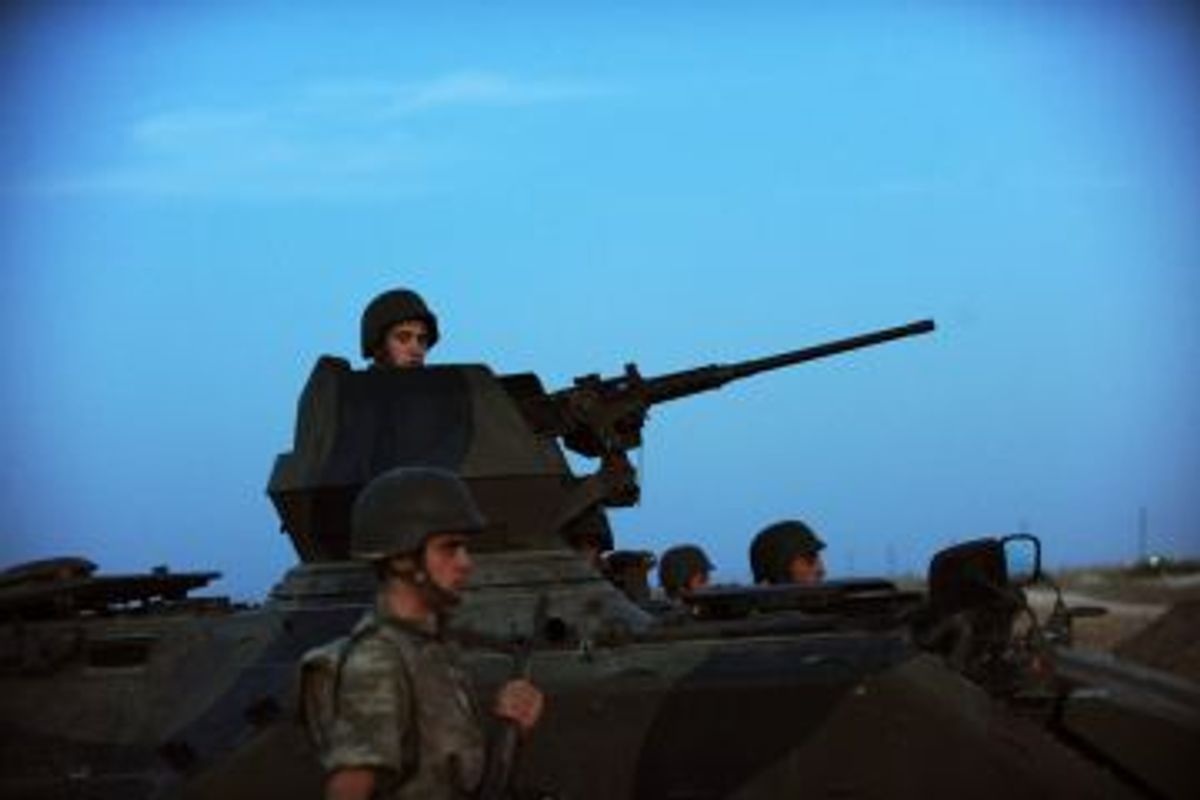 “We are not interested in war, but we're not far from it either," Erdoğan said in a speech in Istanbul on Friday.

According to Turkish reports, the country is attempting to establish a buffer zone around the border, calling on the Syrian military to stay 10 kilometers away from the Turkish side.

While there have a been a number of cross-border incursions since the civil war in Syria broke out, the two countries appear the closest yet to a full confrontation. Syria’s conflict has perhaps weighed the heaviest on Turkey, which has taken in hundreds of thousands of refugees and is dealing with an increasingly vocal — and violent — Kurdish independence movement along its borders.

Despite reassurances from their leaders, Turkish citizens demonstrated against any possible war in Istanbul on Thursday and Friday. Protesters outside of parliament in Ankara and in Istanbul chanted “no to war,” and #savasahayir (Turkish for “no to war”) has been trending on Twitter.

Zeynep Yildiz, who lists herself as a student in Istanbul on Twitter, wrote: “Hey World!! Everybody following the worldwide trending topics #savasahayir (#NoToWar) and #Turkey! We Turkish people don't want this war!”

The increased hostilities could mark a new phase of the Syrian conflict. Some observers say a buffer zone would give the Syrian rebels a better safer area inside the country. It’s an open secret that Turkey has allowed rebels and arms to pass back and forth across its border and the Syrian National Council, a coalition of political opposition groups that is running a kind of government in exile, is based in Istanbul.

The authorization of military action would also allow Turkey to more forcefully quell any uprising by the Syrian Kurds, which live primarily in Syria’s north, along Turkey’s border. Some factions of the Syrian Kurds have voiced their desire to carve out an autonomous region, similar to Iraqi Kurdistan, in the aftermath of the Syrian conflict.

Kurdish autonomy so close to home would surely irk Turkey, which has fought Kurdish rebels, known as the Kurdistan Workers’ Party, or PKK, for decades. The PKK fights for an independent and united Kurdish region spanning Turkey, Iraq, Syria and Iran. Turkey, the U.S. and the EU have listed the PKK as a terrorist organization.

Nur Batur, a senior Turkish journalist, said at the moment the military authorization appears only to be a warning to the Syrian government. But the bill’s broad language could be used as a pretext to strike Kurdish militants. The PKK has reportedly raised its flags along parts of the Turkish border.

Turkey already has a similar bill that allows Turkish forces to enter Iraq. The parliament will vote on an extension of that bill next week. Turkish soldiers have entered northern Iraq a number of times to strike Kurdish fighters based there.

“The government now has a much freer hand against the PKK attacks in the northern part of Syria,” Batur said.

The vote for military action was convened Thursday in an emergency meeting after shells fired from Syria into Turkey killed a mother and four children in the town of Akcakale. It is not the first time the town was hit, but it is the first time the shelling killed Turkish citizens.

Violence soared this summer between PKK rebels and Turkish troops, killing upwards of 1,000 people. The conflict between the Kurds and Turkey began in 1984 and has so far killed more than 40,000 people.

Turkish officials blame the unrest in Syria for emboldening the PKK. Ankara already warned it might take military action in Syria if the PKK would attack from Syrian soil, Reuters reported last month.

Hüseyin Çelik, deputy chairman and spokesperson for the ruling Justice and Development Party, assured citizens on Thursday that Turkey is not interested in war.

“I want to remind the Turkish citizens that they should not be in a panic about a possible war,” he said, according to Anadolu Agency, a semi-official news organization in Turkey.

Batur said neither country has anything to gain by widening the conflict:

Whatever Syria is saying — that it is an accident — it seems they’re telling the truth, because the moment Turkey gets involved in Syria, it may be the end of the Assad regime. On the other hand, Turkey would not want to get into a war either because of the public opinion, and it will really shake the Turkish economy.

Turkey’s economy has skyrocketed over the last few years. Economic growth was well over 8 percent in 2011, shielding the country from much of the unrest that has swept the neighboring Arab world during the last two years.