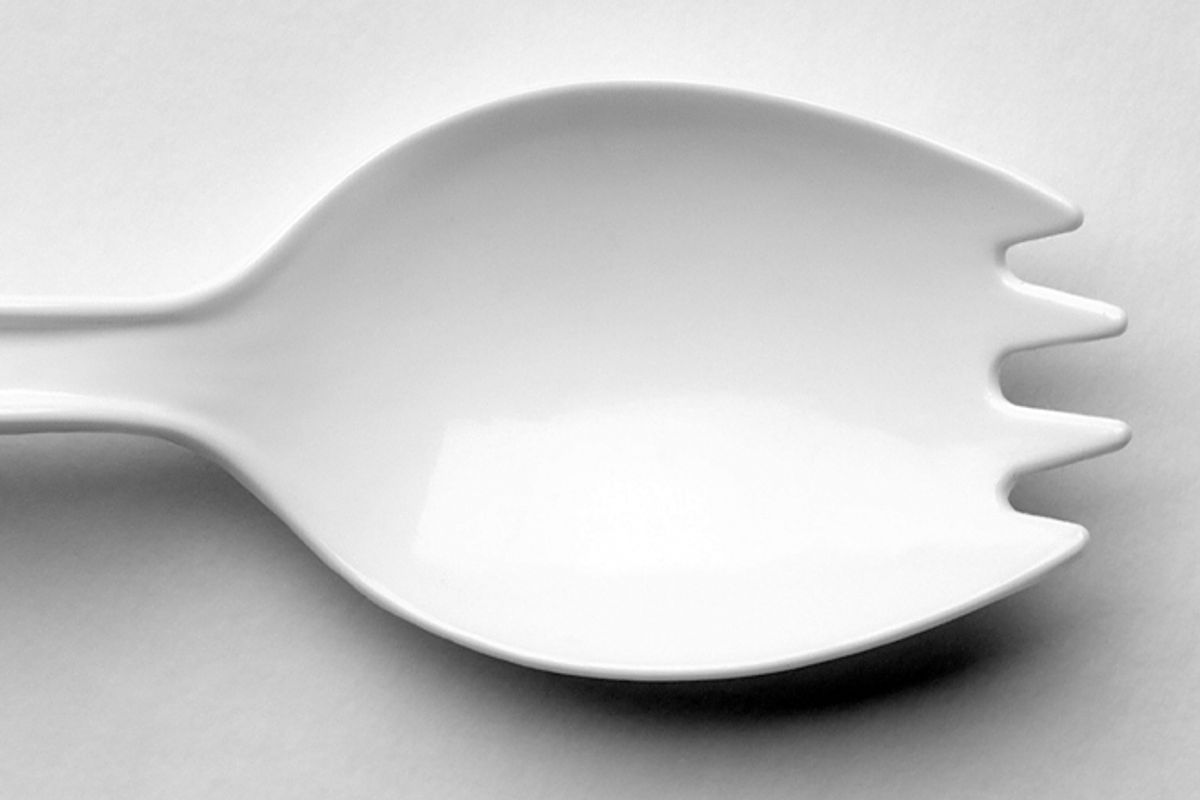 Excerpted from "Consider the Fork: A History of How We Cook and Eat"

Table utensils are, above all, cultural objects, carrying with them a view of what food is and how we should conduct ourselves in relation to it. And then there are sporks.

The term "spork" is first recorded in a dictionary in 1909, though the first patent for one was only issued in 1970. Both the word and the thing are a hybrid of spoon and fork. Like a pencil with an eraser on the end, the spork is what theorists of technology call a “joined” tool: two inventions combined. In its classical form — fashioned from flimsy disposable plastic and given away at fast-food outlets — the spork has the scooping bowl of a spoon coupled with the tines of a fork. It is not to be confused with a Splayd (knife, fork and spoon in one), a knoon, a spife or a knork.

Sporks have developed an affectionate following of a somewhat ironic kind in our lifetime. There are several web sites devoted to them, proffering tips on use (“Bend the prongs inward and outward and stand the spork on end. This is a leaning tower of spork.”), haikus in their honor (“The spork, true beauty / the tines, the bowl, the long stem / life now is complete”) and general musings. Spork.org has this to say:

A spork is a perfect metaphor for human existence. It tries to function as both spoon and fork, and because of this dual nature, it fails miserably at both. You cannot have soup with a spork; it is far too shallow. You cannot eat meat with a spork; the prongs are too small.

A spork is not one thing or another, but in-between. In the Pixar-animated film "Wall-E," a robot in a postapocalyptic wasteland attempts to clear up the detritus left behind on planet Earth by the human race. He heroically sorts old plastic cutlery into different compartments until he encounters a spork. His little brain cannot cope with this new object. Does it go with the spoons? Or the forks? The spork is uncategorizable.

Two years into his presidency, in 1995, Bill Clinton, pioneer of Third Way politics, made the spork the centerpiece of a humorous speech to the Radio and Television Correspondents’ Dinner in Washington, D.C. He claimed that the spork was “the symbol of my administration ... No more false choice between the left utensil and the right utensil.” He ended the speech to rapturous applause and laughter: “This is a big, new idea — the spork!”

Clinton was being funny, but the spork in its way really is a big, new idea. Where did it come from? An urban myth circulates that sporks were first invented by Gen. Douglas MacArthur as part of the U.S. occupation of Japan in the 1940s. The story goes that MacArthur decreed that chopsticks were barbarian tools, whereas forks were too dangerous (the fear being that the conquered Japanese might rise up and use them as weapons). Therefore, the spork was forced on the Japanese as a safe, truncated version of Western tableware.

This story cannot be right — as mentioned above, the term "spork" dates back to before 1909, and the form itself is still older: In 19th century American silverware, both terrapin forks and ice-cream spoons were sporks in all but name (they were also known as “runcible spoons” after the Edward Lear poem). It is true that as far back as World War I, various armies used foldable spoon-fork combinations in the mess kit. However, these were not true sporks but rather a spoon and a fork riveted together at the handle. These utensils are still used in the Finnish military: They are made from stainless steel and called Lusikkahaarukka, meaning spoon-fork.

The urban myth about MacArthur and the Japanese possibly arose because the first person to create a hybrid fork-spoon for the mass market was another McArthur, an Australian named Bill McArthur, of Potts Point, New South Wales, who in 1943 launched his patented Splayd — derived from the verb "to splay" — after seeing a magazine photo of women awkwardly balancing knives, forks, and plates on their laps at a party. Boxes of stainless-steel Splayds — which described themselves as an “all-in-one knife fork and spoon gracefully fashioned” — were marketed as the ideal solution to the newly popular Australian barbecue. They have since become an Aussie institution, having sold more than 5 million units.

In the 1970s, Splayds were finally joined by Sporks. The name was trademarked in 1970 by a U.S. company (the Van Brode Milling Company) and in 1975 by a U.K. one (Plastico Ltd.) as a combination plastic eating utensil. It wasn’t long before they became standard issue in fast-food restaurants. The spork made business sense: two plastic utensils for the price of one.

Other important users of the spork included schools and prisons and any other institutional setting where the business of feeding is reduced to its most basic, functional level. American prison sporks are generally plastic, orange in color and very ineffectual because it is vital that they should not be used as weapons. In 2008, a man was arrested in Anchorage, Alaska, for attempting an armed robbery with a spork from a fried-chicken restaurant. The victim’s body was gashed with four “parallel scratches.” The most remarkable thing about this story is that anyone could have managed to do such damage with a spork, which in its fast-food incarnation is a pitiful implement, splintering into plastic shards on contact with any remotely challenging food.

In 2006, the spork was given a radical reboot in an attempt to address some of its structural shortcomings. Joachim Nordwall is a Swedish designer employed by the outdoor supplies company Light My Fire. Having grown up in Sweden, Nordwall had no background in using the fast-food spork, and he was not much impressed by it. “It feels like a compromise to me,” he noted (to which one is tempted to say: duh!). The tines did not work well on their own terms as a fork. Nor did the bowl really work as a spoon: When eating soup, it would dribble out through the gaps. Nordwall’s breakthrough was to separate out the spoon part and the fork part, placing them on opposite ends of the handle. For good measure, he added a blade to the outer edge of the tines, thus turning his construction into a sort of knork as well as a spork. “Sporks get a new look,” raved a business review of Nordwall’s design. Really, though, it was very old. Nordwall had reinvented the double-ended medieval sucket spoon.

There is now a spork for every occasion, except a meal where any degree of formality is required. Light My Fire sells brightly colored sporks for campers and sporks for office workers, “lefty” sporks for the left-handed, and “spork little” for toddlers. Unlike previous utensils, which always carried with them some cultural expectation of how you should behave in relation to food, the spork is entirely devoid of culture. It bends itself to the owner, rather than the other way around. It carries with it no particular mores and demands no etiquette. Eating with a spork is neither mannerly nor unmannerly. One of the many spork tributes on the Internet has fun with the notion of table manners for “sporkware,” advising: “When using a spork to eat mashed potatoes out of a Styrofoam container, it is common courtesy to leave a little ‘spork waste’ at the bottom rather than scrape the styrofoam with the spork to get every last morsel. If you must have every little bit of potato, please use your finger.”

Excerpted with permission from "Consider the Fork: A History of How We Cook and Eat" by Bee Wilson. Available from Basic Books, a member of The Perseus Books Group. Copyright © 2012.

Bee Wilson is an award-winning food writer, historian, and author of four books, including Consider the Fork and Swindled. She has been named BBC Radio’s Food Writer of the Year and writes about food and other subjects for a wide range of publications including The Guardian, The London Review of Books, and the New Yorker Page-Turner blog. Wilson lives in Cambridge, England.